Neutral Milk Hotel's In the Aeroplane Over the Sea was the soundtrack of my childhood. 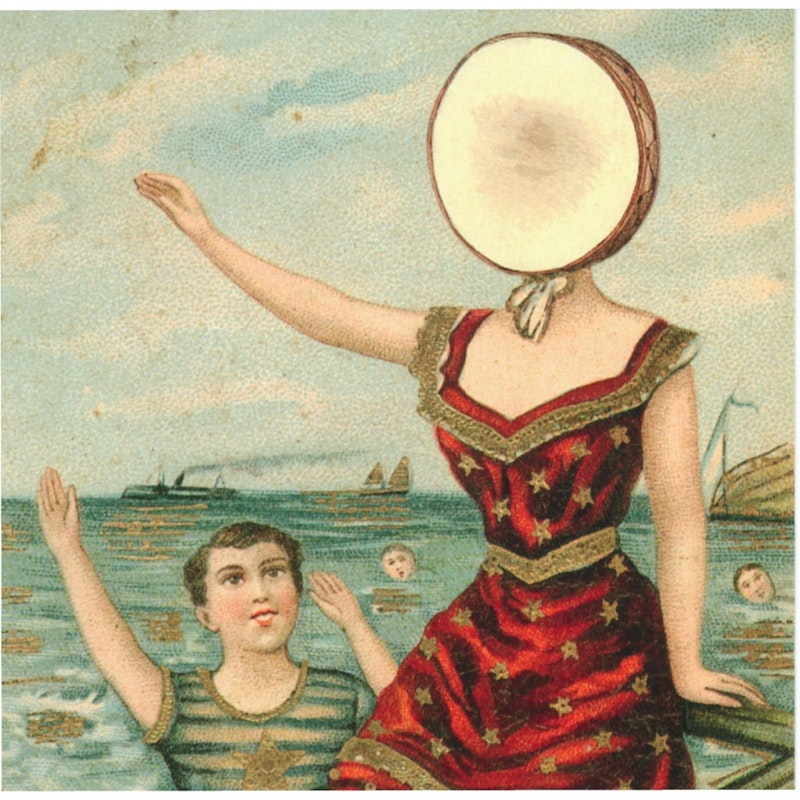 The first time I heard Neutral Milk Hotel, I was driving back from a friend’s home in Calabasas. He gave me a CD called In the Aeroplane Over The Sea with the admonition, “This one’s kinda weird but I think you’ll like it.” I cued the first track “The King of Carrot Flowers.” The song starts with a simple acoustic guitar. Then the vocals come in, a male baritone sounding like calamine lotion on a fierce rash. The song tells of the dark innocence of childhood when kids played outside to avoid the emotional turmoil inside their home. The singer sang of climbing trees for sanctuary and seeing “holy rattlesnakes” slithering on the ground beneath him. Then I heard lyrics that made me pull to the side of the road.

“And your mom would stick a fork right into daddy’s shoulder/And dad would throw the garbage all across the floor.”

This was a soundtrack to my childhood. My parents fought incessantly. My mom never stabbed my dad with a kitchen utensil but she did hurl a plate that whizzed just past my dad’s head. Like the lead singer, I hid in trees for hours occasionally spotting snakes beneath me. The music was otherworldly with a wheezy accordion and hypnotic theremin. It was like the sound of a traveling circus in some Bulgarian backwater village.

Neutral Milk Hotel’s the brainchild of Jeff Mangum, a mercurial singer/songwriter from Ruston, Louisiana. His reclusive nature inspired Slate to call him “the J.D. Salinger of Indie Rock.” Mangum’s unique musical style is equal parts punk, folk, psychedelia, Eastern Choral music and romantic poetry with a penchant for lo-fi recording. At 10, he decided he wanted to be in a rock band. His school friend Robert Schneider (Apples In Stereo) was already writing guitar-based songs. The two spent hours in record stores discovering the Minutemen, John Cage, German Kraut rock and minimalist drone music. They sang harmonies together and played percussion with tin cans and broken bottles.

In high school, Mangum formed a punk band called Maggot with Will Hart (Olivia Tremor Control). After attending college at Louisiana Tech, Mangum traveled around the country recording four-track songs under the band name Milk. In 1994, he moved to Denver and helped establish the Elephant 6 Music Collective with friends who’d form bands like Beulah, Circulatory System and Of Montreal. Mangum lived in Robert Schneider’s six-by-six foot walk-in closet. The two friends wrote and recorded the first Neutral Milk Hotel album On Avery Island. Merge Records signed the band in 1996. The album sold 5000 copies and received lukewarm reviews. NME wrote: “It bores into your skull like a well-aimed power drill.”

Mangum moved to Athens, Georgia. While contemplating a new album, he read Anne Frank’s The Diary of a Young Girl. He was overcome and spent days crying about the plight of the Holocaust victim. In an interview with Puncture magazine he said, “I would go to bed every night and have dreams about having a time machine and somehow I’d have the ability to move through time and space freely and save Anne Frank.”

Mangum channeled new songs with disturbing imagery of “pianos filled with flames” and fathers “who made fetuses with flesh licking ladies.” These tracks comprised In The Aeroplane Over The Sea. The album is about a young man who comes to accept the idea that one day he’ll die. He offers tribute to Anne Frank’s spirit and celebrates her life. In the first track he sings, “Anna’s ghost all around, hear her voice as its rolling and ringing through me.” In the song “Ghost” he writes, “I know that she will live forever, she won’t ever die.”

Aeroplane was released in 1998. Merge had humble expectations and only put out 5500 CD’s and 1500 vinyl records. Initial reviews were blah. Rolling Stone gave the record 3 out of 5 stars. Robert Christgau gave it a “neither.” Over time, the music slowly gained notice. Michael Stipe was an early fan. He offered Mangum a support slot on R.E.M.’s 1998 tour but Mangum declined.

As the band toured small clubs in the South, something strange happened. Crowds knew all the lyrics and sang along with the band. Some fans were creepy. After a show in Athens, one guy presented Mangum with a sculptured gift of bubble gum and hair. A woman held Mangum’s arm for 20 minutes telling him he was a prophetic Christian channeling messages from UFO’s over Arizona.

This religious reference likely came from the lyrics of “The King of Carrot Flowers, Part Two.” During the song, Mangum plaintively wails, “I love you Jesus Christ. Jesus Christ I love you yes I do.” The tempo picks up and he croons about learning to “swim inside his mother in a garbage bin.” This wasn’t Christian pop or contemporary gospel, but primal hunger filtered through the murky subconscious of a man trying to rise above his pain and connect with God. There are chaotic trumpets, crashing cymbals, oddly-miked drums and driving distorted guitars. The sound’s visceral, a yearning for beauty and order in a discordant world.

The most joyous cut is “In The Aeroplane Over The Sea.” Mangum wrote it after falling in love with musician Laura Carter (of Elf Power). It’s an optimistic paean to life despite our ultimate mortality. Mangum urges us to “lay in the sun and count every beautiful thing we can see.” When the day of our death finally comes, life will continue in some other form and we will “meet on a cloud” and be “laughing out loud.”

“Two-Headed Boy” is the spiritual core of the album. It tells of a two-headed baby “floating in glass” like an attraction at a carnival freak show. In the darkness of night he taps on the glass yearning for freedom. When he’s finally released, strangers place “fingers through the notches in his spine” as if he were a lab rat in a science experiment. The song’s about alienation, being misunderstood in a world of callous adults. The singer urges the boy to hold on, that one day “spirals of white will softly flow over his eyelids” and he’ll be wrapped “in gold silver sleeves” as he finds freedom and new life after death. This is gothic stuff sung with an optimistic bent.

During the Aeroplane tour, Mangum’s mental health deteriorated. Friends said he suffered a nervous breakdown. Mangum told Pitchfork in 2002, “I went through a period… when a lot of the basic assumptions I held about reality started crumbling… I had this idea that if we all created our dream we could live happily ever after… yet I still saw that so many of my friends were in a lot of pain… I realized that I can’t just sing my way out of all this suffering.”

The band toured from February through November of 1998. They were so broke they often asked audience members if they could spend the night at their house. By the end of the tour, they were exhausted. Mangum told bandmates he wanted to quit. Their final performance was in London. Band members went on to create new bands like The Gerbils, A Hawk and a Hacksaw and The Music Tapes. Mangum disappeared from public view.

This period coincided with the rise of the internet. Sites like Pitchfork, AllMusic and Encyclopedia of Popular Music gave Aeroplane a 10/10 rating. Message boards spread rumors of Mangum sightings and the album slowly gained momentum. By 2005, Aeroplane sold over 140,000 copies. Mangum traveled across Europe and developed an interest in Buddhism. He recorded sound collages under the name Korena Pang. The Atlanta paper Creative Loafing wrote a cover story trying to track him down. The search ended when Mangum sent an email reading: “I’m not an idea. I am a person, who obviously wants to be left alone.” In 2001, Mangum made an unannounced solo appearance at The King’s Arms tavern in Auckland, New Zealand. A year later, Pitchfork asked him about a third Neutral Milk Hotel album. Mangum said, “I don’t know. It would be nice, but sometimes I kind of doubt it.”

In 2011, Mangum wrote the last known Neutral Milk Hotel song called “Little Birds.” The song was dedicated to University of Wyoming student Matthew Shepard, who was murdered in 1998. Mangum played the song live on several occasions. The reaction to the dark lyrics was so intense he never formally recorded the song. (Demo versions can be heard online.)

In The Aeroplane Over The Sea became an indie classic. In 2011, Rolling Stone upgraded the album rating to 4 1/2 stars and rated the album #4 on Best Albums of the 1990s. The band made a brief reunion tour in 2013 and played sporadic concerts until 2015. They’ve since gone on permanent hiatus. Mangum married filmmaker Astra Taylor in 2008 and the two currently live in New York City. He’s told friends he creates art and is “very happy.” It’s not known if he still writes music.