Some songwriters are able to give a musical form of literature. 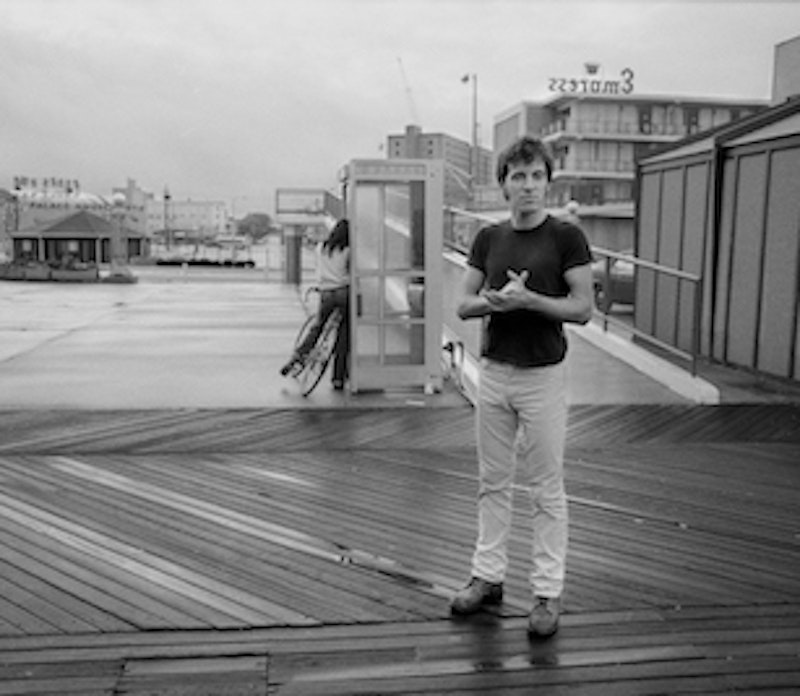 "Atlantic City," (1982), written and performed by Bruce Springsteen. The memorable first line of this song, from his Nebraska album, is, "Well they blew up the Chicken Man in Philly last night," a reference to a mob hit in Atlantic City on crime boss Phil Testa. The setting's the long-decaying New Jersey city's re-birth after the legalization of casino gambling, which attracted plenty of unsavory characters (e.g. Donald Trump). It's just Springsteen strumming his guitar and blowing on the harmonica, telling the story of a down-and-out loser ("But I got debts that no honest man could pay") who's looking for a new life in a new town. But it's the wrong town—a tawdry, crime-ridden place ("The D.A. can't get no relief") just beneath the glittery veneer. He succumbs to temptation, but his dreams are not to be. This is Springsteen at his best, chronicling the journey of a struggling working man and the bad choices and delusions he entertains along the way.

"This Night Has Opened My Eyes," (1985), The Smiths. This line sums up the story, which Morrissey said he got from the 1958 play, A Taste of Honey: "The dream has gone but the baby is real.” Unplanned parenthood has led a woman to do the wrong thing: "Wrap her up in the News Of The World, dump her on a doorstep, girl." Love has faded, and neither parent is willing to keep the child, which gets dropped off, perhaps at an orphanage. The lyrics, reflective of the situation, are ambivalent, with Morrissey singing both "You did a bad thing" and "You did a good thing," and "I'm not happy and I'm not sad." The song's brought together by Johnny Marr’s brilliant, subtle guitar work. This isn't the very best song from The Smiths, but if it's the first one you hear by them, you'll listen to others.

“Amarillo By Morning,” (1982), by Terry Stafford and Paul Fraser, as performed by George Strait. Strait had a hit with this one (his best song), a melodic, contemplative tale of a downtrodden rodeo rider who's seen hard times, but is consoled by the fact he's still got something others would like to have (“I ain't rich but Lord I’m free”). It's a pretty, bittersweet tune hitting plenty of country music touchstones, including heartbreak, being broke and lonely, and the freedom of the open road. The song's about a man remembering a bitter past who's resigned to his fate, which he knows won't be easy, but he's not going to let it get him down.

"Moonshiner," (1963), arranged by Bob Dylan (adapted from an old folk song), performed by Bob Dylan. Dylan sings at his starkest in telling the haunting story of a man whose life revolves around alcohol ("The whole world is a bottle"). The lyrics are straightforward. By day, the narrator sets up his still in "some hollow," and by night drinks at a bar, unable to get the women whose "breath is as sweet as the dew on the vine." Liquor's his mistress. If someone tells you Dylan can't sing, play this one. It's one of his greatest vocal performances. Honorable mentions to Uncle Tupelo and Cat Powers for their fine renditions of this song.

"Harper Valley PTA," (1968), Jeannie C. Riley (1968), written by Tom T. Hall, performed by Jeannie C. Riley. This snarling revenge song's the musical equivalent of Sinclair Lewis's Babbitt and Elmer Gantry in the way it skewers hypocrisy. It's the story of a badass divorcée who the local PTA slut-shamed with a letter, as narrated by her daughter. "Mrs. Johnson" then marches down to a PTA meeting in her scandalous miniskirt and kicks some ass with a fusillade of truth bombs.

"Bobby Taylor's asked me for a date seven times," and Bobby's wife boozes while he's out of town too. Mr. Baker's secretary had to leave town mysteriously. And so on. "The day my momma socked it to the Harper Valley PTA," sings Riley. This is country music that even Hillary Clinton, who famously doesn't like "Stand By Your Man," could get behind. There's no more feminist song in the Country & Western canon, and few as fun to listen to.

"It Was A Very Good Year, (1966), written by Ervin Drake, performed by Frank Sinatra. This beautiful song's told by an old man—"I'm in the autumn of my years"—looking back with sweet nostalgia on the romances he's had in various stages of his life, starting when he was 17. By the time he was 21, he'd graduated from small town girls to city girls, with their "perfumed hair that came undone." Note how much you can suggest with an understated turn of phrase that recognizes you don't need to have everything spelled out.

At 35, "It was a very good year for blue-blooded girls of independent means. We'd ride in limousines." I got turned onto this song by Richie Havens' fine version of it, but now prefer Sinatra's interpretation, because of the way he inhabits the song.

"Famous Blue Raincoat," (1971), written and performed by Leonard Cohen. This quiet, enigmatic song, accompanied almost exclusively by Ron Cornelius' spare guitar, is delivered in the form of a conflicted letter. Cohen once said that he wrote this impressionistic exploration of a complex, painful memory for two people—for a man he refers to as "my brother, my killer," and for the woman (Jane) that he had to share with that man.

It sounds like an attempt to resolve the narrator's bitterness, anger and sadness over the situation, although he still retains some weary affection for his "brother"—"I guess that I miss you, I guess I forgive you. I'm glad you stood in my way." There's a lot to decipher here. Cohen said that he was unsatisfied with the way he told this story, so just enjoy the mystery.

"Copperhead Road," (1988), written and performed by Steve Earle. Outlaw country rocker Earle takes on the persona of Tennessee country boy and Vietnam vet, John Lee Pettimore, whose grandfather was a moonshiner and father used to "run whiskey in a big block Dodge."

John Lee III came back from Vietnam with an updated plan, however. He was going to be a marijuana grower, planting it "up the holler down Copperhead Road." The DEA's "got a chopper up in the air,” but the narrator's "learned a thing or two from Charlie don't you know. You better stay away from Copperhead Road." This is such an aggressive, swaggering song that you know John Lee's not playing around.

"Come Dancing," (1982), written by Ray Davies, performed by the Kinks. The quaint, music hall sound may have you dismissing this one at first, but stick with it because, although it doesn't rock like The Kinks did in their earlier music, it's a humorous depiction of an England that faded away long ago. Right down Ray Davies' alley.

The story's about the narrator's sister, who loves to go dancing at the "pally" with various dates who'd spend all their money on her, but had to settle for a low return on investment—“a mere cuddle and a peck on the cheek"—at the end of the evening. Mom would sit up and wait for her to get home in time for the midnight curfew. Listening to this song's like watching an old movie.

"Ray & Me," (2004), written and performed by Glenn Tilbrook. Tilbrook, half of the creative team from Squeeze, produced a little-known gem with this fond reminiscence of a friendship between two boys, presumably somewhere in post-WWII England. The story's similar in some ways to the one in "Come Dancing" -- same time period, country, and theme of childhood memories as an adult.

Many will be reminded of their youth by lines like, "We'd play around on the bombsite at the bottom of our street... We'd stay as late as we could, till we were hungry." Except for the bombsite part, that's exactly what I used to do. Here's another: "His brother would lose his mind if we touched his records or found his magazines." I remember that too. The song slips into bittersweet territory when "the council buys Ray's family house,” and they slowly stop seeing each other altogether. Progress comes with the inevitable emotional toll.