Sven-Erik Geddes' Planet Pimp, garage rock ubiquity, and the ouroboros of its influences and its relative success in the 1990's. 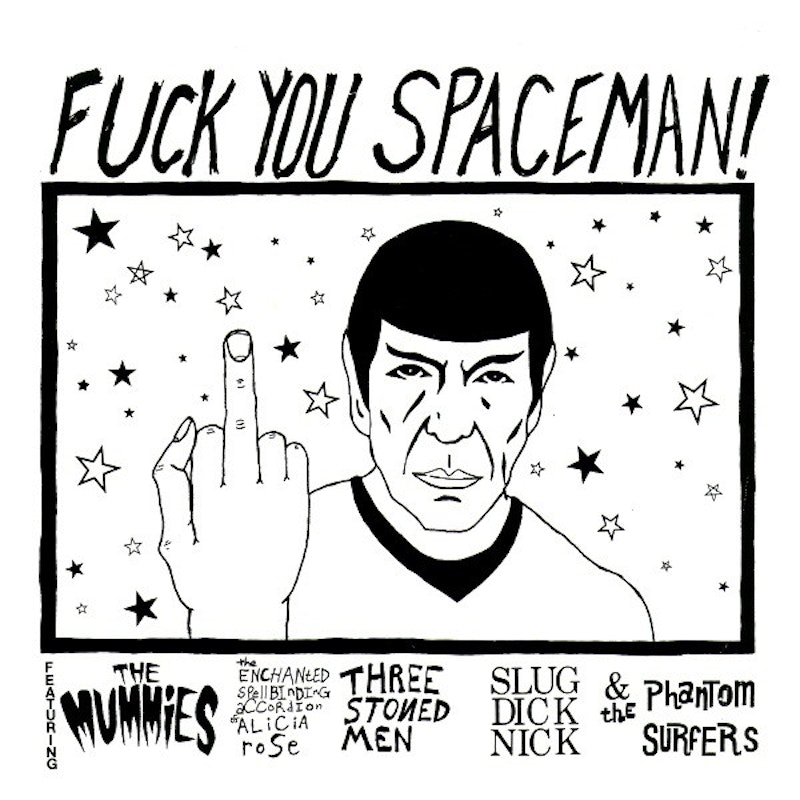 The garage bands of the 1960s were regularly featured on network television, a.m. radio, and in mainstream films. They were often British-influenced one-hit-wonders who recorded for major labels. The mod clothes they wore were sold at Sears, Montgomery Ward, and other chain stores. Country, blues, rockabilly, and other vintage American music forms were created by people from marginalized socio-economic backgrounds. Unlike these folk-based pop genres, a love for primal melody is the only factor unifying the disciples of garage rock. The culture that sprang from 60s garage was designed to be easily marketable, so its resurgence coincided perfectly with the rise of hyper-materialism in the 1980s. As the garage revival dragged on into the 90s the fad came full circle toward the later part of the decade when The White Stripes, Billy Childish, and The Mummies began to pack rock clubs all over the world, giving comfort to bored consumers hooked on nostalgia.

When garage rock returned to its shameless commercial roots, few artists created any significant work. One of the few who did was Sven-Erik Geddes, proprietor of the San Francisco record label Planet Pimp. Most 90s indie labels had a reverence for rock's post-modern aesthetics. Unlike the musically focused minds helming Matador, Sub Pop, Merge, and similar imprints, Geddes assumed the role of curator-as-artist acting as a mad puppeteer manipulating the sound, visual art, music, and context of the Planet Pimp releases, all of which came out from 1992 to 1998. In many ways the label served as a hilarious affront to the entertainment industry, consumer culture, and the garage rock revival.

Thanks to alt-rock's mass-market success in the 90s, garage rock and all loud guitar music genres became as mundane as an extra-large box of Twinkies at Sam's Club. The imagery used for Planet Pimp's derivative garage releases featured dynamic layouts of clip art akin to the late-20th century commercial designs that adorned junk food and other mass-produced doodads. There were Planet Pimp releases by The Go-Nuts, a performance art project described as "The World's Greatest Snak Rock and Gorilla Entertainment Revue." The Go-Nuts dressed like cartoonish superheroes and starred in a raucous live show with their invention "The snak cannon." The self-explanatory function of this device is the perfect embodiment of Planet Pimp's Rabelaisian take on consumerism.

Pornography, television, Mad-style satire, and anything vulgar informed much of the Planet Pimp output. Along with excellent 45's by the Japanese bands The Pebbles and The 5.6.7.8.'s, musically the best releases on Planet Pimp were its Star Trek tributes: the Fuck You Space Man! compilation from 1992 and the 1998 LP by The Shatners. These two records contain some of Planet Pimp's most primal cuts of instrumental rock and lo-fi punk interspersed with spacey electronic noise, funny sci-fi lyrics, and odd cover photos of band members dressed in Star Trek-inspired outfits. Fuck You Space Man!'s record cover was partially drenched in off-color comic strip parodies that have nothing to with sci-fi. These strips are so consciously idiotic and amoral it's a miracle that today's "social justice warriors" haven't already crucified Geddes.

The records Planet Pimp released for popular garage revival acts vandalized the genre's iconography. The label's live Mummies record had cover art dominated by a grainy photo of topless women posing awkwardly in front of the band's trademark hearse; the record itself features The Mummies tussling with an unruly audience who try to grab the group's instruments in the middle of a song. The Planet Pimp release by garage rock super group The Lone Surfer & His Super Pals documents a gig where the quartet was confronted by a heckler so persistently obnoxious that they invite him on stage and then paid him to leave. The exchange leaves barely enough disc space for an incomplete version of the surf warhorse "Church Key." Fuck Surf Music was the title of the label's Phantom Surfers seven-inch; its flipside was a comedy skit that simulated a prank call to Dick Dale (a stunt that almost incurred legal action from The King Of The Surf Guitar).

Geddes' love/hate affair with commercial excess reached its apotheosis when Planet Pimp released field recordings by The Golding Institute. Golding wasn’t a school, think tank, or research firm. It was merely another alter ego of twisted anti-comedian Gregg Turkington, better known as Neil Hamburger. The Golding Institute had three Planet Pimp seven inches:  Sounds Of The American Fast Food Restaurants, The Sounds Of San Francisco Adult Book Stores, and The Sounds Of International Airport Rest Rooms. There's no ironic punchline or sophisticated sound art project connected to these releases. Other than a smattering of tongue-in-cheek National Geographic-style narration by Turkington and voice-over artist Ryan Kerr, these EPs present consumer culture with the chance to marvel at its own soul-crushing mundanity. With the grandeur of a snake eating its own tail, these items caused such a buzz when they came out that they got coverage in checkout line favorite Entertainment Weekly. The Golding Institute discs were some of Planet Pimp's final releases.

What happens after you immortalize the sound of weary travelers defecating? There's no easy answer, which is probably why financial difficulties caused Planet Pimp Records to dissolve in the late- 90s. Soon after working with the label, Gregg Turkington/Neil Hamburger became famous in the indie comedy scene. He's racked up an impressive list of film and television credits and is considered by some to be one of today's most influential comedians.