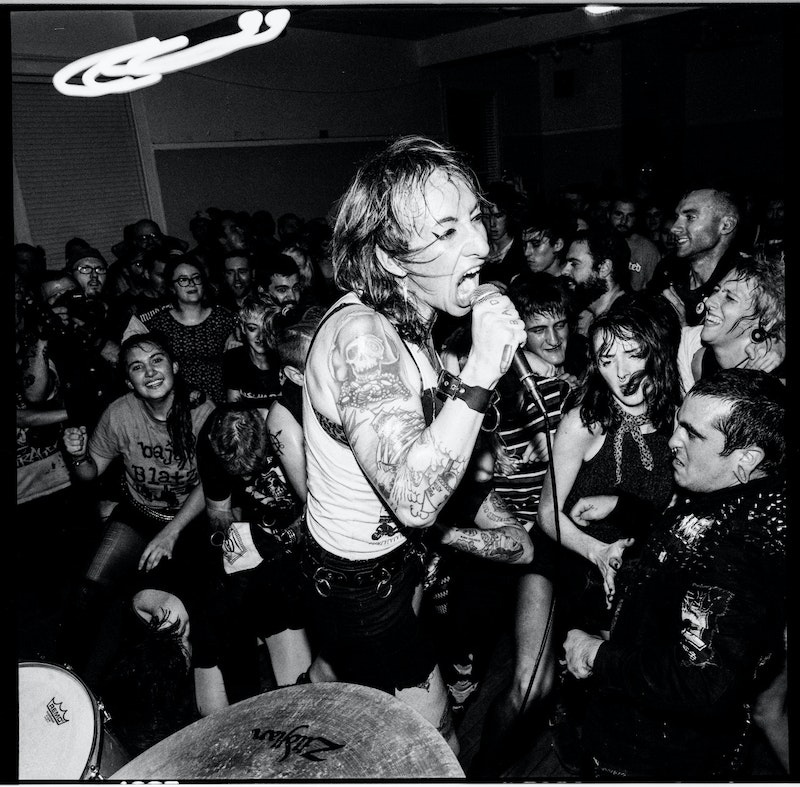 While the rest of LGBTQ media has dissected Taylor Swift’s supposedly pro-LGBTQ video “You Need to Calm Down,” I’ve re-listened to G.L.O.S.S., a band that can best be described as Minor Threat if Ian MacKaye was a trans woman. Led by Sadie Switchblade, the five-piece Olympia band gave space in the punk scene for queer and trans folks to vent their frustrations and heal from their traumas in unison. Laura Jane Grace of Against Me! already brought trans representation in punk rock, but G.L.O.S.S. didn’t just tell trans punks it was okay to be themselves—they demanded justice with lined lips and spiked bats. The band broke up after releasing just two EPs—16 minutes of music total—but those minutes gave queer and trans kids a better soundtrack than anything Swift can squeeze out of a drum machine.

Their 2015 demo EP begins by perfectly describing what it’s like to be a trans person assigned male at birth (AMAB):

They told us we were girls

How we talk, dress, look, and cry

They told us we were girls

So we claimed our female lives

Now they tell us we’re not girls

When I was a “boy,” kids said I wasn’t man enough, but now that I’m out as trans, people say I’m just a man in a dress. But that doesn’t matter because according to G.L.O.S.S. the future belongs to us outcasts, to whom they dedicate “Outcast Stop.” “The freaks are coming,” Switchblade warns to society.

Switchblade told Bust that G.L.O.S.S.’s demo is a personal record of her experiences as a trans woman. In the songs “Masculine Artifice” and “Lined Lips and Spiked Bats,” she recounts how society demanded she not only be a man, but also keep quiet and have a normal boring desk job. In “Targets of Men,” she confronts men harassing her on the street with the self-determination I wish I had:

This makeup is for my eyes

These fishnets are for my thighs

This walk is how I got through life

You want the pepper spray first or the pocket knife?

G.L.O.S.S.’s 2016 EP Trans Day of Revenge kept the personal, but expanded the subject matter to include broader political issues. They also get more radical; the EP opens with the declaration, “When peace is just another word for death, it’s our turn to give violence a chance.” The demo first warned America that the freaks were coming, but with this EP Switchblade spelled out who the freaks were coming for: racist cops, white nationalists, men who violently attack women, and men who murder black trans women. G.L.O.S.S. made it clear what side they were on in the Nazi punching debate even before Richard Spencer got slugged on live TV.

Racist cops and Nazis aren’t G.L.O.S.S.’ only targets. In the title track, Switchblade attacks the Human Rights Campaign’s lack of support: “HRC, selfish fucks/yuppie gays threw us under the bus.” She’s not wrong because the HRC has a history of being either antagonistic or apathetic about trans rights, including silence about Rep. Barney Frank excluding trans protections in ENDA. The HRC has gotten better at trans issues, but we still give them the side eye and wait for them to prove themselves.

G.L.O.S.S. broke up right when they were getting mainstream recognition. Epitaph Records offered G.L.O.S.S. a $50,00 record deal, and the band thought about splitting the proceeds with Black Lives Matter, but they turned it down because they wanted complete independence. The growing mainstream recognition was starting to take its toll on the band; Switchblade’s last public tweet was about how Twitter was giving her anxiety. Eventually G.L.O.S.S. publicly announced they were splitting up due to health reasons. “We are not all high-functioning people,” they wrote, “and operating at this level of visibility often feels like too much.”

Switchblade still makes music under the name Dyke Drama, which is less hardcore and more personal than G.L.O.S.S.—her most recent EP Hard New Pills is about struggles with substance abuse—but is still great music. I miss G.L.O.S.S., though, but maybe like Nick Drake they said everything they needed to say with just two EPs.