How do you keep anger and punk drive going after decades have passed? 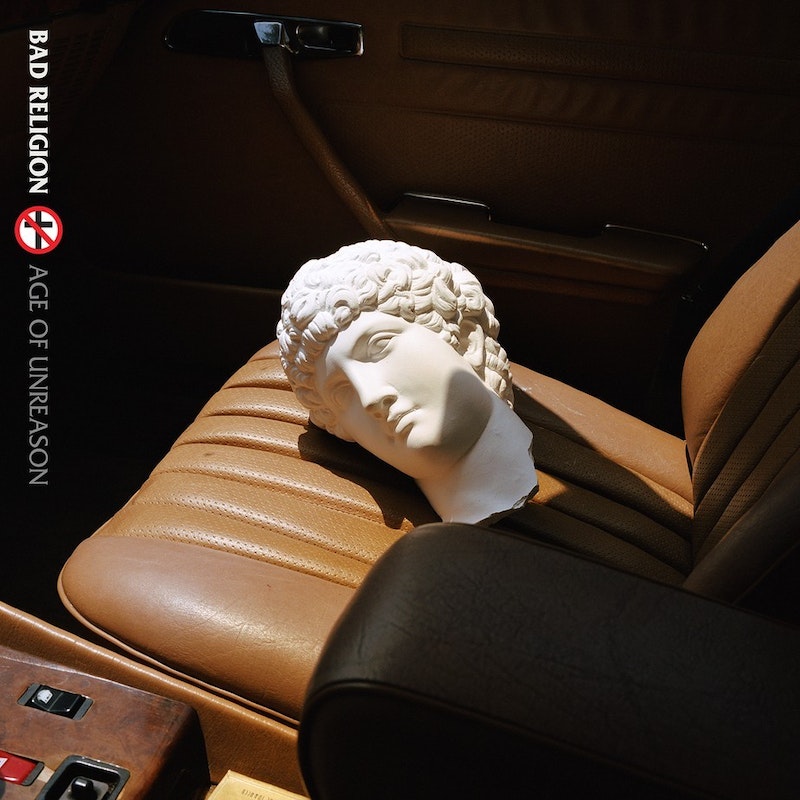 Punk rock used to be synonymous with youthful anger. That was long ago, and now we’re at the point where survivors from punk’s early days are becoming senior citizens. How do you keep anger and punk drive going after decades have passed?

I suppose one way to start is forcing yourself pay attention to the world around you. Thus Age of Unreason, the new album by Bad Religion, their first in a half-dozen years. Founded in Los Angeles in 1980, one of the crucial bands in the development of melodic hardcore, Bad Religion’s songwriting blends aggressive yet surprisingly intricate punk anthems with intelligent and politically aware lyrics. The new album’s a solid entry in their catalogue, a literate dissection of the undercurrents of insanity in the public life of the present day; an album about the Trump era that doesn’t talk about Trump specifically but about the mindset that raises up a Trump.

Age of Unreason fits 14 songs into 33 minutes. Only one song, the closer “What Tomorrow Brings,” breaks the three-minute barrier. But for the most part this isn’t an exercise in speed. Even a song like “Faces of Grief,” built around sheer velocity for most of its 65-second length, finds different sounds among its warp-speed riffs and gang shouts. Overall the more you listen to the album the richer it becomes, touching at various spots on classic rock, the kind of country folk found on singer Greg Graffin’s solo work, and old-fashioned pop.

The lyrics shine the most. The title of the album’s justified by the songs, which touch on the challenge rationality faces from paranoia and populism. In a statement publicising the album, guitarist Brett Gurewitz said, “The band has always stood for enlightenment values… Today, these values of truth, freedom, equality, tolerance, and science, are in real danger. This record is our response.” That’s a fair assessment of the lyrical themes that run through the songs.

Look at the song titles: “Chaos From Within” (about the border wall and the true source of chaos, among other things), “Do the Paranoid Style” (updating for the Trump era Richard Hofstadter’s essay “The Paranoid Style in American Politics” originally written in response to Barry Goldwater), “Lose Your Head” (oddly rueful, with its cry “maybe we'd all benefit from some epistemic humility”), and especially the title track.

Bad Religion is perhaps the last band that would idealize the past. “Old Regime” directly compares the aristocracy of pre-revolutionary France to modern elites. But there’s something in Enlightenment ideals, a turning-away from revolutions and apocalypses, that in the current era is not just radical but even subversive. Age of Unreason is not a cry to man the barricades. It’s a cry to be suspicious of those calling you to the barricades.

This isn’t a reach for the band. Always ambitious musically—their second album, Into the Unknown, was a disc of synth-oriented quasi-prog—they’ve always written about politics as a way to write about ideas and philosophy. They’re the sort of band that has an online store where, besides CDs, t-shirts and hoodies, you can buy a paperback copy of the lead singer’s PhD dissertation. And the sort of band that (in 1991) released a single whose B-side was an eight-minute spoken-word critique of the Gulf War by Noam Chomsky.

Age of Unreason fits nicely with their recent work, even if it has been six years since they released their last album, True North. Graffin’s vocals are less angry, perhaps, but if so then they’re conversely more bitter and ironic. Vocal harmonies, a trademark of the band, are as effective as ever. Brett Gurewitz and Brian Bentley have grown more inventive as guitarists; consider the chiming sounds of “Don’t Leave Your Head.”

The album holds up next to their classic work. There may not be a single song that stands out the way “American Jesus” leaps off of 1993's Recipe For Hate or “21st Century (Digital Boy)” from 1990's Against The Grain, but song for song Age of Unreason is as good as any album the band’s made.

The album’s sequenced well, highlighting the different approaches and tones of the songs. You can hear it in the way the deceivingly sunny tones of “The Candidate” segue into the supercharged paranoia of “Faces of Grief.” Or the despairing chorus that ends “Big Black Dog” and gives way to the claps and echoing guitars of “Downfall.”

It’s not perfect. The richness could’ve been brought out better by the production, which is flat and lacking in range. Drummer Jamie Miller makes his first appearance on an album for Bad Religion, and while there’s nothing wrong with what he does, over the course of the album more variety from him would’ve been nice. Then again, some of that is made up for by what Jay Bentley’s bass brings to the rhythm section.

It’s difficult to grow old with integrity, and not just for punks. Age of Unreason is an album about rationality with emotionally powerful songwriting. It’s an album that few bands could make. In the youth-oriented world of rock music, late-career albums often get overlooked; this one deserves better.