Vampire Weekend is Torturing Me

“This Life” is devouring my consciousness, and I’m in hell. 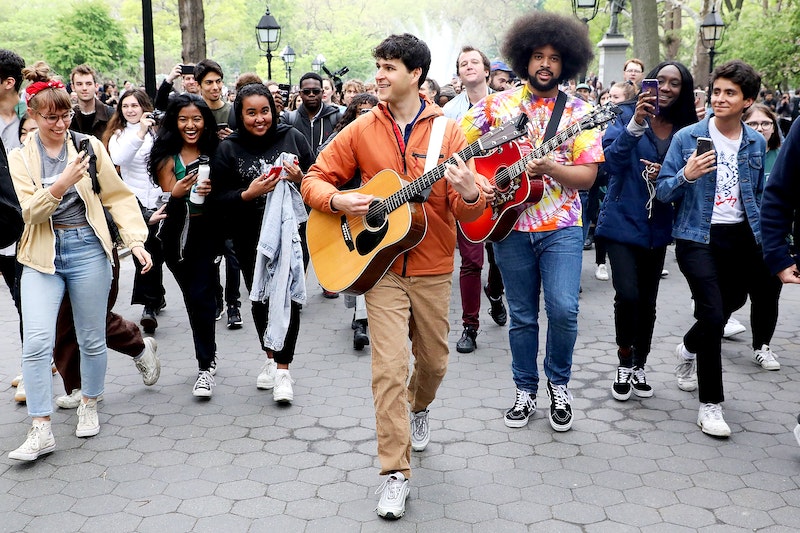 Why the worst band of all time chose to include subtitles in the worst music video for the worst song ever written is beyond me. Perhaps they feared their lyrical skills would be misinterpreted. Maybe it’s the world’s most subtle troll. Maybe they wanted to make my job easier. Maybe they were taunting me.

I don't know why this band did this, flexing their sophomoric vocabulary, but they did. And I read them all word by word, multiple times. In fact I listened to the song all night long. I couldn't stop. I had weekend fever. The next morning I was awoken by the song—I set it as my alarm clock ringtone. I streamed it over and over during the entirety of my commute. While at work, I couldn't get the annoying melodies, off-putting grooves, and thin, whiny vocals out of my head. The moment my shift ended, I ran to my car and blasted the song through the stereo speakers in the employee parking lot. When that first guitar twang hit and those horrible hands began to clap, I was taken with relief. It was like a drug.

“This Life” by Vampire Weekend was devouring my consciousness.

Is as natural as the rain

I just thought it didn't rain

I'm not kidding—that's really how the song opens up. This line is so cheesy I'm not surprised it’s never been sung before. Even Mac Demarco would cringe. Vampire Weekend frontman Ezra Koenig continues to tell to us all the things he knows about love and dreams, boasting his knowledge on subjects that his “baby” apparently knows nothing about. Suddenly Vampire Weekend has become experts on the subjects of love, dreams, hate, and pain. The Ivy League indie group has all the answers if only you march in their parade of rain and mundanity.

The philosopher strikes again, raising an evergreen question. Some pretty guitar filler bridge the parts together and are followed by twangy noodling until the chorus where the song picks up. The narrator reveals that his “baby” has been cheating on him. And if that wasn't enough—the next line reveals that he’s also been cheating on his “baby.” Now I was hooked. It was Dr. Phil, it was Jerry Springer. I took on the role of a marriage counselor, guiding these two old-fashioned lovebirds into the 21st century where open relationships are more common than vegan Big Macs. And not only has the narrator been cheating on his “baby,” he’s cheating through this life, Koenig explains.

He doesn't need the savior to answer that question. Another verse of Philosophy 101 is sung, then the bridge where an annoying treble boost in the mix takes hold of a background female vocalist, perhaps to invoke a dream. One can assume that she's intended to be the narrator's subconscious speaking to him from the perspective of his long lost “baby.” She graciously reminds the listener that they've been cheating on each other, in case we've forgotten. The song ends just as it begins—in a polyrhythmic clambering of headache-inducing mediocrity.

Maybe the Vampire Weekenders are sweet people. I'm sure their souls are kind and intentions good. They aren't setting out to destroy us. They just want to have fun and write some surf tunes for head-bopping. I get that. And who am I? Just some resentful idiot music writer, hiding behind his words, bashing a band. What’s my role in this? To rag on a successful band that I think is trash? I've become everything I hated: John Cusack in High Fidelity.

I hope someone reads this review, disagrees with me, and buys their new record Father of the Bride. That’s my goal. I dislike the music, but I don't want to spread negativity for negativity's sake. I don't want to sound like a smug asshole. I'm no Ryley Walker.

So to compensate for this negative review, I'm making it my lifelong mission to recommend this song to every single person I know. Every single moment of every waking day will be devoted to this newfound mission. I won’t rest until “This Life” by Vampire Weekend has reached every set of ears in the world. I've listened to the song nearly 1000 times at this point. I probably know it better than Vampire Weekend know it themselves.