Fear of Women in Rock 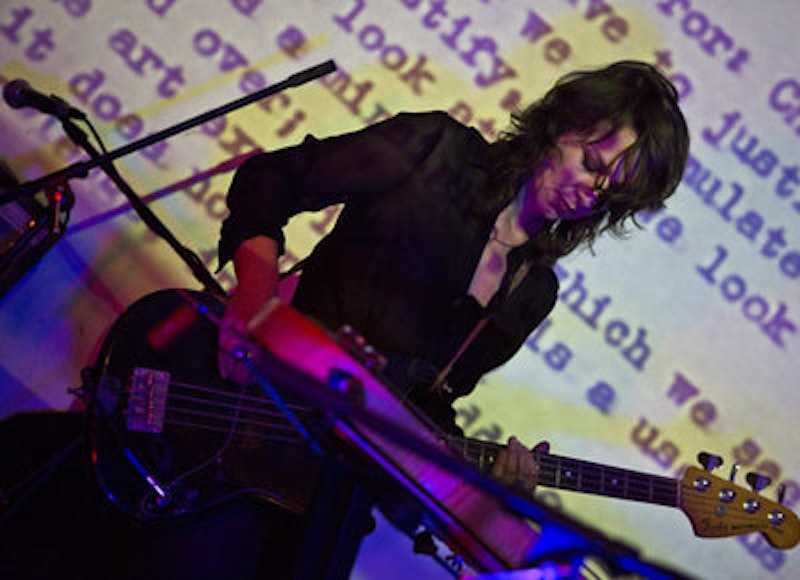 Rock is still stereotypically a guy thing. Shaggy, grimacing, manly men sling their guitars low and bang their heads to the guitar solo. Whether it's cock-rockers like Aerosmith or the more sensitive indie-geniuses of today, being a rocker often means being a bad man glowering.

The great thing about the female indie band Novella is that they fit neatly into that rock tradition of virtuoso swagger at the same time as they don't. Their new album Land has some of the dissonant burr of Sonic Youth, but the harmonies and the cheerful hook sound like they come from the British Invasion, by way of the Bangles. It's exhilarating polished pop. "Something Must Change" opens with a detuned killer classic rock guitar assault and moves right into chiming, head together harmony chorus. "Two Ships" is in the twanging tradition of the Byrds or REM, with more feedback fuzz and a bit in the middle where it sounds like the song is going to come apart, but doesn't quite. It's a feminine take on rawk, but it’s grounded in pop-rock past in a way that makes you realize that women, and femininity, have always been part of the rock ethos. The ballad "Younger Than Yesterday" is starry-eyed Beatles psychedelia with "ooo-ooo-ooohs" as a reminder of how much the Beatles loved girl-group Motown. Listening to Novella, you realize women were, and were always supposed to be, the ones making rock in the first place.

Dana Schechter is best known for her indie band Bee + Flower, a group that shares some dreamy pop ground with Novella. But her latest band Insect Ark (with Ashley Spungin on drums for live appearances and Schechter playing everything else) is something else again. Where Novella is about revealing rock's feminine soul, Insect Ark is about turning rock into a buzzing genderless monolith. Part doom metal, part black metal, part arty electronica, Portal/Well, is all heavy, slogging beats and whining, tortured feedback—music by which to howl in despair. The album is aggressively anonymous; there are no vocals and the slow electronic scritching of "Octavia" (possibly a tribute to sci-fi writer Octavia Butler) seems to suggest stunned beatles crawling across corpses, rather than any human protagonist. Black Sabbath's tortured, abject tradition is pushed to a blank extreme; women, as it turns out, are better at embodying sexless force than all those men of extreme metal haplessly aspiring to be genderless corpses.

That's the message of Boston-based Sewer Goddess' awesome 2015 EP Painlust as well. Like Insect Ark, Sewer Goddess is borderline metal, a construct of painful buzzing drones and bleak echoes. Painlust is more industrial than Portal/Well though; you feel like you're wandering through demonic mills rather than blasted fields. And, perhaps even more importantly, frontwoman Kristen Rose sings—or, more accurately, screams like she's being strangled by feral rabid witches, and/or like she's a feral rabid witch coming to strangle you.

If Novella makes femininity part of rock history, and Insect Ark erases gender altogether, Sewer Goddess is the howling female that rock has told itself it's excluding, the fanged goddess banging and banging and banging on the door as the wee little rock bands and their sad trembling riffs huddle together. "Malenasmask" —which has "male" twisted up right in the title—has some of the most truly impressive screaming I've ever heard on record. Sewer Goddess is "music" for rape-revenge and castration-by-claw; Painlust dances gleefully in rock's dismembered corpse. If rock is going to be stereotypically male, then, Sewer Goddess hisses, the scariest, most evil music is going to come from women—which means that the most scary, wrong, evil, and baddest rock isn't going to be made by men.