A Day at the GWAR-B-Q

I'm glad to live in a world where GWAR exists. 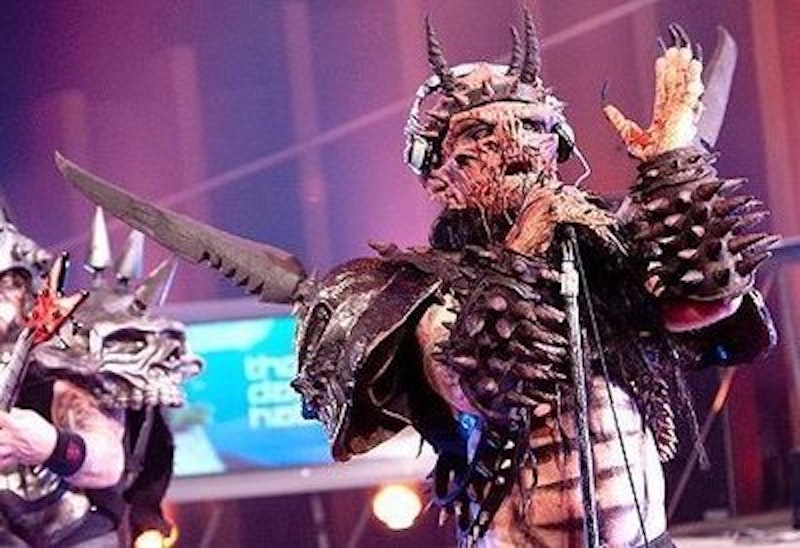 Saturday, August 15th will forever be memorable for me, since it’s the sweatiest I’ve ever in my life.

I spent the better portion of that day volunteering at the GWAR-B-Q, an annual music festival in Richmond, VA where the great unwashed fill Hadad's Lake with sweat, beer, and fake blood as a variety of punk and metal bands (headlined by GWAR, of course) play on three stages. It's a mix between the Maryland State Fair and the Chronicles of Gor, and it was immensely fun.

My job was to wear a weird/gross costume as part of the Q's Crypt of Chaos, a GWAR-themed haunted house where their sun-blind, day-drunk fans could interact directly with some of GWAR's most notable characters, including Nazi Pope, Hellcop, and Mutavore. This opportunity came about because someone in the GWAR camp was made aware of the Baltimore Rock Opera Society (or BROS), of which I’m a proud member, and reached out to us for volunteers. I jumped on this opportunity, and for good reason; it's not every day that GWAR asks me to dress like a freak and troll complete strangers.

I don't know what the crossover audience is between Splice readers and GWAR fans, but for those in the dark, GWAR is a ridiculous heavy metal band known for performing in grotesquely elaborate rubber/foam/latex costumes. The band portrays itself as a troupe of intergalactic barbarians who were banished to Earth, where they are constantly attacked by their many enemies (aka the band members' friends, also dressed in weird costumes), including cyborgs, dinosaurs, and hideous giants. Their live shows are glorious celebrations of commedia dell'arte, Jacobean theatre, and Paris' legendary Grand Guignol, full of gory monster battles that spray the audience with gallons of fake blood, intestinal gunk, semen, and other bodily fluids. When they're feeling especially puckish, the band mutilates effigies of celebrities, political/historical figures, and social archetypes on stage as well.

The band itself is in an interesting position, since their original lead singer died last year, and their decision to continue on with new vocalists (one of whom gave a TED Talk, believe it or not) has met with some criticism. The idea that the band is not a fixed entity as much as a continuing mythology with a revolving cast of characters is ultimately what keeps them going.

The same can be said for Slave Pit Inc., the Richmond-based arts collective and effects studio created specifically for GWAR. They make every costume, puppet, and blood-squirting prop in the band's arsenal, book their tours, produce their movies, and release their albums. They've been dedicated to this absurdity since the mid-1980s, and hit their 30th anniversary not long ago.

Don't let any of this reverence give you the idea that I'm a longtime GWAR fan, though. I wish that I was, and definitely knew about them as a teenager, but they were only a peripheral interest until a couple of years ago. Feeling the need to do some research before I showed up to their party, I listened to a lot of GWAR, if only to increase the odds that I heard something familiar when I saw them live. Not recognizing anything in a band's live set is awkward enough without being surrounded by thousands of diehards who know exactly when to fist-pump.

After a week of familiarizing myself with GWAR, I drove down to Richmond and met up with fellow volunteers at the GWAR-B-Q site for a staff meeting the day before the event. We were a mix of haunted house/Renn Faire veterans, official (meaning paid) crew members, and union stagehands, some of whom had been there all week, trying their best to not die in the oppressive mid-August heat as they got the place ready. After getting a tour of the mostly-built Crypt, which was an un-ventilated, one-story structure with four or five main rooms connected by one continuous hallway, we tried on costumes and figured out who would be stationed where during the Q itself.

Sadly, I was too stout for any of the GWAR costumes, but I'd already brought one of my BROS outfits with me, so I was cleared to wear that instead.

Between that on-site meeting and a second one at the hotel where many of the out-of-towners were staying, I got to know the other volunteers, and found myself liking all of them. GWAR fans are a friendly bunch, and the same can be said for performers on the seasonal outdoor event circuit. Short of working for an actual traveling carnival, this is the closest one can get to being a legitimate carny in 2015 and exercise one's nerdy/artistic/theatrical tendencies.

We all had to be on-site by six a.m. The Q itself didn't start until 10, but the purpose of that early arrival time was to give us a few hours to eat, caffeinate, and get into costume. I also took a moment to remember that I'd never performed in a haunted house before and had no idea how to scare people. The other volunteers were under the impression that I was a seasoned performer, which kind of made matters worse, so I was a little nervous about being an underwhelming haunt attraction when the Q began and we were called to places.

As it turned out, my fears were unfounded. For one thing, it was too hot for emotions of any kind. Along with no air conditioning, the Crypt was built with black, Vacuformed walls, so it was less of a haunted house and more of a haunted convection oven. Part of my costume was an Egyptian-patterned spandex body suit that doesn't breathe especially well, so if I was worrying about anything, it was the very real possibility that I would dehydrate into a corn husk doll in there.

And I wasn't even in a proper GWAR costume; those are all foam and rubber and meant to be worn for about 30 seconds at a time, not the better part of a day in swamp-ass Virginia. How any of those poor volunteers survived, I'll never know.

Also, this wasn't a typical haunted house experience. The people who came through were more excited about seeing GWAR characters up close and being sprayed with fake blood than anything else, so it was really more about messing with them. Many of the Crypt visitors had been drinking since the previous afternoon, so eliciting any genuine fear from them would’ve been impossible. Instead, I made tasteless-but-corny jokes in a Macho Man Randy Savage voice for about six hours straight and had a grand old time.

GWAR fans, known colloquially as “bohabs,” are incredibly welcoming; they're that refreshing kind of nerd who's just happy to find other people with similar interests. Make no mistake: GWAR is very much a nerd thing, which I don't mean as an insult. GWAR's whole mythology is a scatological exaggeration of comic book and pulp science fiction/fantasy tropes. Likewise, their creative output and merchandising acumen have attracted and nurtured a niche fanbase whose enthusiasm and loyalty border on obsession.

When deceased GWAR vocalist Oderus Urungus' costume and armor were given a Viking funeral at the 2014 GWAR-B-Q, fans were swimming into a burning ship to try and grab pieces of it for their collections. That's getting close to Twilight levels of insane. It's also the kind of long-term devotion and investment in something, whether it's comics or video games or bands that write songs called “Babyraper,” that really defines being a nerd.

I got a much better understanding of their attachment to GWAR when I saw the band perform two hours after the Crypt closed up for the day. I was still wearing most of my costume, minus the mask and hat, and an old Ramones t-shirt that I didn't mind ruining; I'd been warned not to wear any clothes I actually cared about.

GWAR put on an amazing live show that was almost a play, and I was close enough to the front of the stage to get absolutely soaked with blood from the performers on stage. I'll add that a lot of GWAR's songs are pretty catchy on their own. Unlike a lot of other metal bands, GWAR's albums got better and more interesting as time passed, and they played a decent spread of older and newer material that showed off how they've evolved musically over the years. That said, the adage that you haven't really heard GWAR until you've seen them live certainly held true.

The crowd, while energetic and aggressive, was also mindful in a few surprising ways. Even with so many people there, anyone who got knocked off balance by moshers was immediately picked back up, and newcomers to GWAR like myself were pushed right up front so we wouldn't get robbed of the full experience. “I'm having a great time and I want you to have a great time” was the prevailing attitude.

I saw a few other impressive bands that afternoon—Clutch, Down, the Descendents—but GWAR was something else entirely. They're a complete package unlike any other band or touring enterprise in the United States, and you owe it to yourself to see them at least once.

This may sound crazy, but creative people in this country owe GWAR some gratitude, in the same way they owe John Waters. Even if you don't like what they do or how they do it, they've been holding the door open for outsider/“low” artists for decades, and proving that you don't have to box yourself into mainstream tastes to find success. If you're willing to commit, work hard, and not quit in the face of rejection, you can build a life around celebrating your weirdness instead of hiding from/apologizing for it.

They give me hope. If GWAR can find an audience that appreciates what they're doing, then maybe there's an audience out there for my work, too. As I left the Q that evening, bloody and sweaty with fiery aches in all my joints, I found myself glad to live in a world where GWAR exists.