One Direction and the Great Mid-Life Crisis Album

The mid-life crisis record used to be a staple of rock ‘n’ roll. 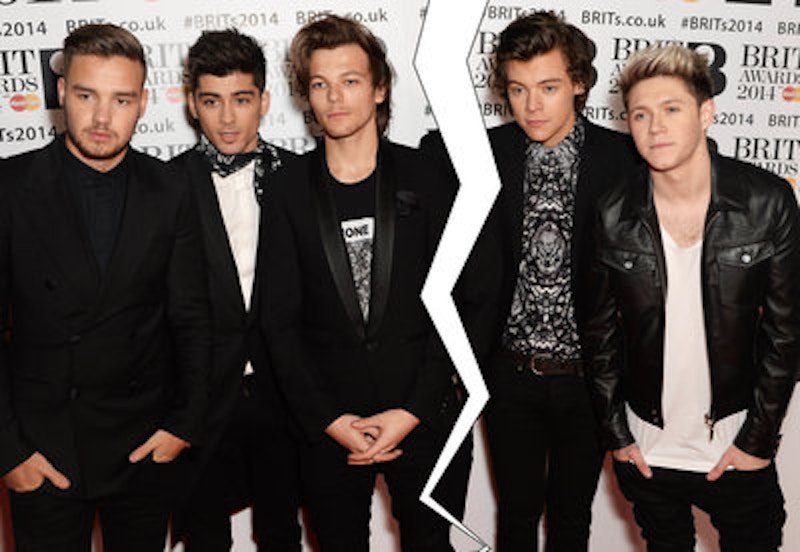 Good news for rock‘n’ roll fans—boy band One Direction may be breaking up.

One hopes the split will cause several of the members to embark on disastrous relationships, experience money problems with corrupt managers, tumble into frightening drug ordeals, and explore their psyches and how the costs and demands of fame have affected them.

In other words, maybe the One Direction split will eventually result in a few great mid-life crisis albums.

The mid-life crisis record (MLCR) used to be a staple of rock ‘n’ roll. Once past the initial bloom of celebrity and hit records, artists, worn down by touring, promiscuity, drugs and money issues, release a mid-life crisis album. These are usually weird but compelling confessionals; equal parts soap opera, psychology, accusation and self-reproach. Freed from the need to produce hits, the artist can cast out in unusual sonic territory.

The golden age of the MLCR was the mid-1970s. In 1975, after a romantic breakup, Bob Dylan, 34, released Blood on the Tracks, a searing album about grief, abuse, and losing control of life. That same year saw the release of Elton John’s Captain Fantastic and the Brown Dirt Cowboy, a brilliant and introspective memoir of John’s early career. And Lou Reed dropped Metal Machine Music, a record of noise with no discernible song structures.

1975 was also the year The Who released of The Who by Numbers. It’s a diary of Pete Townshend’s emotional bottom, and he did not spare feelings, including his own:

It's clear to all my friends that I habitually lie; I just bring them down

I claim proneness to exaggeration

But the truth lies in my frustration

The children of the night, they all pass me by

Have to drench myself in brandy

But however much I booze

I don't care what you say, boy

The mid-70s were ripe for the MLCR because the 1960s were ending, leaving more destruction than the glowing Age of Aquarius promised by the hippies. The drugs had caused slavery and not freedom, liberalism wasn’t working in the cities, Watergate had made people lose hope in authority. As the great Lester Bangs put it, “The great sixties party had a lot of ankles firmly in its maw and was pulling straight down.”

In 2015 the mid-life crisis album is in trouble. Advances in medicine, the decline in couples having children, anti-drug campaigns (a good thing) and helicopter parenting have made for healthier rock stars, as well as delaying the onset of adulthood and its problems. There’s also been a psychological shift and a loss of literacy, making the kind of self-examination that’s part of the mid-life crisis record more difficult.

Today, prevalent narcissism and the idea that nudity is insight has resulted in music that is only marginally more mature than the records the same artists made as teenagers. When a pop star like Madonna reaches middle age now, she makes a record re-asserting her never-gonna-change-anitnomianism but throwing in a defensive sort-of apology ballad to show she has some scars. Rockers near social security age promise that on the new tour they’re going to rock as hard as ever. It’s quite a contrast to an artist who addresses being halfway through life’s journey by producing mature art. Then there’s the diktat that pop music stars have to keep producing hits their entire lives. This is an offshoot of the trend known as “poptimism.” Poptimism began in the early 2000s, when some music critics began defending mainstream pop music against rock and roll snobs. Poptimists argue that top 40 music like Taylor Swift, Britney Spears and Maroon 5 are just as importantly, and perhaps even more enjoyable, than so-called important rock ‘n’ roll—Radiohead, Grizzly Bear, St. Vincent. As music critic Chris Richard wrote in the Washington Post, “Poptimists have spent the past decade righteously vanquishing a nagging falsehood: the idea that rock-centric songwriters with rough voices and ‘real’ instruments are inherently more legitimate than pop stars with Auto-Tuned voices and choreographed music videos.”

When poptimism got going, I was behind it, and to some extent still am. I’ve always loved songs about girls and cars and remembered as a kid arguing for the virtues of the Beach Boys when my friends were listening to Black Sabbath and David Bowie. Yet when does poptimism stray from defending talented hit-makers like Bruno Mars and Sam Smith to excusing away junk? When does appreciation of the simple themes of the top 40 devolve into laziness, passivity, and fear of trying something new? When does it make everything go, well, in one direction.

The recent One Direction single, “Drag Me Down”, is a good end point for the band. Like every other pop music song today, “Drag Me Down” is a plastic self-affirmation anthem. No thought went in the music, even less to the lyrics. “Drag Me Down” is the musical equivalent of soma, the “ideal pleasure drug” in Brave New World that keeps the citizenry pleasantly floating along while the totalitarian society that suppresses them goes about its business.

Good for the boys realizing this and calling it quits. I hope Harry Styles will one day produce his own Metal Machine Music.