Every Death the Same 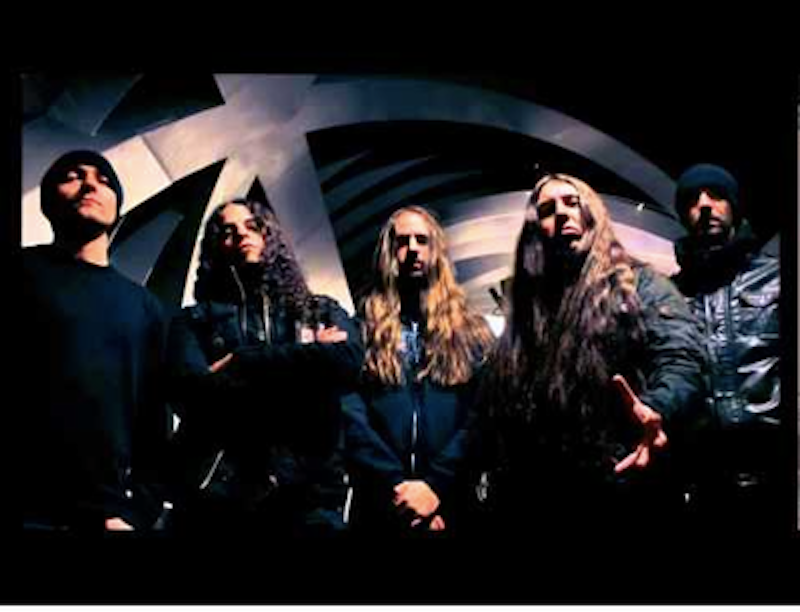 Different death metal bands can sound exactly the same. Guttural garbled vocals, guitar noise, pounding drums, etc. But for committed metalheads—well, the truth is different death metal bands still sound pretty similar. Some genres are built around the cult of individual genius and every act a special snowflake. But death metal is more about fidelity; the goal is to perfect the same tortured howl as the other pus-covered nightmare.

Still, there are some differences from group to group, in both lyrics and music. Spanish technical death metal band Wormed, for example, has an interesting thematic twist on their album Krighsu. Most death metal outfits focus on demons and/or body trauma, but Krighsu is all about twisted space future horror. "Eukaryotic Hex Swarm" begins with a spooky movie theme intro that evokes nightmare beings from beyond the stars, before the drum onslaught comes in and vocalist Phlegeton declares, "aaargg gaaah raarrrggh gaaaah" which, the lyric sheet tells me, means "Deconstruction of the space habitats/Robotising all suitable stars/Homo Sapiens/Pro-longevity cancelled."

The space rock prog concept album nods don't make the Wormed sound like King Crimson or Rush, but they do give the songs a bit of shape, swagger, and dynamism. "The Singularitarianism" is a breakneck start-stop maelstrom with a thrash edge that gathers itself into a fury before dissolving into ominous ambient interstellar terror. The central riff of "Pseudo-Horizon" is almost tuneful, a John Williams motif trying to struggle into the sky while being ruthlessly bludgeoned. Phlegeton sounds like he's speaking some sort of twisted alien tongue composed of wormy whispers and choked nightmare sibilants. Wormed gives us death metal of the future—which as it turns out, is a lot like the death metal of today, with just a couple of minor re-programmings necessary to turn the unstoppable demon into an unstoppable Terminator.

Wormed's space-obsession is an enjoyable gimmick, but I think California band Inherit Disease's new album Ephemeral is actually more enjoyably brutal. All death metal vocals are low and guttural, but even among his demonic burping peers, Obie Flett's demonic burping is remarkable; every utterance is a death rattle. The sound on Dan Osborn's drums is impressive as well; he sounds like he's playing them at the bottom of a well. The murkiness helps get Ephemeral into that perfect death metal place where the band is playing breakneck riffs while still sounding like they're slogging across semi-liquefying carrion.

My favorite track on Ephemeral is "Digested by Invertebrates," which improbably lives up to its name. The first half of the track is a head-nodding, punishing buzz that could be shoe-gazey if it weren't for the clotted drums thudding around it. Then the second half picks up speed, turning into a pummeling start-stop that struggles for rhythm before the invertebrates drag it down again. The end makes me laugh; after all that dramatic tension, Flett just goes, "urk blargh" and that's it. The stomach acids finally got him.

Also a highlight is "Lord Cyborg." It doesn't have the musical sci-fi nods you get from Wormed; instead, Inherit Disease points to human/robot fusion by having Osborn play at speeds that seem faster than mortal while Flett vocalizes like a perforated piece of meat. A couple of guitar squalls rise above the much right at the end, a tortured hint of personality immediately strangled.

Strangling personality is what death metal is all about; corpses have faces, but the invertebrates digesting them don't care. All death metal should strive forever for a perfect furious inhuman blankness, a cloned legion speaking with one voice from many terminals. The fact that you can tell Wormed and Inherit Disease apart is in some sense a failure. All flesh is weak—which could be song title on a Wormed or Inherit Disease album.