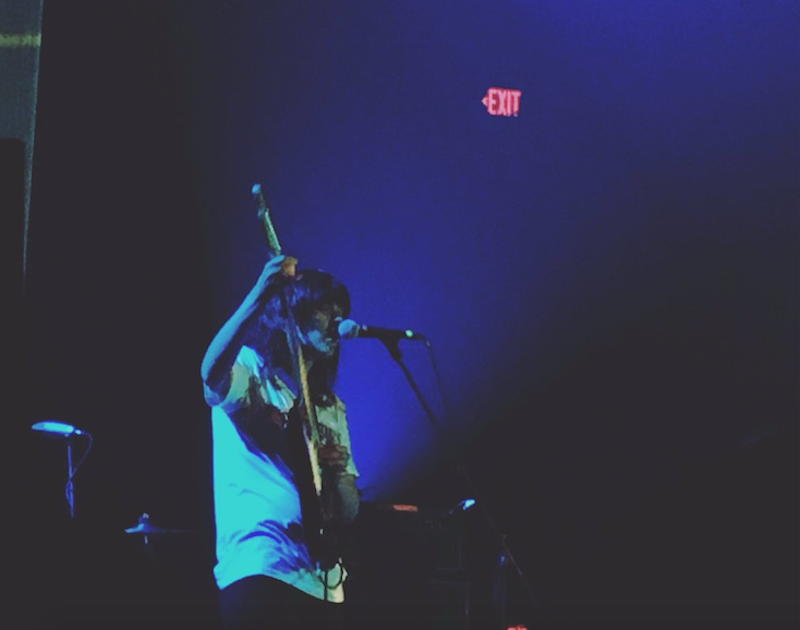 My love for Courtney Barnett is inexplicable: there’s no reason this kind of straightforward open chord indie rock should be doing anything for me in 2016. She isn’t doing anything new or progressive, spinning the same wheel that Elvis Costello, Bob Dylan, and Chrissie Hynde gave up long ago. There are so many revivalist and copycat bands crowding the indie rock world right now, and on paper, she should sit alongside Modern Lovers tribute band Parquet Courts, or Pavement-obsessed Speedy Ortiz. But she’s got songs—great songs—and ultimately, that’s all that matters. I missed her at the 9:30 Club last year, and jumped on the chance to see her here in Baltimore, despite the fact that the show was at Ram’s Head Live, perhaps the most poorly designed venue I’ve ever been to. It should be Baltimore’s 9:30 Club: it’s roughly the same size, but the sight lines are completely fucked throughout the whole place. Barnett said “So many layers…” in the middle of the set, looking up at all the overlapping balconies and levels in the room. I don’t care that it’s in an alcoholic amusement park, but the architect behind that place belongs in jail.

Barnett’s debut from last year, Sometimes I Sit and Think, and Sometimes I Just Sit, hits the spot and feels like just enough, maybe a bit too much. I’m not sure where she could go next. The two new songs she played on Wednesday—“Three Packs a Day” and “Pickles from the Jar”—feel like castaways and driftwood floating around the style and sound of her excellent debut and her double EP A Sea of Split Peas. Then again, what’s there to reinvent or radically shift away from? She’s a phenomenal singer and songwriter, even if “Depreston” towers over the rest of her work. It’s a song that feels timeless and essential, an instant classic with only two chords, Fmaj7 and C. Her solo on the record is breathtaking, beautiful and understated and gorgeously treated with chorus. Barnett plays in a trio live, and without a second guitarist, songs like “Depreston” and “An Illustration of Loneliness (Sleepless in New York)” felt empty without their lead lines clearly articulated.

Her performance was oddly rushed and perfunctory, too. Even though it was the first night of a short victory lap tour, Barnett seemed tired and oddly quiet (maybe she got stoned with Evan Dando beforehand—he’s opening up for her in something called The Sandwich Police). I was talking to someone the other day about her recent performance on Saturday Night Live, and he said Barnett reminded him of Kurt Cobain. I’d never made the connection before: Barnett’s music lacks any of the intensity and suicidal angst of Nirvana, but her body language and slurred delivery on Wednesday made the comparison completely click in my mind. I don’t think she’s made a record quite as fully formed or consistent as Cobain yet, but “Depreston” is a masterpiece, and I hope she takes a break from the road to write more, as much as possible, because with this schedule, it’s easy to wear out your welcome only to come back to a disinterested audience.