Miranda Lambert’s made the best country album of 2016. 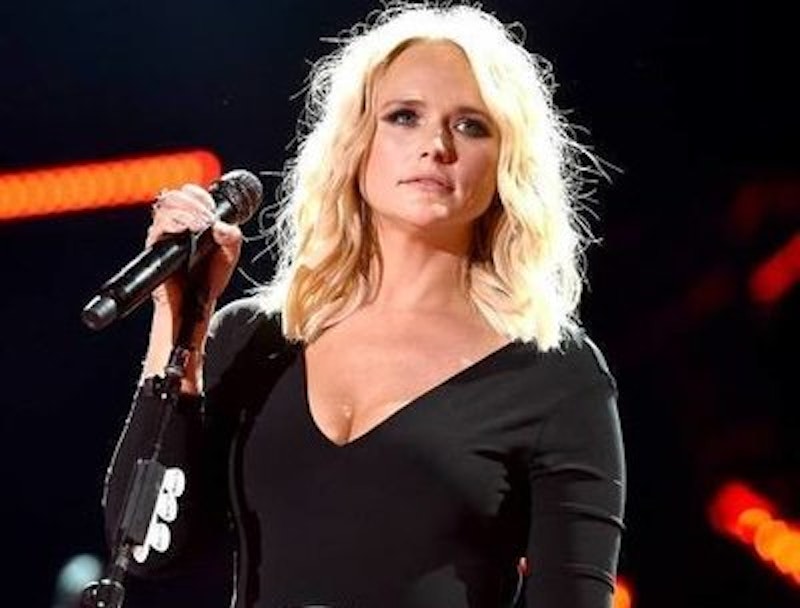 For reasons too excellent to mention, it falls to me to “anoint” the new Queen of country music. And so I acknowledge and name her: Miranda Lambert. It’s a hallowed pantheon, and in joining it, as in heterosexual marriage, Princess may lose her Daddy's name: Kitty, Patsy, Tammy, Loretta, Dolly. These women are mated not only to whomever they may have reproduced with or cheated on, but to the history of the form, both as its repositories and its creators: its brides and its mothers. Others have appeared almost randomly, like mutant muses with emotional superpowers, or rather, like Christian miracles: Patty Loveless, Jeannie Kendall, Lucinda, Emmylou. “Miranda” fits well in that company.

Faith Hill and Carrie Underwood have made some decent records, but will never Ascend. Real Queens are characterized both by an apparently complete emotional vulnerability and a hard-won ferocity. They enact a cycle of departure and return to the basis of the style, always escaping and always headed back home. They embody various flavors of hyper-femininity, and yet, or perhaps so, their sheer steadfast estrogenic kickassedness cannot be gainsaid. They are great in their despair, in their endurance, and in their aesthetic transcendence of the toils of heterosexual femaleness in patriarchy.

Miranda does this as well, or is this as intensely, as Loretta, as Patsy, I tell you. (I am excepting Tammy Wynette, who I think is the best—the most intense country singer ever. It's thermobaric, baby.) And Miranda does this as well as she ever has on The Weight of These Wings, which is saying something, because all of her previous five albums, plus two with her girl group Pistol Annies, are wonderful. My complete playlist is 121 songs, and my “best of” gets more than half of these, a ridiculously high percentage as these things go. (I love Emmylou Harris, but boiling it all down to the best-of picks up about 20 percent of the songs.)

Miranda's at once a potent commercial force and a creature out of time: there is hardly a nod on this album to the current bro country sound. She doesn't try to rap. There are a lot of marks of contemporary production, though also some traditional arrangements. Either way each song sounds like it does only because that's intrinsic to the way Miranda hears and performs it. She leaves a lot of rough edges and sounds on record like she's performing live. She’s written or co-written many of her great songs, and she performs every song as though she wrote it, as though the words and the experiences they express are just exactly her own.

To some extent her rowdy party-girl persona and George-and-Tammy-style marriage and d-i-v-o-r-c-e have obscured her qualities as a pure singer. No one her age can just nail a straight country song like she can, as in “To Learn Her” and “Things that Break.” She has the range from beautiful pure soprano to hostile growl to happy hoarse party-anthemic. It's too easy to miss the first of these. But you should sample songs like “Pushin' Time” and “Dear Old Sun”: gentle songs in an acoustic register, which she frames in flawless crystal. On The Weight of These Wings, as everywhere in her oeuvre, she has a broad stylistic and emotional range, but constantly reverts to a relatively straightforward blues-country melodic vocabulary, like Lucinda.

Honestly, I was waiting for the big splitsville album, which I thought was likely to be devastating to Blake Shelton, for few can kick your ass in song or put your life to the torch like Miranda if you do her wrong (“Kerosene”). It's often occurred to me that I'd rather listen to her records than be her man. But here she's more self-reflective or even self-lacerating than on the attack. And indeed there are passages of what we might call depressive realism: “Runnin' Just in Case” or the fine first single “Vice.” These songs have a subdued emotional tone that builds in power as they establish a mood, enhanced by production that creates a space with echo/twang and fills that space with semi-toxic nicotine smoke, a touch of Daniel Lanois-style modified North Americana.

And then there’s the theme of the first single: “Vice.” As with many artists who constantly seem to be celebrating/struggling with/being brought to despair by substance abuse (Chris Stapleton, for example), one starts to become concerned about the performer in proportion as she gains your respect and affection. Fortunately, any future rehabs and/or relapses are likely to lead to excellent country songs. In her themes of the geography of the American south and shattered love, Miranda is likewise connected to Loretta, Dolly, and Lucinda. She is very Texas, I believe, but she might run almost any element of the tradition at you, as in the Bo-Diddley intro to “Ugly Lights.”

But despite the beautiful gloom, the irrepressible Miranda does rise up and overcome herself and her entanglements, over and over again. That’s the essence of her story as she tells it on her records. And characteristically as well, she shelters from the boy problems in zones of female solidarity and rivalry, here represented in “We Should Be Friends” or “Pink Sunglasses.” She's already had effects as mentor or influence on female artists such as Ashley Monroe and Maren Morris and as a patron of underknown songwriters like Fred Eaglesmith and Luke Dick, who made a number of contributions here. She writes and acquires lyrics of surprising poetry, as in the quietly ravishing “Getaway Driver” or “Well-Rested.”

The Weight of These Wings is the best country album this year. (Though I also very much love Brandy Clark's Big Day in a Small Town.) It weighs in at 24 cuts and amounts to a suite, with many shifts and connections of mood and sound and sentiment. This is the Assumption baby, the apotheosis. Long live.

Miranda, Best of the Best of List, pre-Weight of These Wings:

(7) The House that Built Me