All he needs now is a commemorative postage stamp. 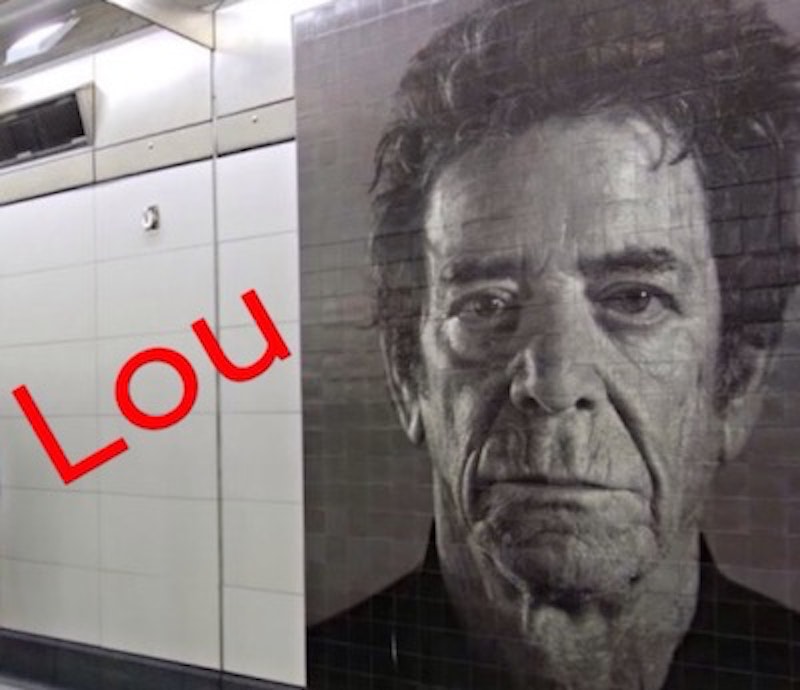 It's still a pleasure listening to the Velvet Underground on those nostalgic nights looking back to the glory days of misspent youth. Especially the sappy love songs. "Who Loves The Sun" and "I'll Be Your Mirror," just corny enough to be hopelessly romantic. "Sunday Morning" and "Pale Blue Eyes" epitomize sentimentality. Brutally honest. An overdose history of songs, some considered dark and moody, others finger-popping and toe-tapping happy. The bright hooks and snappy refrains of a tunesmith at play, swooning head over heels in love with the language of life.

Coming of age in that uncertain era of peace, protest, love and war. I won't elaborate on the 10 or 20 best Velvet Underground songs like some half-baked music aficionado. I won't weigh in on the most underrated or overrated tunes of all time like "Sweet Jane" or "Walk On The Wild Side," even the scandalous credos of "I'm Waiting' for My Man" or "White Light/White Heat". The anthem "Heroin" is a different kind of love song to one's own personal addiction. As Lou Reed stated, he wrote that song while the Beatles were singing, "I Wanna Hold Your Hand".

Each Lou Reed song is a poem in a musical nutshell. The sultry voice of Nico as a muse in the early days lends credence to a long set list of original music. An oddball group of misfits frozen in a cityscape of ageless wide-eyed wonder. Performance art was born, along with the prodding of  patron Andy Warhol as the fickle Svengali. The album Songs For Drella, after Warhol’s death revealed the love Lou had for Andy. Knock opportunity out cold and fuck luck’s last chance. Who's the king of Pop? Here street hustlers, junkies and sad queens run rampant. Skinny transvestites prance and dance down at Max's Kansas City all night long. Revealing a new species. Reveling in all tomorrow's parties.

Reed was a confusing counterpart of all that reflected 1960s "Underground" culture. It was all the youth movement had to offer. Running interference for the lesser evils of Top 40 radio formats and the old form’s mutation of what's cooler than cool. Phantasmagoric crossword puzzle jumbled in an exquisite blur. Melding a vision of artist, poet, musician and self-made future man. New breed of an entertaining court jester for the weirdo set. The anti-hero of space age rebellion. A complex layer cake of desire. Laid out like lines of coke on a dirty broken mirror. The autobiographical chameleon ghost wearing an ill fitting suit surfing the geography of groovy intent.

Hanging out with restless emotional baggage becoming too much too soon or too little too late. But right on time either way. Way ahead of the curve. The sensitive son of a bitch who goes insane because love, hate and a soft heart are never enough to survive the mediocre bullshit of a town without pity. Reed embodies the mystique of a long gone NYC. Yesterday's vintage gone sour.

Beatniks and hipsters clash with hippies and squares tip-toeing a minefield of bad habits. Beer-swilling rednecks reject the latest and greatest atomic bomb rock ‘n’ roll. Revolutionaries touting psychedelic anarchy. Hedonistic rituals in concert with ancient bebop rites of passage to forbidden kinky places of twisted desire. One could claim Reed's music singlehandedly altered human life as we know it. Even more extreme, the music that changed the course of an entire generation’s one-minded opinions of what’s normal. A reluctant renaissance man of the counterculture in the great avant-garde beyond realities flimsy borders. An underground of plush soft crushed velvety smoothness. Trapped in a lava lamp floating around black light day glow fluorescent third eyes.

Lou Reed, mysterious prince of darkness singing a ding-dong Daddy O. The self-proclaimed rock ‘n’ roll animal. A nice Jewish boy from Long Island, hung up his guitar in 1970 proclaiming himself to be a poet. Pursued the literary outlaw life. A student of poet Delmore Schwartz. Reed decided he no longer wanted to play rock god anymore and became a word slinger for a tedious New York minute. Whoever said, "first thought, best thought" added "last thought, worst thought." Nobody chooses to be a poet and nobody begs you to be one. In Reed's case, maybe he had to transform and resign himself to fate. He had to reject who he was.

To stand alone and face the demons you malign. Still coming out on top, cream of the crop in a world you just made up. As if we have any idea what we do in the waking hours. Or contending with our nightmares minus the dreams. Poetry wasn't a big enough monster for Reed. He needed to save his soul with the holy immaculate conception of a Coney Island Baby. In 2018, a book of Reed's early poetry was released. Transcribed from a live cassette recording at St. Mark's Poetry Project in 1971.

The book’s titled, Do Angels Need Haircuts? It's a small part of a massive archive now housed at the New York Public Library. There are thousands of hours of recordings, plus interviews, documents, and photographs available to hear and see on request. On the way to the library stop at the 2nd Ave. subway to see the colossal mosaic portrait of Reed by Chuck Close. All Reed needs now is a commemorative postage stamp.