A psychotic storm of static sound on We Pull the Stars Over Our Heads Like Covers. 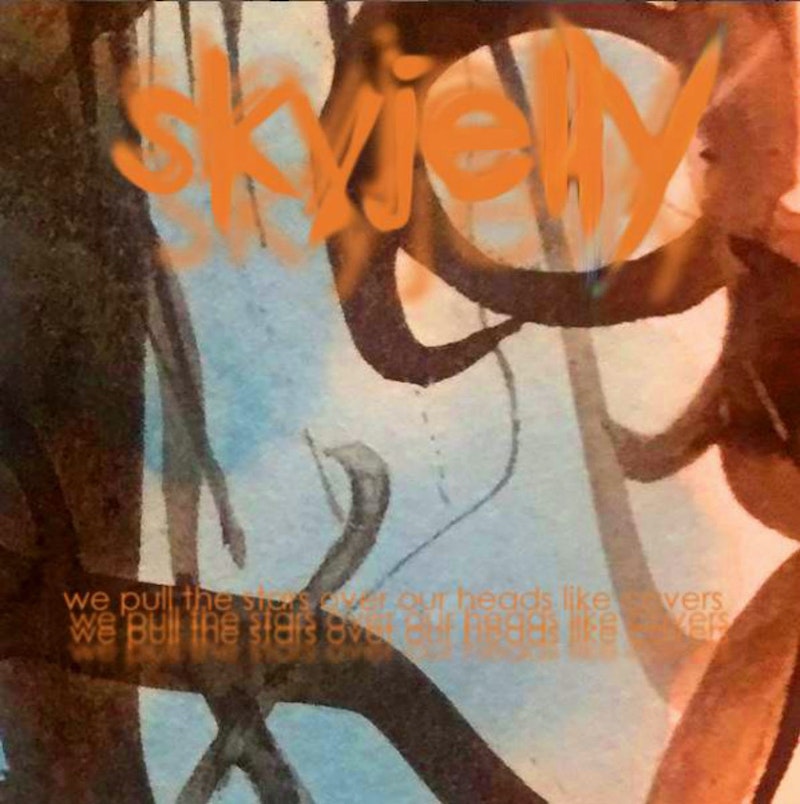 Skyjelly's latest record We Pull the Stars Over Our Heads Like Covers nails every box on my checklist. Influences stem from multiple directions, each branch reaching toward a different style of rock experimentation. Early lo-fi 1990s emo mixed with fuzzed-out psychedelia fill this broad yet concise album. Repetition is key in the universe of Skyjelly, a tricky band to pin down. Funky guitar riffs collide with incessantly pulsating drum loops. Deep-rooted bass grooves wobble infrequently. Sounds are exorcised from within and cast back out. The remains are sprinkled with incoherent and out-of-tune vocals.

Skyjelly produces a warm yet anxiety-inducing effect on the psyche. The music is unsettling in the way that a trip to a psychotic dentist might be. One moment you're sitting in the big white chair, stretched out and relaxed, calmly waiting for a teeth cleaning. Suddenly an arm shoots out from the shadows. All you remember is a rag drenched in chloroform stuffed into your mouth. Dozing in and out of consciousness, you finally wake up to a jagged scalpel scraping against your teeth. Peering downward, you watch helplessly as each tooth is individually ripped from your gums.

But all hope is not lost. During the surgery there are moments of divinity such as in “Hello My Friend” and “White Wolves.” You feel so good you praise the sun for giving light. Everything is exactly where and how it should be. God begins to take shape through the emergence of purity and love.

But with every high, soon comes the downfall, such in the final track “K-Dot.” The carriage flies off the track and descends into the earth's core, spiraling down into fields of hell and fire. A deranged Robert Pollard is grinning with a pitchfork in one fist and a microphone in the other. He screams madly into your eardrums, yet no words are decipherable. Human-made language is not important in the land of Skyjelly. The expression of repetitive movement is the key to their madness.

Though the vocals are reminiscent of Guided by Voices, the music strays considerably further afield. Skyjelly's songs are longer than those of the lo-fi rock giants, who are distinguished by their catchy rock songs. The music instead resembles White Light/White Heat-era Velvet Underground. The beat persists like a busted metronome while the instruments sound like wild jackhammers pounding into thick concrete. There are moments of We Pull The Stars that mock serenity, while other sections mimic the experimentation of off-kilter noise. Spontaneous screeches of feedback occur throughout, proof that Skyjelly cared enough about the right things, like sound, and very little about the wrong things, like production. For this album it works.

If Mark Kramer were younger and more active, Shimmy-Disc would have eaten this stuff up. Bits of early Ween and Butthole Surfers bleed through the cracks of psychedelic dissonance. Perhaps that's why the experimental Boston-based label I Heart Noise released this record. A perfect fit for the perfect label. Though undeniably eclectic and ranging wildly in quality, I Heart Noise never fails to pique my interest. We Pull The Stars is no exception.

—You can purchase or stream the album here.