Happy Birthday, "Stand By Your Man"

An emblem in the history of gender relations. 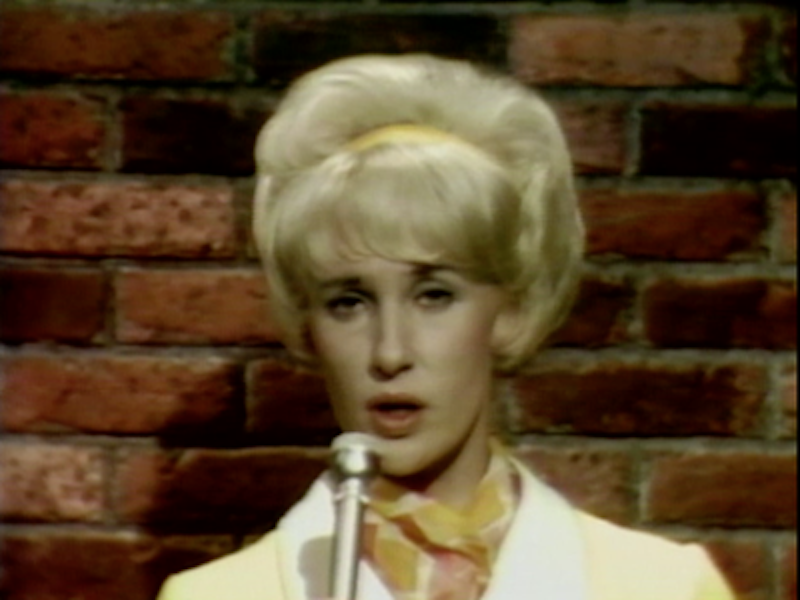 Few songs have ever had as much cultural currency, or had a longer float down the cultural current as Tammy Wynette’s “Stand By Your Man.” And few songs have been more celebrated—it often polls as the greatest country song of all time—or more reviled. "Stand By Your Man," recorded 50 years ago, has been relentlessly parodied, by everyone from the Blues Brothers to the Muppets. It was a political issue in 1992: as "bimbos" erupted around Bill Clinton, his wife said that she wasn't "some little woman standing by my man like Tammy Wynette." This irritated Tammy, who—though she may have baked cookies—had been a touring professional musician for decades, whereas Hillary was known only as someone else's wife. Indeed, as her own trail of four ex-husbands—among them George Jones—suggested, Tammy had not herself notably stood by her men, though Hillary herself notably has.

Hillary and Tammy are soul sisters, and we might well hear Tammy's whole oeuvre as expressing the tortured soul of Hillary Clinton, since she cannot express it herself. That’s exactly what country music is for. Living through the heteronormative era was certainly very challenging for them both, as it was for so many of us breeders, whether we were born that way or just backed into it by psychological repression. We can all be grateful that the era of cross-gender coitus is over, and historians will eventually study "Stand By Your Man" and Tammy's other tortured documentaries of marriage, cheating, yearning, and divorce in order to understand heterosexuality, the way they study the films of Leni Riefenstahl to understand Nazism. I'd encourage anyone to listen to Tammy, however, for sociological reasons or no reasons at all.

I regard Tammy Wynette as the greatest singer in the history of country music, and one of the greatest of the 20th century in any genre (other candidates: Billie Holiday, Aretha Franklin). Her performance of "Stand By Your Man," and of a number of other songs, particularly early in her career, was thermobaric: no popular music singer has ever been more emotionally intense (though her contemporary Janis Joplin might be her equal in this regard), or has given a more vivid sense that she was laying herself bare in each performance. Tammy, the central character in her own het pilgrimage, portrayed herself both as emotionally devastated and emotionally resilient. "I wound easy," she sang, "but I heal fast."

Whatever the direct content, the quality of the performance is extraordinary, and it affects the meaning of the lyric, which takes on layers of complexity under Tammy's interpretation. One shouldn't think of it as some sort of manifesto or a polemic, but rather as a work of art which explores the content of traditional heterosexuality from many angles at once. A number of her songs—"The Ways to Love a Man" or "Enough of a Woman," for example—are even more problematic from a feminist standpoint, but are similarly multivalent.

One way that this effect of simultaneous emotional vulnerability and emotional power is achieved—and this is also due to her great producer (and her co-writer on "Stand By Your Man") Billy Sherrill—is by a use of dynamics that is about as extreme as anything in the history of popular music. The song ticks along fairly quietly and then suddenly swells in volume and intensity on the chorus. Sherrill constructs the instrumental track to reflect this tendency in Tammy's style or force it out of her; she keeps pace perfectly with the instrumental swell. They deploy this approach even more extremely in some other recordings from the late-1960s, such as "Too Far Gone."

Tammy's timing is also extreme and devastatingly expressive, singing very far behind and then right on top of the beat as though waiting for and then trying to seize the cure or as though inhabiting the very shape of longing and its momentary satisfaction. That timing is of the essence of country music, and it corresponds to the unmatched dynamics. She's always threatening to unleash a new level of intensity.

Sherrill's approach was naturally suited to the young Wynette, who was discovered as a hairdresser in Tupelo, Mississippi. She was a fine singer, but more than any skill, she conveyed in each performance a completely unguarded emotional presence. At that phase of her career, she was still something less and something more than a solid professional. To hear the emotional effect at its most incendiary, sample her early demo, accompanied only by piano, for "You Can Steal Me." The microphone can't take the force.

In her performance of "Stand By Your Man," in part because of all these factors or strategies, she’s in a complex relation to the lyric. She’s not expressing the joy of monogamous love, but its extreme difficulty. The song, in her interpretation of her own lyric, is about the necessity of leaving, arrived at through the pain of hanging on. She’s urging herself to stick it out, by running through a series of descriptions of a traditional woman's role. "Give him… something warm to come to when nights and cold and lonely," and "keep giving all the love you can," she insists to herself, until she just can't any longer. The woman made her career on songs about divorce, after all.

The song is also about the way that traditional heterosexuality made men and women incomprehensible to one another. Traditionally, such attitudes had been expressed primarily by men, who often held women as either charmingly or irritatingly incomprehensible. Men told one another, for example, that no one—perhaps even the women themselves—knew what women want. Men tended to roll their (alright, our) eyes at women's unintelligible emotionality. Tammy just reverses this: he will be doing things that "you don't understand." These things, judging by other bits of her own life and body of work and the contemporary country repertoire, would include drinking himself into unconsciousness and violating his marital vows. But he's not going to make some kind of rational sense; after all, "he's just a man."

If there’s a single attitude toward men expressed in this performance, layered with both sincerity and irony, self-consciousness and self-doubt, it’s sheer condescension. Men are fools; men are bad; men make little sense. You can take a vow of isolation or chastity, but short of that you're going to have to deal with these creatures somehow.

In returning to the original recording and trying to read "Stand By Your Man" in a more complex way, the goal is to clear some of the decades of construals and reconstruals and misconstruals and make the song available again as an original work of art. Even if it’s everything that Hillary Clinton thinks it is, it's a great performance and an emblem of a certain moment in the history of gender relations. On its birthday, there's no point in condemning it yet again, and in many ways the conditions it describes no longer obtain.

It stands not only as a document of those conditions and a complex response to them, but as a trace of the fierce and unguarded presence of Tammy Wynette's voice 20 years after her death, and of her total embodiment of a particularly rich song.

It's easy to go wrong listening to Tammy Wynette on a random search. She recorded rafts of mediocre, sort of pseudo-sophisticated albums in the late-1970s and 80s, and perhaps didn't understand the source of her own power. When “neo-traditionalists” like Dwight Yoakam showed up around 1990, she said "We've spent 20 years trying to get beyond that sort of stuff." But I think her best early recordings are the best recordings in the history of country music.