The dysfunctional family reunion of sound on Phantom Paddle Boat. 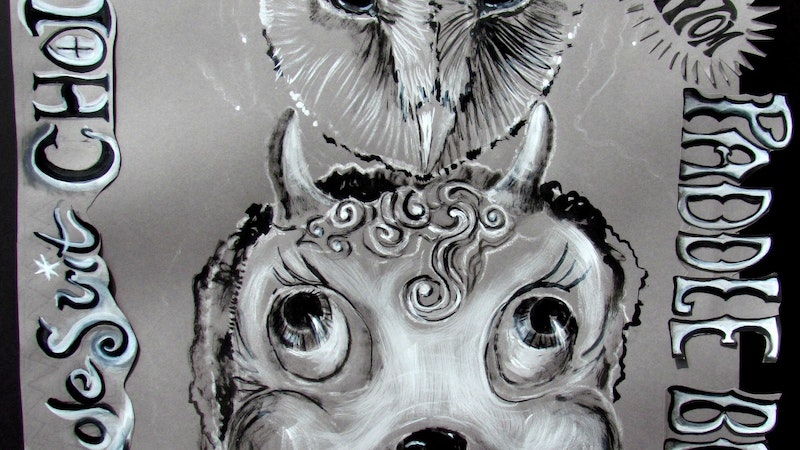 Cackling from the earth's core bob the heads of Baltimoreans Liz Downing and Rupert Wondolowski—they are Mole Suit Choir. In 2016, a GoFundMe was started asking fans and fellow book nerds to donate to a worthy cause, i.e. the pressing of their forthcoming record, Phantom Paddle Boat. To reward charitable donations, one was gifted, nine or so months later, an exclusive copy of the limited edition vinyl.

The moment the needle penetrates the grooves, long tentacle vines crawl out from under the floorboards, cradling you in its havoc. The house begins to shake and sway. Through the cracks in the windows, wild neon irises grow. From the walls, purple dandelions with the heads of snakes. The music synchronizes itself to the groove of nature, morphing to the strange rhythms and peculiar pairing of Wondolowski and Downing's vocals. The duo is inevitable—that grows ever more certain after every listen.

The second track “Strawberry Xanax” is a a title I could relate to as a dazed listener drooling over a bowl of freshly cut fruit. A sinister sneer preens from a banjo as Downing's dreamy windpipes gloat in splendor. Halfway through, Wondolowski chimes in, singing as if he’s preaching the wisdom of a million lives lived over. He has walked through the centuries alone in the thick snow with nothing but a walking stick and a wool satchel carrying the virtue of each experience. He hasn’t spoken in several thousand years and now’s the time for him to share his stories to the 21st century video game spazz who looks onward at Wondolowski as a strange and untimely spirit.

“I am not a voice crying in the wilderness,” sings Wondolowski. “I am the wilderness.” In “Lonesome Cowboy on the Protein Deprivation Trail,” Mole Suit Choir acts as transcriber, reciting the words of the late poet Chris Toll. “Lonesome Cowboy” is one of the most beautiful songs I've ever heard. “I know the darkness,” they sing, “I love the light.” These words remind me of the past I no longer tend any attention to. I’ve witnessed what lurks under the cruel nubs of sorrow, the fire-breathing demons of depression. I’ve been squashed by the devil, spitting streaks of chemicals into my open eyeballs. And I’ve pushed through it to the other side, is what Toll nods to through use of imaginative metaphor.

“Aren't you tired of living in the tiny fortress we call the body?

Aren't you ready to be born into someone bigger?”

Death doesn't have to be the end, Toll suggests. It can be the beginning of something greater than anything we can fathom. Toll gives morbid-minded pessimists like myself a vast array of hope.

Pedal steel virtuoso Susan Alcorn makes a humble appearance on the track “Pills,” which is a satiric take on the 21st-century pharmaceutical uprising. “And the rain was pills,” the duo sings, teasing the essence of my existence. Alcorn's pedal steel fits snugly in the strange world of Mole Suit Choir. Also featured in Phantom Paddle Boat is poet and mail artist Blaster Al Ackerman, whose widest known success is the indirect writing of Throbbing Gristle's “Hamburger Lady.” But Ackerman's talent and originality are best displayed in his book Corn and Smoke as well as his record I Am Drunk. Mole Suit Choir does proper justice in bringing Ackerman's absurd obsessions to life by accompanying the sweet melodies with a Conrad-esque violin drone.

Although generally unknown to the outside world, Baltimoreans will recognize the poets, musicians, and artists featured on this album. Chris Day, now a Chicagoan, designed the album artwork. The poem, “Increasingly Virtual Worlds” by Param Anand Singh, is wonderfully transposed. Ruby Fulton plays the flugelhorn on “Strawberry Xanax” and “Amply Coated.” It's like a dysfunctional family reunion. Phantom Paddle Boat feels as if it was made for me only.

This record can be purchased at Normal's Books & Records.