All Dogs Kick the Pop Punk

On their debut LP, Kicking Every Day. 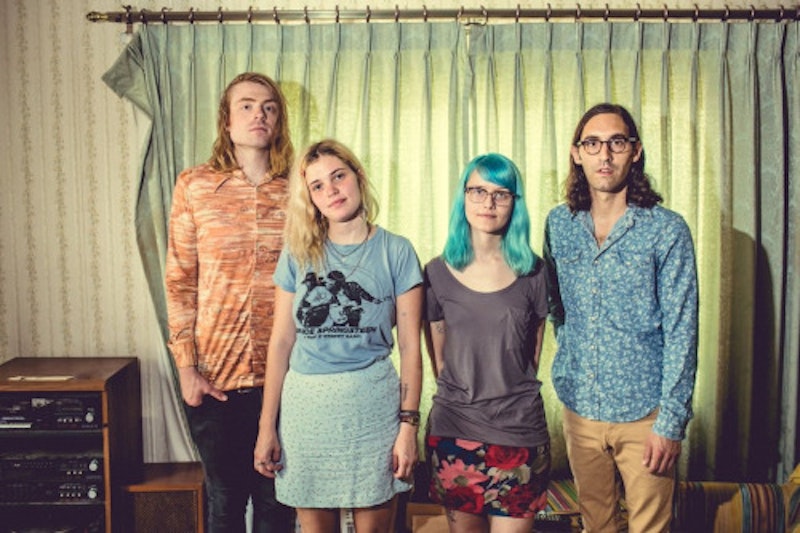 Columbus, Ohio’s All Dogs have steadily gained momentum since their 2013 split tape with Olympia, Washington’s Slouch, mainly because of prolific frontwoman Maryn Jones. All Dogs have released material in each of the last three years—the split tape, an EP, and now, this year, their debut LP, Kicking Every Day—and Jones put out her first solo full length, as Yowler, in February (not to mention a few songs with Saintseneca).

I’ve been to plenty of shows this summer where the opening band was my only reason for being there, but that was ostensibly everyone’s mindset at Baltimore’s Metro Gallery on August 19. All Dogs played before The Sidekicks (whose music is as generic as their name), but it was clear no one came for the headliners. The floor swelled when Jones & co. walked on stage, and quickly shrunk once the band directed the audience to the merch table, where copies of Kicking Every Day sat on sale 10 days before its official release. I took the bait—at $12 an LP, why wouldn’t I?—and left The Sidekicks mid-set so my friends and I could listen to their tourmates’ debut.

And it’s great. They’ve evolved from the messy pop punk of their EPs—although some critics still classify it as such, Kicking Every Day is about as pop punk as Swearin’ or Speedy Ortiz—into full-on indie-garage rock, with album highlight, “Skin,” passing the five minute mark. It fits. What they trade in immediacy they make up for with intricacy—I’ve played the album on repeat for the last six days and have always come away with something new.

That’s not to say this is a difficult album—it’s one of the catchiest of the summer—it’s just not condensed and concentrated as, say, Joyce Manor’s or Chumped’s recent full-lengths (lead single “That Kind of Girl” is the one aberration. It could easily fit into either of their catalogs). With Kyle Gilbride producing, it’s no surprise that Kicking Every Day is reminiscent of his work with Swearin’ (especially the two best songs from their sophomore LP: “Dust in the Gold Sack” and “Watered Down”). It’s also not shocking that Katie Crutchfield (aka Waxahatchee) publicly endorses All Dogs every chance she gets. And therein lies the one bummer of this album: like all 1990s-inflected guitar music, it can sound a little derivative. I try to avoid this conversation, because whenever you get into it with a self-dubbed musical aesthete, All Roads Lead to Pavement turns into All Roads Lead to The Fall turns into All Roads Lead to The Stones and then, of course, All Roads Lead to Muddy Waters, and honestly at that point I usually smell a lecture on cultural appropriation, so I just nod at the S.D.M.A, commend their sensitivity, and excuse myself.

But that doesn’t bother me: I’ll listen to guitar music until I croak, so long as Drake is always available as a palette cleanser (I bet Drake uses the phrase “palette cleanser” often). I wonder if All Dogs knew the metaphorical resonance of making “Black Hole” the opening track: it’ll suck you in and keep you; Kicking Every Day will crush you so hard you’ll never forget it.