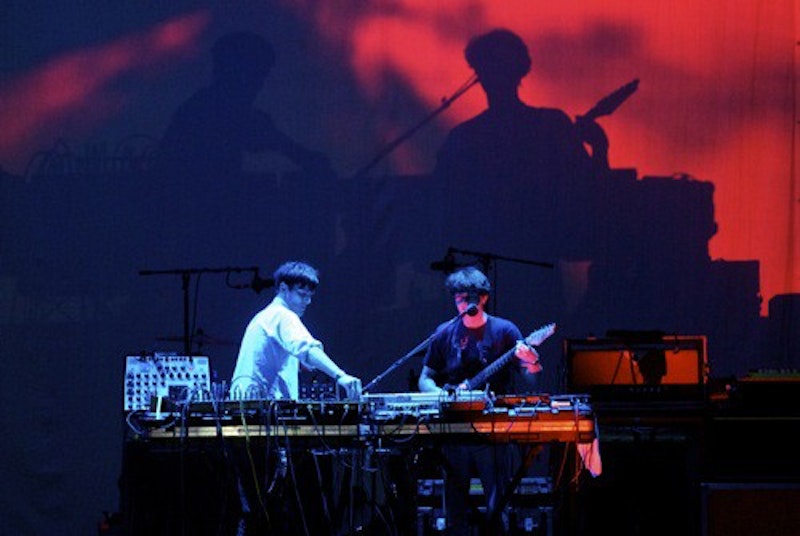 “Is grim, yeh?” “Oh yeah, Pete… turn up the low-mids.” I am squatting in Noah Lennox’s garage in Lisbon, Portugal for the week. The space is cold and clean: cement, synths, rugs, and a leather couch. Producer Pete Kember, aka Sonic Boom, has just finished rolling spliffs for the three of us, and Mr. Lennox is queuing up some B-sides he’s about to release on his Crosswords EP. Mr. Lennox goes by Panda Bear professionally, but insists I call him Noah. Neither of them knows I’m not here on assignment—I just picked a particularly sweet Airbnb listing. Here in Miosiotis Garage, Lennox wrote and recorded his fifth solo album Panda Bear Meets the Grim Reaper, released earlier this year to fawning praise. The album is already long, but there were even more songs left off the record that didn’t fit. Three came out last year on the Mr. Noah EP, and here we have another four to close out the Grim Reaper era, Lennox’s most prolific period to date.

“Rooster, could you pass the can?” Noah’s taken up chewing tobacco, though he insists it’s “just a phase.” I grasp the coffee canister with my spur claws and pass it up. “Grazi” nods Noah, before pressing play on a new mix of “Crosswords,” the third track on Grim Reaper. Certain elements, like the rhythmic bubbling bloops that color the outro are brought to the fore from the very beginning. Noah’s dogs have better ears for these kinds of differences, but its beautiful tune remains. “Ey, Roos, spliff?” I can’t remember the last time I smoked grass, but when in Portugal… I take a modest hit as “No Mans Land” begins, and Pete is totally spaced, bobbing his head and harmonizing with Noah’s falsetto. I feel a bit like an old fogy, because the swirling, spasmodic sound that drives the track reminds me most of “Tomorrow Never Knows” by The Beatles, but I’m too embarrassed to point this out even though Noah is big John Lennon fan. Fortified by spliff, I ask, and Noah smiles slyly. “I’m just glad Albert Goldman isn’t alive to write my book.” I’m not interested in exploring this any further, and make sure not to look in any closets during my stay.

Everyone’s stoned by the time “Jabberwocky” begins, where Noah sings, “Shoot for the stars, then you only end up lost in space.” I glance, and now Noah’s glazed, too. “I really wanted to put this on the record… [spits] but it didn’t really fit in the sequence, and besides the chord changes are very…” Now all of a sudden I’m lost, fuzzy from the grass and unable to understand the elemental music theory Noah is going on about. He can tell I’m a bit out of it. “Don’t worry, Rooster—I’ll put these on a disc for you. Pete’s got my early demos for the record, too.” I look back, and Pete is grinning like a madman. “Chavvy Cosplay, then?” This just about triggers my Otakon PTSD before Noah clarifies. “Oh yeah, I’ll queue that up.”

“Cosplay” is the last song on Noah’s new EP, but because of my history (another time, I’ll tell you what I went through in anime Abu Ghraib), I’ll refer to it as “Marijuana Makes My Day” from here on. Those are the only words in the whole song, repeated over and over like a mantra, with harmonies that Noah’s added since a demo of the song surfaced early last year. Marijuana makes my day—yeah man, me too. What else is there to say? “Hey man, you need a place to crash tonight? I got some hay in my yard.” Dude, I already Venmo’d Pete like 20 bucks. I thought you knew I was coming. “Yeah—aren’t you from Rolling Stone?” Uh… yeah. I guess it was under Jann’s name. Before leaving the garage, Pete hands me a CD-R of the EP and those early demos. “Itz right manic, yeh? Hold on, I need to go slag off at the Tesco for fags.” Pete darts down an alley in the Principe Real neighborhood, and Noah just looks down and smiles. He’s a quiet guy. “You hungry, Rooster? My wife is cooking. Wouldn’t mind a guest.” I ended up staying with Noah for a week, just tutting and scuttling around the house and the yard, trying not to scratch anything up too bad. My other assignment can wait…