Humiliating women in The Philadelphia Story. 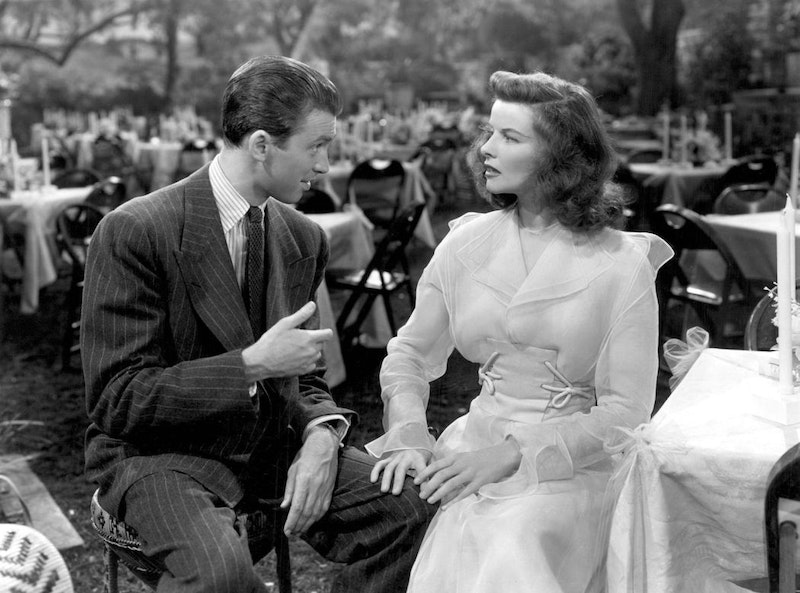 This is part of a series on screwball comedies. The previous essay on Monkey Business, is here.

The women in screwball comedies don't need men. That's a big part of what makes the genre distinct. But it also, not infrequently, leads to a certain amount of anxiety. That's the case in George Cukor's much-lauded 1940 film The Philadelphia Story.

The Philadelphia Story is acclaimed as one of the greatest romantic comedies of all time. Part of its celebrity is no doubt due to its having two big-name leading men; Cary Grant and Jimmy Stewart. But the script puts its female lead squarely at its center. Katherine Hepburn plays Tracy Samantha Lord, a wealthy Philadelphia socialite who divorced her former husband, C.K. Dexter Haven (Grant), for being an alcoholic. She's about to marry a former miner and rising politician George Kittredge (John Howard).

The film is in no small part about celebrating Tracy's remorseless wit, which is also Hepburn's remorseless wit. The opening scene shows Tracy deliberately and disdainfully snapping one of Dexter's golf clubs—a gleefully executed castration metaphor. In her first conversation with Mike Connor (Stewart), a journalist who’s trying to sneak into her wedding for the gossip magazine Spy, she deftly puts him on the spot. She sends her little sister in to pantomime gracious French matters, and then grills Mike and his photographer Liz (Ruth Hussey) so thoroughly that Mike squawks at the end, "Who's interviewing who?"

The Philadelphia Story is in love with Tracy. But it also hates her. Her indomitability and self-sufficiency—the fact that she knows what she wants, and doesn't suffer fools gladly—is admirable and funny, but it's a threat as well. Tracy is too noble (she's a "lord" after all), and for that crime the film sets about humiliating her. First Dexter sneers at her for setting her standards too high—for being bronze, "chaste and virginal." ("Stop using those foul words," Tracy snaps.) He says she should’ve been more forgiving of his alcoholism.

Shortly thereafter, Tracy's father, Seth Lord (John Halliday), reiterates the accusation that Tracy is too hard-hearted and snooty, and blames her for his own infidelity. He just had a fling with a dancer in New York, and Tracy is understandably pissed at him for betraying her mother. But he refuses to apologize, and aloofly declares that if Tracy had been a more dutiful daughter, he wouldn't have strayed.  It's common for adulterous men to blame their behavior on their wives, but to target one's daughter is an innovative and repulsive twist.

The film doesn't see Seth as repulsive, though. On the contrary, Seth and Dexter are supposedly teaching Tracey an important lesson. She needs to be kinder, more understanding, less exacting, and overall more womanly. You can see the lesson working on her when George tells her that no one will ever be her "lord and master." She becomes visibly upset. "I don't want to be worshipped. I want to be loved!" she says—and to be loved for a woman, in the logic of the film, means that Tracy must take someone else as her superior.

These conversations lead Tracy to some serious soul searching, accompanied by some serious drinking. She ends up on the night before her wedding sharing a kiss or two and a midnight swim with the similarly inebriated Mike—who she notably chastises for being too high and mighty and snobbish. In the cold light of dawn, she barely remembers what she has done, and is ashamed and horrified because she assumes she slept with Mike. Her fiancé George dumps her, and having been shown her place, she’s now ready to grovel before her father and remarry Dexter. Happy ending.

If the moral of the story isn't sufficiently clear, the film underlines it in a subplot. Mike and Liz are sort of a couple; they aren't married, but have an understanding that they’ll tie the knot some day. Liz is a photographer, but also a painter of some skill, who does journalism in order to make a living. "Would I change places with Tracy Samantha Lord for all her wealth and beauty?" Liz muses. "Oh boy, just ask me!"

She may envy Tracy, but Liz is also a self-sufficient woman in her way. She’s single, has a career, and a sardonic tongue. When she’s searching for a drunken Mike, she comments, and not exactly affectionately, “Where's my wandering parakeet?" She doesn't have Lord's wealth and beauty, but she's formidable in her own way. And in its own way, the film takes care to put her in her place. Mike not only shares a kiss or two with Tracy; he actually proposes to marry her after George abandons her, while Liz is standing there.

Tracy turns him down in part, she says, because, "Liz wouldn't like it." The film rushes off to its conclusion, and you never get to see exactly what Liz thinks. But you have to wonder why smart, talented Liz is willing to put up with this jerk who actually proposes marriage on the spur of the moment to someone else.

Liz sticks with Mike for the same reason that Tracy goes back to Dexter despite his insults, and forgives her father even though he's a philanderer. The Philadelphia Story likes strong, independent women—but it likes them most when they’re setting their strength and independence aside at the behest of some guy. Women with power lead to screwball zaniness. That zaniness is fun. But it's also a problem. To resolve it, you have to restore a patriarchal order in which women, to be women, can't be lords.