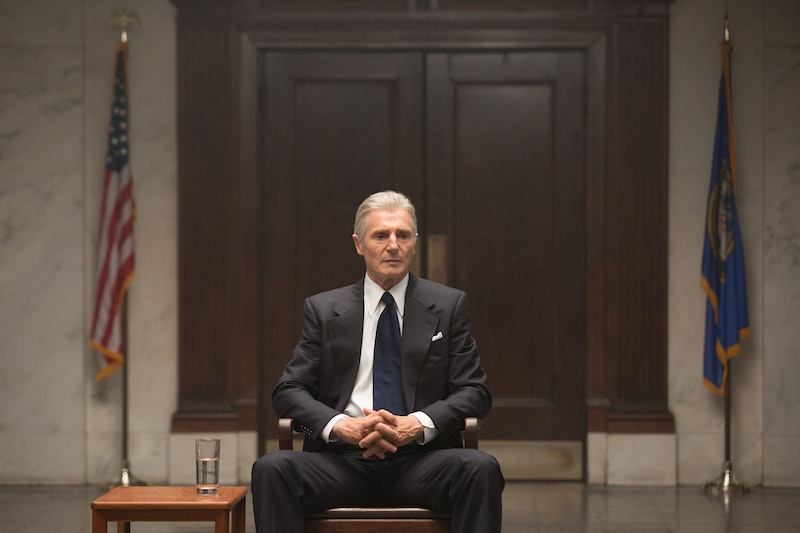 The question of the identity of Deep Throat, the famed Watergate source for Bob Woodward and Carl Bernstein, captivated Americans for three decades. Now that we know that Deep Throat was Mark Felt, the former deputy director of the FBI, we have a new movie that tells the Watergate tale from Felt’s point of view.

Mark Felt: The Man Who Brought Down the White House, starring Liam Neeson as Felt, doesn’t add a lot to the Watergate movie canon or to the understanding of Watergate in general, nor does it have much of a read on Felt the man. It’s entertaining, just because it’s a fascinating true story that’s hard to screw up. But it won’t make anyone forget All the President’s Men—or, for that matter, Nixon or Dick.

The film, based in part on Felt’s memoirs, covers about two years, between the death of J. Edgar Hoover in early-1972, through the Watergate break-in, the major events of the scandal, and Nixon’s eventual resignation. Most of the 103-minute running time is taken up by Felt wanting to succeed Hoover, not getting the job, feuding with Nixon’s stooge FBI director L. Patrick Gray (Martin Csokas), and eventually deciding to leak damning information to the press.

A lot goes wrong here. And that starts with the film not quite conveying what type of person Felt was. We’re told he’s an honorable public servant and a man of conscience, but also that he was complicit in decades of abuses committed by Hoover. He’s by-the-book, except for doing extralegal stuff when going after the Weather Underground.

A subplot involving Felt and his alcoholic wife (Diane Lane) trying to rescue their runaway daughter from a hippie commune seems to be included for no reason but to let him off the hook for the Weather Underground stuff, for which Felt was eventually convicted and later pardoned. That, and we know how much audiences love to watch Liam Neeson rescue his daughter.

The film also leaves out what I consider the most interesting part of the Mark Felt story—how he kept the Deep Throat secret for over 30 years. Why not tell the story of Felt’s decision, in his 90s, to finally come forward? Hal Holbrook is both still alive and the exact right age—he could’ve played Deep Throat one more time.

All The President’s Men’s shadow hangs over this film, and the filmmakers handle that by deemphasizing Felt’s relationship with Bob Woodward and giving him additional scenes with a different reporter, Time’s Sandy Smith (played by Bruce Greenwood). And there are also various elements—the firing of an FBI director, rampant leaks to the press, a spiraling scandal that may implicate the White House—that clearly echo various Trump-related scandals and controversies.

The cast has a lot of strong actors as Felt’s various FBI underlings, including Josh Lucas, Tony Goldwyn, Brian D’Arcy James, and even Ike Barinholtz in a rare dramatic role, while Tom Sizemore oozes sleaze as longtime Hoover bagman (and Felt antagonist) Bill Sullivan. But Csokas, as Gray, is practically a mustache-twirling villain. Most of the characters are attempting some version of an old-line WASP accent (Michael C. Hall’s, as John Dean, is particularly luxurious) but Csokas just sounds goofy.

Peter Landesman is the writer/director, who specializes in fact-based prestige stories that don’t end up nearly as interesting as they should be. Landesman, an ex-journalist, previously directed Parkland, probably the most boring movie ever made about the JFK assassination. His 2015 take on the NFL concussion crisis, Concussion, is memorable mostly for Will Smith’s iffy African accent, questionable action scenes, and the puzzling decision to end nearly every single scene with a sudden pan into Pittsburgh’s Heinz Field. He continues that tradition here, with unnecessarily repeated close-ups of just about every monument in Washington, DC.