The Death of the Screwball Comedy 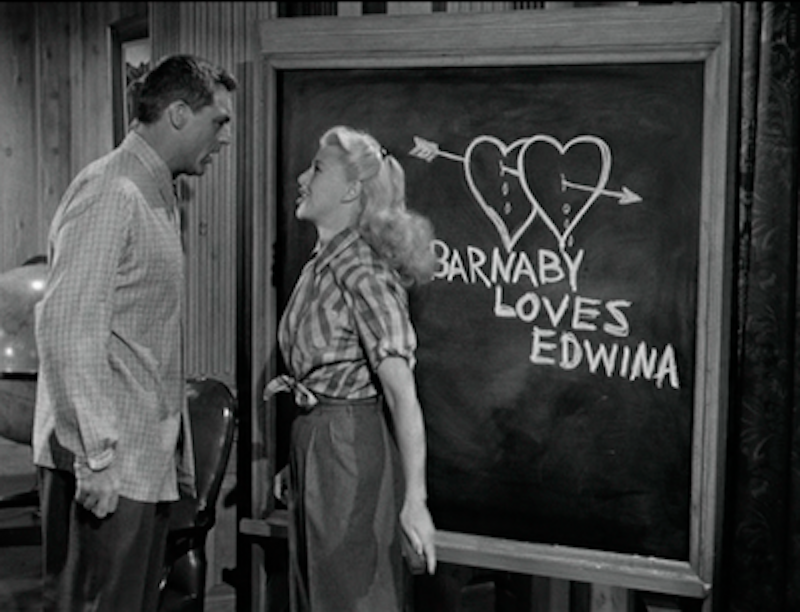 This is part of a series on screwball comedies. The previous essay on The Lady Eve, is here.

Monkey Business was released in 1952, years after the screwball comedy's heyday. Directed by Howard Hawks, one of the genre's greatest directors, and starring Cary Grant, the biggest star, its screwball comedy bona fides are undeniable. And yet, the film is in many ways a repudiation of screwball comedy—or at least an acknowledgement that, despite Hawks' nostalgia for an earlier time, by the 1950s it had outlived its era.

Classic screwball comedies were built around independent, forceful women and the men they steamrolled, or tried to. Grant as absent-minded chemist Dr. Barnaby Fulton is a throwback to his much-beloved screwball role as an absent-minded paleontologist in Bringing Up Baby. The opening credits scene, in which Hawks via voiceover, tells the actor "Not yet, Cary," as the actor absent-mindedly opens a door, plays on the familiarity of the role. The audience knows Grant's character before Barnaby is introduced, because Grant has played the hapless leading guy before.

Grant's wife, Edwina Fulton (Ginger Rodgers) is a different story. Edwina is more competent and together than Barnaby; the first scene has her trying to get him organized so they can go out on the town. But the interaction isn't competitive, as in many a screwball comedy before. Edwina isn't a zany firebrand or a manipulative schemer. She's a doting, motherly wife. Rather than taking advantage of Barnaby's cluelessness, she indulges it. At the end of the first scene, in fact, he casts aside his ditziness, and proposes sex, which Edwina eagerly accepts. Screwball comedies of the 1930s and 40s were all about a battle of the sexes, but there's no battle here—just some domestic sitcom silliness, resolving into comfortable domestic bliss, with the man on top.

Before the war, Hollywood was more willing to show independent women; by the 1950s, traditional gender roles had reasserted themselves. Women weren't allowed to be strong-willed characters with their own agendas, which undermined the central plot and themes of the screwball comedy. Barnaby and Edwina are married, and in the logic of the 50s, married couples do not have conflicts. So what can the film be about?

Hawks has a clever answer: the film is about regressing to a time when screwball comedies were possible. Barnaby, the genius chemist, is working on a formula that will cause people to become younger. Thanks to the intervention of a chimp symbolically named Eve, he succeeds, and the water cooler in the laboratory becomes a fountain of youth. Suddenly, Barnaby is getting his hair cut in a slick style, buying fast cars, and canoodling with young breathy secretary Miss Laurel (played by Marilyn Monroe.)

It's when Edwina drinks the youth serum, though, that the film really becomes a screwball comedy. Suddenly, the boring, mothering Edwina is dropping fish into the pants of elderly corporate executives and pulling Barnaby onto the dance floor to boogie till the wee hours. Ginger Rogers is gleeful as she shucks off the role of understanding housewife, lets her hair down, and vindictively locks Barnaby out of their hotel suite in his bathrobe.

Edwina is angry with Barnaby because she's jealous at his attraction to Miss Laurel—or perhaps because he's not nice enough to her mother? The motivation is somewhat opaque. But it's possible to read her resentment as a comment on the conditions that have undermined the screwball comedy. Barnaby casually mentions that Edwina as a young woman was a scientist herself, interested in ichthyology. He thinks it's natural that she should’ve given up her intellectual pursuits to bustle around after him keeping track of his house keys and his glasses. But Edwina has some doubts about her lot in life. She says she drinks the formula because it'll be more scientific for her husband to observe her rather than the reverse, but she's also looking forward to a chance to get out of the limited 50s housewife role, and regress, if only for a little bit, to a more assertive screwball era.

The film plays with releasing Edwina from her role as dutiful wife; it also tip-toes around her role as mother. Leading women in screwball comedies almost never have children. The joke of the title Bringing Up Baby is that Katherine Hepburn wrangles leopards rather than kids. Edwina doesn't have children either—but in the 1950s this is a more notable, and disturbing omission. As one spunky child asks accusingly towards the end of the film, "Don't you like children, mister?"

Edwina does obtain a baby. Through one of those screwball misunderstandings, she finds an infant that she believes is Barnaby regressed into childhood. Distressed, she gets a cab to race to the lab in hopes that scientists there can reverse the formula. In the taxi, she tells the baby, "Barnaby, I'm your wife!" causing the cab driver to sit up as if he's swallowed his gum. Edwina can't tell her husband from an infant—a wry comment perhaps, on the way in which Hollywood in the 50s expects women to treat their men like wayward charges, rather than challenging them as fellow adults.

By the end of the film, everything is back in order. Edwina returns to her pattern of satisfying deferential indulgence, while Barnaby’s the bumbling, lovable breadwinner. "I'm beginning to wonder if being young is all it's cracked up to be," he declares. “We dream of youth. We remember it as a time of nightingales and valentines. But what are the facts? Maladjustment, near-idiocy, and a series of low comedy disasters. That's what youth is." Being young, he tells Edwina, isn't a matter of an anti-aging formula; it's all about staying young at heart. She nods and smiles at this banality, because nodding and smiling are what women in Hollywood in the 50s are supposed to do. The formidable women of the screwball comedy are gone—and they haven't really returned, even 65 years later. Romances driven primarily by smart, funny and intelligent women are still vanishingly small on the big screen. Just 10 years after the golden age of the genre, women like Vivian in Bringing Up Baby or Jean in The Lady Eve had become such impossible figments that Hawks needed to invent the fountain of youth to bring them back for a brief, immediately disavowed encore.