Chadwick Boseman’s excellent as Thurgood Marshall, though. B 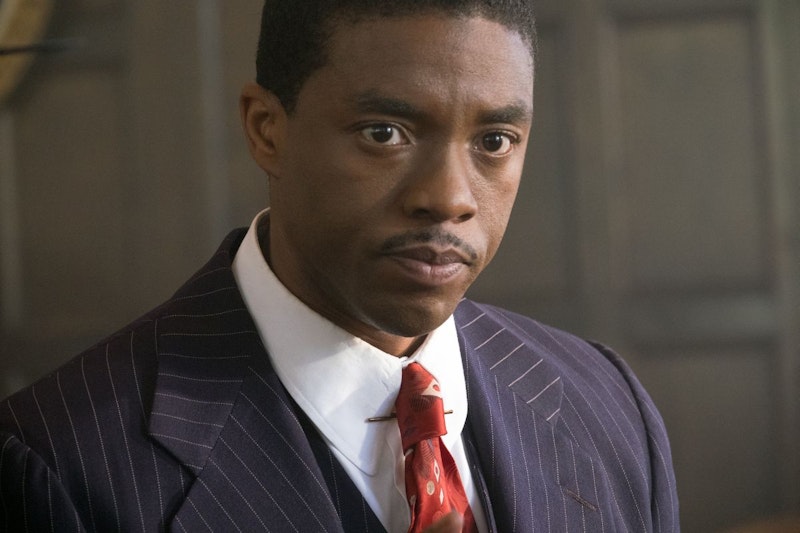 The new historical drama Marshall functions fine as a legal drama and as something of a hero origin story for the legendary lawyer and future Supreme Court liberal lion Thurgood Marshall. It’s got Chadwick Boseman’s best performance, in his seemingly never-ending procession of biopics of African-American icons. It’s a well-told story that looks great on screen and is full of strong performances. I’m just not sure why this particular story, of all of the cases and stories from throughout Marshall’s life and career, was the best choice for a movie.

Marshall, directed by Reginald Hudlin, dramatizes one of the young Marshall’s first big cases as a lawyer: It’s 1940, in Greenwich, Connecticut, and in a To Kill a Mockingbird-like case, a black man named Joseph Spell (Sterling K. Brown) is accused of raping a wealthy white woman (Kate Hudson), for whom he works as a driver. Marshall is sent by the NAACP to defend Spell.

But the twist is, because Marshall isn’t licensed to practice law in Connecticut, the officious, hostile judge (James Cromwell) orders that he must act only as silent co-counsel—he can sit at the defense table, but he’s not allowed to speak out loud in court. So Marshall acts as Cyrano de Bergerac to unprepared lead counsel Sam Friedman (Josh Gad), an insurance lawyer who’s never tried a criminal case before.

Meanwhile, there’s under-the-radar prejudice and violent racial intimidation that’s often associated with the Deep South during the civil rights era; between Marshall and Get Out, 2017’s been a big a year for movies that show the North can be pretty damned racist too.

Boseman is fantastic as Marshall, playing him with charisma to burn and a huge swagger. He may not look all that much like the real name, but I was convinced early on. He also, of course, played Jackie Robinson in 42 and James Brown in Get on Up, but this is the most convincing, lived-in performance of the three. His interplay and relationship with Gad is affecting at times, but I kept wishing Boseman-as-Marshall could get the kind of huge courtroom speech that the movie (and of course, real life) denied him, although there is a great in-court moment that recalls O.J. Simpson trying on the glove.

Gad acquits himself well, even if the role is getting to be a cliché—the real-life Jewish lawyer, played by a comedian, who plays a supporting part in a real civil rights drama. Nick Kroll did the same thing in Loving last year. Still, one of the film’s best and most surprising scenes takes place in Gad’s synagogue.

Much as Marshall has to offer, I can’t help but wonder why Boseman couldn’t have starred in a movie, set in another part of Marshall’s career, in which he was actually able to show his talents in the courtroom. Perhaps there’ll be a sequel. Or, with the news of an upcoming Ruth Bader Ginsburg biopic, we’ll have the Liberal Supreme Court Justice Extended Cinematic Universe.

Professor Marston and the Wonder Women Is Fast-Paced and Entertaining. B+

The new Professor Marston and the Wonder Women is of a piece with a mini-genre that had a bit of a heyday in the late-1980s and early '90s—The Surprisingly Sexy Backstory Behind a Literary Sensation; Henry & June was probably the most famous example.

The twist with Professor Marston is that the “literary sensation” was the original Wonder Woman comics, which the film suggests were spawned by a combination of unconventional academic philosophy, earnest early feminism and sexuality inflected with polyamory and S&M. Written and directed by Angela Robinson, the film is not only a fast-paced, entertaining exploration of a rarely explored corner of pop culture history, but it’s also a shockingly frank look at sexuality, even by American indie film standards.

Professor Marston and the Wonder Women begins in the 1930s, with Dr. William Moulton Marston (Luke Evans) teaching at Radcliffe College, alongside his brash wife Elizabeth (Rebecca Hall). When they meet comely undergrad Olivia Byrne (Bella Heathcote), it awakens surprising feelings in all of them. The three of them eventually settle into an unconventional long-term relationship, inspiring Marston’s creation of the Wonder Woman character (as “Charles Moulton”) in 1941.

It’s a great story, even if you don’t know or care that much about Wonder Woman. The film, gorgeously photographed and handsomely staged, has a lot of fun putting together the pieces of Marston’s Wonder Woman idea—first the theory, then the costume, and eventually the inferences to bondage. Evans has always been something of a human Ken Doll as an actor, a version of Disney’s Gaston even before he actually played the part in this year’s Beauty and the Beast, but this is his most layered performance. The film, though, belongs to Rebecca Hall, in a career-best performance as a beautifully multifaceted character.

Just a few elements of the film don’t quite work. There’s a framing device, with Marston interrogated by a Legion of Decency type (Connie Britton) that keeps interrupting the momentum. The film doesn’t give much credit to any of the illustrators who worked on Wonder Woman’s early days. And this is one of those biopics that shows a reel of the real people at the end, making it clear that the actors playing them were significantly better-looking than their real-life counterparts.

Professor Marston and the Wonder Women likely owes its existence to the superhero explosion generally and this year’s hit Wonder Woman movie specifically. And at a time when toxic male nerd entitlement repeatedly asserts itself in superhero fandom, it’s refreshing to know one superhero had such explicitly feminist origins.