What Does Michael Corleone Do All Day? 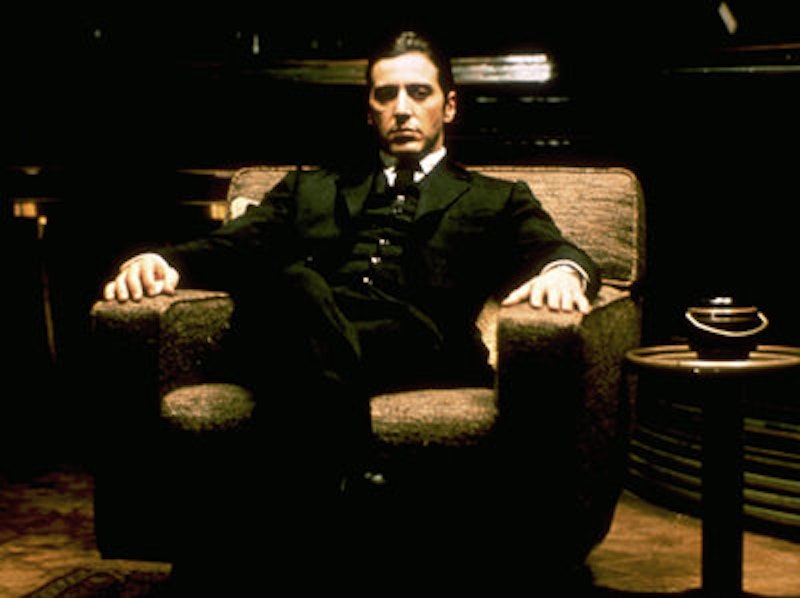 Batman hits people. Sherlock Holmes gets down on his knees and looks at clues. But Michael and Vito sit there. Out of all the great pop culture properties, only The Godfather (and II, of course) would have action figures of the heroes sitting and listening. To be fair, Kirk and Picard can be found in their captain chairs, but they look like they’re going to get up again. Michael and Vito settle into their chairs. They’re where they’re supposed to be. Like their men, the Corleones can kill when necessary, but that was early in their careers. Their glory is to sit at the center of an organization, to take in what others have to say, and to issue the correct orders. That’s why the fans love them.

The movies gloat over their heroes’ brainpower. Yet the heroes don’t really have to think. “I always thought it would have been Clemenza, not Tessio,” says Tom Hagen. Michael corrects him. “It’s the smart move,” Michael says. “Tessio was always smarter.” If Tessio is so smart, why is he getting killed nine minutes later? So it goes in The Godfather, with high, low and in-between: Don Barzini, that punk Paulie and decent old Tessio. Paulie calls in sick the day Vito Corleone is ambushed, and that means he’s a traitor and knew the hit was coming. Barzini makes the peace between Vito Corleone and Don Tattaglia, and that means he’s secretly in league with Tattaglia and calling the shots. Poor Tessio leans down to Michael and says Barzini asked him to ask Michael for a meeting, and right away Michael knows Tessio’s setting him up. After all, Don Vito had told Michael: whoever comes to you about the meeting, he’s the traitor. Don Vito just knew.

By Godfather precedent, Tessio would have to be dumb to try what he does, as dumb as Paulie. Barzini might be a bit smarter than Paulie, since his charade is more elaborate, but he’d still be banking on the same delusion: that nobody in The Godfather is going to think the way they usually think. Godfather logic holds that two dots always make a line, that this line will be spotted by a Corleone, and that everybody else will be scratching their balls and wondering what’s up. That’s especially so for the schemers. One after the other, some ambitious character manages to stand out in relation to a radioactive event—to an ambush, or a challenge by a don, or an attempt by the family’s top rival to get Michael near enough to be shot—and then he acts surprised when a Corleone guesses the score. The Corleone in question doesn’t have to be smart: Sonny the hot-head can guess what Paulie’s doing. And the schemer isn’t allowed to be smart: Tessio’s in the room when Sonny sees through Paulie, but five years later there’s Tessio shuffling up to Michael and trying his play. In Godfather II the process becomes even neater. How does Michael know Hyman Roth tried to kill him? Oh, he knows.

When Michael outfoxes his enemies and wins the day, it’s by giving paid specialists a list of jobs to do. He doesn’t come up with the hits or carry them out. His input is this: there’s somebody important whom I don’t like, kill him. The circumstances may be difficult, but that’s for the hitmen to deal with. The important thing is Michael really needs this done. The hitmen are like an overburdened IT department, and he’s like an executive who keeps wrecking his hard drive. But he’s the smart one! Not that the hits are so ingenious. What’s so brilliant about dressing as a cop or a tourist? The Godfather movies are about wiliness, but there’s nothing to make a scriptwriter pace the floor. The supposedly clever stuff is all gimme, all the time.

Yet the movies are beautiful. The gimmes are given so easily that they’re stripped off us. Only determined thought brings out the plot chasms. Even then the story isn’t shown up. The chasms seem like clutter: they don’t match the dream, so they hang around like the moon in daylight, wondering why they’re there. Supposedly, the Godfather movies are an adult look at reality, a Harold Robbins–style x-ray of what makes the wheels go round in our dirty world. But the heart looks at these two movies and it dreams, and everything else must fit itself around that dream. A dream that is… what? As grave as a child, as silly as a middle-aged man. The most important man in the world sits in his chair. Nobody knows what he does, not even him. But he looks across a landscape filled by people linked to his will. Everywhere is a string tied to his finger, and he pulls when he must. By himself he’d still be a hero, that’s understood. But he wouldn’t be nearly as much of a hero. He matters because he’s at the center of so many strings. And he’s alone.

There may be some reason these movies have become so popular during the age of white-collar manhood. At any rate, I know what Michael Corleone does all day. He thinks about Godfather quotes and wonders about his life. Just like the rest of us.