The Day After is both cynical and blandly sentimental. 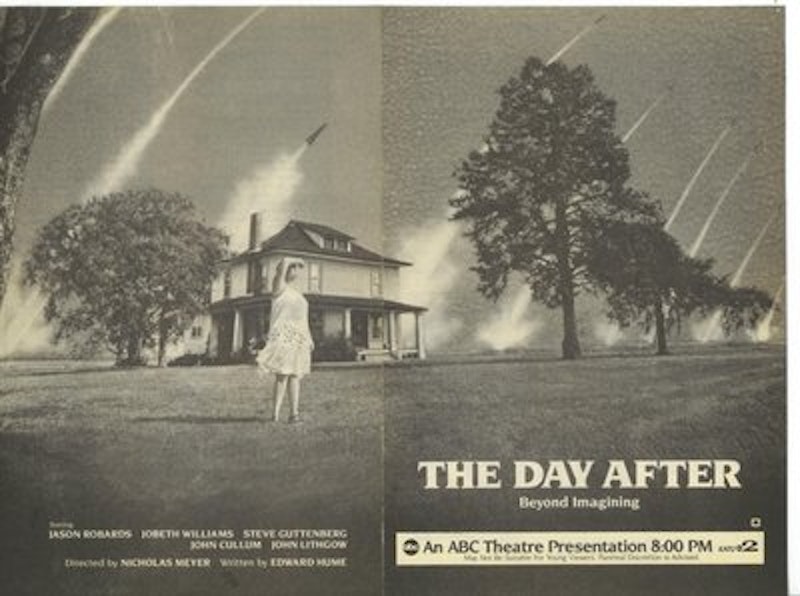 This is the 10th post in a series on political films. The ninth, on Coffy, is here.

A full-blown nuclear war would affect everybody on earth. The Day After, though, focuses on a small subset of that everybody—a very familiar subset. The 1983 television movie about the aftermath of nuclear war is set in Lawrence, Kansas, and that heartland is populated almost entirely by the sort of people you'd expect to see in such a television movie. They’re middle-class, clean-living, decent, mostly white people, who love football and their spouses with equal sincerity. Without the apocalypse, they would’ve gone on to live productive, decent, heart-warming lives. The tragedy of nuclear war, then, is that it stops the protagonists we already know from getting their proscribed happily ever after.

At least since Uncle Tom's Cabin, political art has leveraged sentimentality and respectability. Harriet Beecher Stowe focused her novel on an enslaved black woman whose skin color was indistinguishable from that of her white persecutors. The injustice, readers were told, was that horror could be visited upon someone just like them.

In the same vein, The Day After carefully focuses on people who are supposed to be normal and sympathetic. You do not see the carnage in the Soviet Union, for example, because who cares about them? Instead, the main point of identification in the film is Russell Oaks, a saintly doctor played by the comforting figure of Jason Robards. Besides him there's Eve Dahlberg (Bibi Besch) a farmer's daughter who engages in premarital sex the day before her wedding—her impulsivity is further confirmed when she becomes hysterical after a few days in the basement shelter and runs out into the fallout, sealing her doom. The film also carefully includes an African-American character, Airman First Class Billy McCoy (William Allen Young), who proves his saintliness by adopting and caring for a mute white man, with whom he staggers through the wasteland—and on out of the narrative, once he has served as sufficient testimony to post-racial harmony in the post-apocalypse.

Not everyone is a saint in The Day After; the film shows social breakdown, including rioting, looting, and violence. But they’re part of the tragedy inflicted on good people, rather than tragic points of identification themselves.

The Day After is both cynical and blandly sentimental. The filmmakers resisted censors who wanted the show to state that the Soviets fired first, and the movie's view of the U.S. government is convincingly jaded. The president, in a broadcast address following the nuclear attack, tells the country that they should be proud America has refused to surrender; faced with the end of the human race, the leader of the free world defaults to empty patriotic burble.

But even as American politicians are excoriated, Americans are saluted. In a country with all these lovely citizens, committed to right and good, how did you ever get a government willing to unleash Armageddon, anyway? It’s a mystery.

At the conclusion of the film, Dr. Oaks, grief-stricken, stands in the rubble of his home and yells at squatters to get off his land. One of the squatters, as ragged and traumatized as Oaks himself, reaches out, and comforts the other man. The bourgeois assertion of property rights dissolves into mutual recognition of suffering and virtue. The apocalypse is not so much a growth experience as a revelation that no growth experience was needed. The nuclear arms race has no possible connection to genocidal destruction of Native Americans, or a history of enslavement, or decades of imperial wars, in which the lives of innumerable people were sacrificed to abstract goals, or simple to greed. Nuclear war does not fit into an American history of violence, because there is no such history. Americans are good, and do not deserve to suffer. Therefore, they shouldn't get annihilated in a nuclear war.

In casting Americans as innocents, The Day After arguably contributes to the warmongering it seeks to confront. Americans’ inability to sympathize with people who aren't successful white doctors from Lawrence, Kansas has made it easier to drop bombs on all those in Japan, Vietnam, and Iraq who don't look like Jason Robards. The casting of Calvin Jung for the bit part of Japanese-American Dr. Sam Hachiya underlines the point. Hachiya's ethnicity is referenced as a reminder of Hiroshima, but the destruction of Kansas wipes away any discussion, or memory, of the racial impetus for the historical nuclear attack.

Yet, the truth is that couching political art in banal self-righteousness can be very effective, at least in a limited way. Ronald Reagan, who thought and felt in Hollywood memes, was deeply depressed by The Day After; many have speculated that the film may have led him to be more receptive towards Gorbachev's overtures of peace. If The Day After was more honest and courageous, Reagan probably couldn't, or wouldn't, have understood it. Reagan would only work to end the Cold War if he could do so in a way that retained the romanticism of American exceptionalism—and the ideological justification for America to continue as an imperial power. The Day After is not very good as art, but that may have made it more effective as agit-prop.