Frank Drebin is Coming to Get You

The gritty realism of Naked Gun. 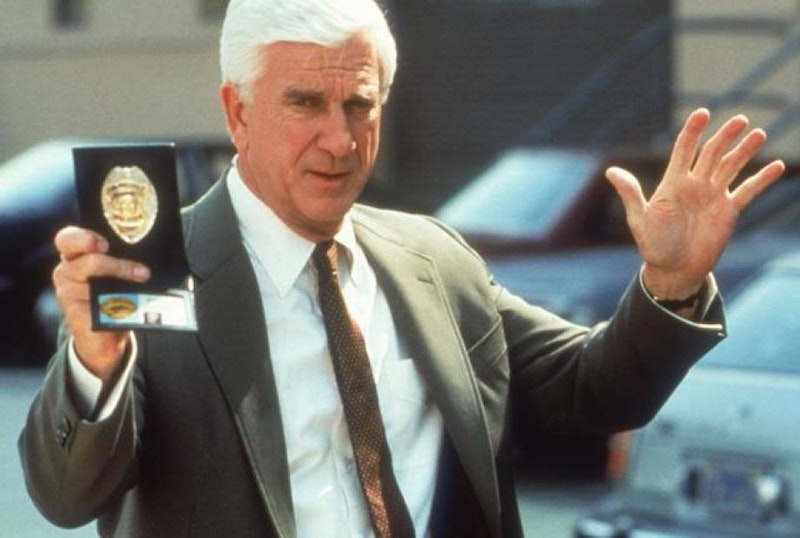 This is part of a series on 1980s comedies. The last entry on Big Trouble in Little China is here.

"To think, if I shoot someone tomorrow I could be arrested," Lt. Frank Drebin  (Leslie Nielsen) muses as he clears out his desk in Naked Gun: From the Files of Police Squad! (1988) Drebin loves being a police officer because it means he can murder with impunity. The offhand line is one of the most pointed critiques of policing I've ever seen on film.

The critique can be so pointed precisely because it's offhand; Naked Gun isn't actually an indictment of the police. Instead, the film is a broad police procedural parody with nothing in particular happening beyond getting to the next gag. As an example, in one scene, the female lead, Jane Spencer (Priscilla Presley), is climbing a ladder to rummage on an upper shelf as Drebin looks up her skirt. "Nice beaver!" he says. "Thanks!" she replies, as she hands him down a giant-stuffed beaver. Rim shot.

The film, then, is assiduously, determinedly, ruthlessly bone-dumb. But for that very reason, it’s inadvertently more realistic, and more unflinching, than the gritty police dramas it is trying to gently parody.

Police are ubiquitous onscreen. They’re perhaps the single most popular protagonists on television; every week, police, or detectives working with the police, solve more murders on TV than occur in an entire year in real life.  Television and movie cops—like those on Law & Order: SVU—are generally dedicated and competent. They may make mistakes because of their overzealous desire for justice, but they mean well. Corrupt cops are aberrations, who are brought to justice by good cops by the end of the episode—or by the end of the season at least.

Even when cops are shown to bend or break the rules, as in Luther or True Detective, their infractions are presented as part of a pursuit of evil which, whatever its flaws, is necessary. If you kill someone or rough someone up in pursuit of a serial killer, can you really be blamed? Cops sometimes do wrong, but their jobs are right; they do necessary work.

And then there's Lt. Drebin. Drebin is, in theory, engaged in a serious, worthwhile cause—he's trying to prevent the assassination of Queen Elizabeth (Jeannette Charles). But most of his actions seem designed less to protect the monarch than to terrorize the populace. Wherever he drives, he runs his car into innocent bystanders, knocking them off piers or scaffolding, or simply ramming into them. He breaks the law against warrantless searches in order to break into a suspect's home, where he accidentally sets a roomful of priceless artifacts on fire. Even in the opening credits, we see a driver's view of a police cruiser racing down wet city streets, then steering into a suburban home and forcing the residents to flee, then driving through a woman's locker-room, and finally, inevitably, pulling up to a donut shop.

The joke of Naked Gun is that Drebin is incompetent, but wins the day anyway. No matter how much destruction he causes, his buddies on the force love him. Violating the law, burning an office down, and sexually harassing a woman in her home doesn't get him prosecuted—he's just suspended. And his boss doesn't enforce that.  No matter what cops do, they don't get arrested. At the climax of the film he accidentally knocks the bad guy, played by Mexican actor Ricardo Montalban, off a balcony. The bad guy plunges to his death, and is then run over by a truck and a steamroller. Drebin's boss winces, but sometimes that's what happens to people of color who defy the cops.

Again, Frank Drebin is just a joke; neither creators nor audience are supposed to take him at seriously. As a result, he can tell the truth—which is that police are dangerous. Drebin has no accountability; he can kidnap, assault, burn, and pillage, and there are no consequences. The good he does is arbitrary and accidental; the harm is unrelenting and systemic. That's not especially funny, even if you are only allowed to say it in a comedy.