The first in a series of essays on the Hammer Dracula films. 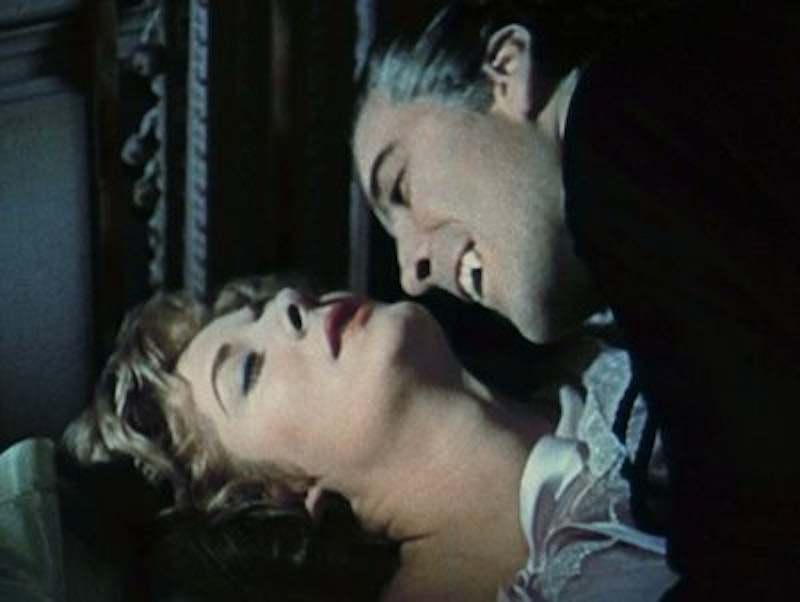 This is the first in a series on all nine of the Hammer Dracula films, in chronological order. This post focuses on the 1958 film Dracula, sometimes referred to as Horror of Dracula.

Vampires proliferate; if you've got one of those suckers hanging around, chances are you'll have two, or four, or more by sun-up. The same is true of vampire narratives. Since Bram Stoker penned Dracula in 1897, the malevolent count has stalked his way through many a gloomy, fog-cursed adaptation, from Nosferatu in 1922 to the Bela Lugosi Dracula of 1931, to Stephen King's 1975 novel Salem's Lot, on up to Francis Ford Coppola's 1992 Bram Stoker's Dracula and the 2004 goof Van Helsing.

Even by the time of Terence Fisher's 1958 Hammer horror Dracula, the titular toothsome antagonist had already lived far beyond his own day. When Dracula expired at the end of Stoker's novel, and at the conclusion of each new iteration, it was only to rise again and again, reborn anew for every era.

The visual setting of Fisher's film itself seems to confirm the vampire's status as a creature outside of time. Some clothes and furnishings date well into the 20th century; men wear modern-seeming coats and carry comfortably familiar-looking luggage. But the women are decked out in stiff confections that suggest a over-carbonated Victorian era, while many of the furnishings come from a kind of chintzy Hollywood retro-gothic, with pillars that twist too profligately in front of obviously fake stained glass. Dr. Van Helsing (Peter Cushing) uses an electric Dictaphone in one scene, throwing a servant into confusion, not because he's unfamiliar with the device, as because, given the chronal confusion, he's not sure whether he's gauchely stumbled upon an anachronism or not.

Little wonder, then, that the 1958 version of Jonathan Harker (John Van Eyssen) seems familiar with the story before the film even begins. In the original Stoker novel, Harker is an innocent, hired by Dracula on business, who uncovers the Count's vile nature only as the story unfolds. But the 1958 Harker, with the benefit of five decades of Dracula reboots, knows exactly who the Count is. Yes, Harker hopes to destroy the evil-doer. But neither he, nor we, can be surprised when things unfold as they always do, and Harker ends up as yet another Dracula copy, lying in the coffin with giant incisors in his mouth and bloodlust in his tormented soul.

The fact that Harker, despite his foreknowledge, lets himself be bitten by a bosomy Bride of Dracula (Valerie Gaunt) is part and parcel of the over-determined Dracula myth. Vampires are horror, but they’re also illicit, filthy, excitingly tempting sex. Harker is supposed to have a loving fiancé waiting for him, but when the Bride sidles up to him, under a pretense of needing his assistance, he looks smugly self-satisfied by her embrace in a way that dear Lucy (Carol Marsh) back home surely wouldn't be happy about.

Lucy herself soon joins her sweetheart in infidelity, though. After Harker's death the Count sneaks off to defile his pure lover. Soon pale, quivering Lucy is staring out of a face blank with need as the Count (Christopher Lee) enters through the open window of her bedchamber—a double entendré that barely even bothers with the double. Similarly, when Lucy's sister-in-law Mina Holmwood is bitten, the actor playing her, Melissa Stribling, engages in a masterpiece of eroticized deception. Mina practically glows as she pulls her ruff tight around her neck, mouth twisting in sinister, sexy half smile, as she assures her hapless husband Arthur (Michael Gough), that she is fine, even though any viewer can see she's just had torrid sex with her lover. The deceitful thrall just about winks conspiratorially at the camera, as she and the audience tremble together with the secret knowledge of illicit pleasure.

Everyone rushes to get bitten by Dracula because having your soul sucked out by a vampire is a metaphor for hot kinky good times, and who can resist that? But if vampires are a metaphor for sex, you could also see the sneaky, taboo vampire sex as a metaphor for narrative closure. Throughout Dracula, victims connive with the vampires to contrive their own filthy ecstasy. But they're also all contriving together to run through those familiar vampire tropes that have called wanton moviegoers to the theater, just as Lucy is called, bosom heaving in her nightgown, to the window. It's not an accident that Van Helsing and Arthur are comically inept in their efforts to prevent Dracula from having his way with, well, everyone. Why doesn't Van Helsing just sit his butt down in Lucy's room all night to make sure no one takes the protective garlic away? Why doesn't Arthur sit in the room with his own wife, rather than standing outside her window where he can't even see the vampire two-timing him? But the answer is obvious; if Van Helsing sat his butt down in that chair, or Arthur stayed with his wife, Dracula could not get at the women, and the film would end before it had gotten to its 80-minute run time.

You can see the way that director, vampire, victim, and audience all conspire to do the dirty work of narrative in perhaps the film's most famous scene, when Dracula comes through that window, framed by melodramatic orchestration and Lucy's terrified, greedy gaze.

Christopher Lee stalks across the room and around the bed, eyes fixed with obvious concupiscence, mouth open to reveal the gleaming, snarling fangs. He leans over the terrified, virginal, desiring Lucy… and then in a single, sudden thrust, he pulls up his cloak to block the camera. The actual bite, and/or the actual sex, are discreetly hidden behind a curtain. Instead of showing the sexy, terrible consummation, the film encourages you to imagine it yourself. We're all perfectly aware of what happens next, the film says. We all know how the story goes and how to replicate it. Go on, then, and complete the scene yourself in the bloody, orgasmic fashion you've come to expect.

The undead are as popular as ever; zombies are less fashion-conscious than their Transylvanian ancestors, but the lineage is still recognizable. Even beyond Stoker's particular gory tale, though, the pop landscape teems with reanimated nostalgic properties, Captain America, the Jungle Book, the X-Files, Star Wars: everything old has risen from its tomb to walk the earth again, with that glittering smile. The 1958 Dracula is about the seduction of Dracula, and how we throw wide the window to the stories we love, inviting them in to achieve their morbid, ecstatic, familiar climax. For good or ill, Hammer knows, old stories sink their teeth into us. We help them do it.