Another melodrama with noir elements, Autumn Leaves (1956) is interesting in how its two genres struggle with each other rather than blend. 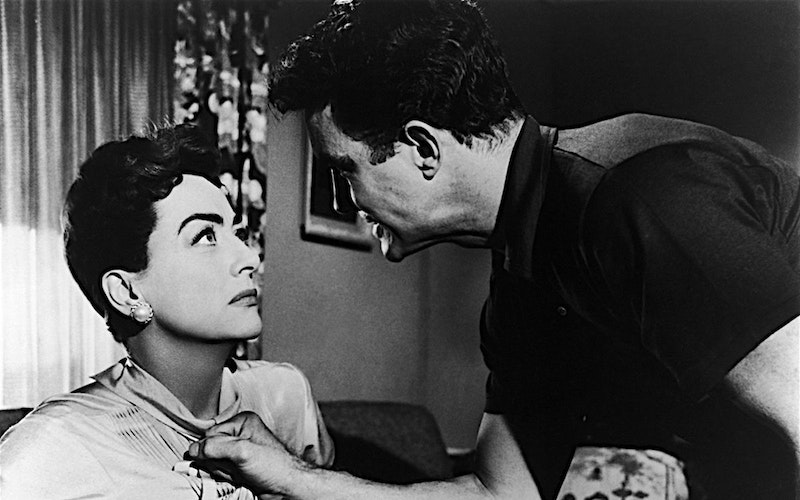 When the Criterion Channel put together its “Frame of Mind” collection of films about psychiatry, it included two Joan Crawford films: 1947's Possessed, a noir melodrama, and Autumn Leaves, from 1956. Another melodrama with noir elements, Autumn Leaves is less successful than Possessed but still interesting—for the way its two genres struggle with each other rather than blend, and the way psychiatry’s invoked not just to tie up the plot but to resolve the tensions of the film’s story.

Directed by Robert Aldrich from a script by Jean Rouverol and Hugo Butler (who, blacklisted, were credited together as “Jack Jevne”), Lewis Meltzer, and Robert Blees, it’s the story of Millie Wetherby (Crawford), a lonely typist in Los Angeles. We see her isolation, and then see her meet Burt Hanson (Cliff Robertson). The significantly younger Burt takes a romantic interest in Millie and slowly wins her. They get married in Mexico, but hints emerge that Burt’s lied about his past. Then an ex-wife (Vera Miles) Millie never knew about turns up, and tells her that the father Burt told her was dead is alive.

Millie meets the older Hanson (Lorne Greene) who proclaims he’s not a villain: “What I am we’ll… we’ll let the Gods decide.” As Millie tries to decide how far she can trust Burt we find out that Burt’s wife slept with his father, causing Burt to have a mental breakdown. We also find out the father and the ex, Virginia, are scheming to get some property left to Burt by his dead mother—but that plotline’s underplayed, and in fact the two characters disappear after Millie shouts at them toward the end of Act II.

The conclusion of the film deals with Millie’s decision to institutionalize Burt, and his therapy. There’s an interesting point made that once Burt’s mind is healed, he might no longer love Millie, as his semi-incestuous drive toward a mother-figure would be resolved. It’s a good dilemma, quickly resolved as Millie gives him to the doctors who fix Burt by zapping him with electricity.

The movie’s very well shot, though significantly more atmospheric in its nighttime scenes than its daylight moments (beyond perhaps a love scene swiped from From Here To Eternity). But it’s oddly structured. A lot of time’s spent early on setting up Millie, and if that’s not especially dramatic it works thanks to a good, if mannered, performance from Crawford. Then the love story kicks into gear, and the film looks as though it’s going to be about the tensions of a May-December romance, albeit one undermined by the lack of a real sense these characters were raised a couple decades apart from each other (the phrase “generation gap” wasn’t coined when the movie was made).

Only then the noir elements kick in. The unsettling awareness that Burt’s lying to Millie is handled well, and the surprise of his wife turning up is nice. Greene has a good oleaginous performance as the father, but the reason he’s persecuting his son is underdeveloped—we’re not clear why he and Virginia reappeared in Burt’s life. And then both of them drop out of the picture with minimal plot explanation after Millie confronts them.

The noir elements never take over the film. Instead the melodrama insists upon being front-and-center. It might’ve been better if the explanation for Virginia’s reappearance was cut down even further, and had her and Burt’s father merely as agents of fate. As it is the mystery plot isn’t integrated into the emotional story of Burt and Millie’s relationship, but more than that, working out the father’s motives gets in the way of appreciating the transgression of the incest theme.

That’s a problem because it’s a crucial subtext. Not only is Burt warped by finding his father sleeping with his wife; he’s also driven to the arms of an older woman who’s a clear mother-substitute. By marrying Millie he marries the image of his mother, and if it were this act that symbolically brings down on his head the persecutors that drove him to Millie in the first place, it’d be a neat pattern. But the noirish plot points are too obtrusive, making a purely symbolic reading difficult while being too vestigial to really shape the story.

As a result, the incest doesn’t attain the tragic status of myth, which is what it seems to strive for. Greene’s line about letting the gods decide his role feels as though it’s a glance back not just at Oedipus but pagan Greek legend in general. And yet nothing develops or amplifies the meaning of the line. There’s too much latent in the film, too much left unrealized.

Consider the film’s ending: Millie has Burt institutionalized, he’s given electroshock therapy, and then she meets him again for a happy ending in which they walk off together. Dramatically this should be underwhelming, even disjointed. But the montage of Burt’s ECT almost works as a resolution to the incest subtext. If Burt’s committed the primal sin of (symbolically) sleeping with his mother, then (also symbolically) the electroshock is his expiation. The psychiatrists are mediators with the divine powers, allowing him to pay for his crime against the gods by riddling his brain with electric fire.

On a literal level, Autumn Leaves is a clunky film whose ending is out-of-tune with the rest of the story. Symbolically, it’s strong stuff that presents psychiatrists as holy men in an unusually primal way. The movie’s problem is that the symbolic never struggles free of the literal. The plot’s too spasmodic to bring out the power of the story, which, to be fair, is strong stuff for the late-1950s. It’s a film of interesting ideas, in which a Joan Crawford melodrama strains after the heights of Greek tragedy. It fails to reach them, but the attempt’s worth noting.