A Blind Eye No More 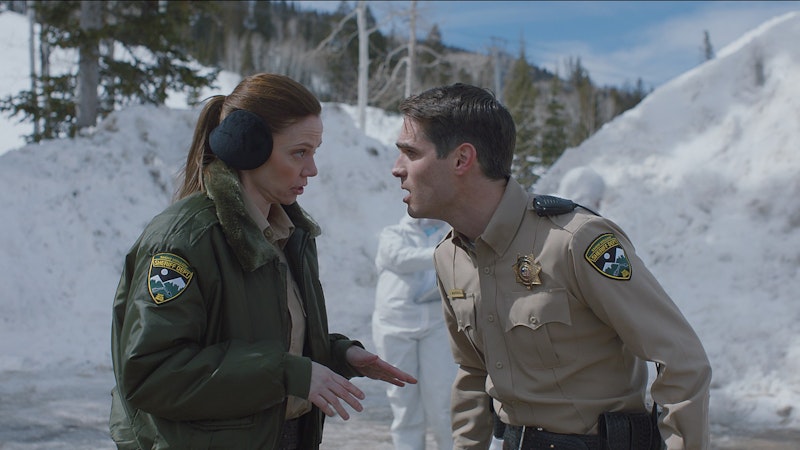 —The Wolf of Snow Hollow. Jim Cummings made a film a few years ago called Thunder Road, starring the director as a goofball small town cop trying to come to terms with his mother's death. With his follow-up, Cummings once again plays a hair-trigger cop on the edge. But the movie around him is more ambitious: it's the small town story of a serial killer on the loose, one who may or may not be a werewolf. The film expertly juggles tones ranging from gory horror to slapstick physical comedy to incisive satire, as the film's conceit that everyone in the town is mad at and distrustful of the cops landed at the perfect moment. The cast also includes Robert Forster, in his final screen performance. The mystery is far from the film's most interesting element, but this is a fantastic work from a filmmaker on the rise.

The Wolf of Snow Hollow is available for rental on VOD channels.

—Fourteen. Director Dan Sallitt's film follows the decade-long friendship between a pair of young women (Tallie Medel and Norma Kuhling.) The film, which resembles Boyhood except for all being shot at once, features one or two scenes per year over the course of a decade, and it expertly shows the ways people's lives slowly evolve throughout their 20s, with boyfriends appearing and disappearing, careers growing, and (in one of their cases) life spinning out. The film, shot in New York City and made for a reported budget in the five figures, has wonderful performances by both actresses, along with an ending that's a gut punch.

Fourteen is available for rental on iTunes.

—Driveways. This story of an elderly white veteran befriending the young Asian boy living next door sounds like Clint Eastwood’s Gran Torino, but Andrew Ahn's film is much gentler, nor does it ever erupt in shocking violence. The late Brian Dennehy, in one of his final roles, plays the old neighbor, with newcomer Lucas Jaye as the young Cody, who's living at the upstate New York home of the estranged sister of his mother (Hong Chau.)

Cody has trouble making friends with kids his own age, but develops an unlikely friendship with the older man, who takes him around the VFW to hang with his buddies (including 91-year-old Sopranos veteran Jerry Adler). It all leads up to an amazing final monologue by Dennehy, which plays like a valedictory speech for his long great career.

Driveways is available to watch on Showtime and its associated streaming channels, and also on VOD.

—Spontaneous. Director Brian Duffield's horror comedy/drama has what looks at first glance like a fun high concept: A suburban high school has a sudden outbreak of spontaneous human combustion, while a pair of survivors (Katherine Langford and Charlie Plummer) fall in love with each other amidst the chaos.

But instead of a silly horror comedy, Spontaneous takes its premise seriously, and works as an explanation of grief that's reminiscent of The Leftovers. And like that show, the film doesn’t get caught up in the “why” of the explosions. There are also elements that make it play like an accidental coronavirus allegory.

Langford—from Netflix’s bad 13 Reasons Why—is the real deal here, and she's going to be a star. Plummer is also good as a character who, between his haircut and movie tastes, seems to have been lifted out of 1975.

Spontaneous is available on iTunes and other VOD channels.

—Wendy. Director Benh Zeitlin made Beasts of the Southern Wild back in 2012, and it was one of the most acclaimed debut films of the last decade. Eight years later, he finally returned with his follow-up, Wendy, a riff on the Peter Pan legend with children in the present day. Wendy got a frosty reception at Sundance, had a blink-and-you'll-miss-it theatrical release on the eve of the pandemic, and then sank out of sight. But the movie is wonderful. It's got a spirit that recalls Spike Jonze's adaptation of Where the World Things Are. It’s another film from Zeitlin about kids roaming free in the South, although this time they’re on land. The cinematography is beautiful, and there are fine turns from Devin France in the title role, and Yashua Mack as the Peter Pan figure.

Wendy is available to stream on HBO Max.