Mario Puzo’s The Godfather: The Death of Michael Corleone is okay, but there’s no amount of re-editing that can fix Sofia Coppola’s awful performance. C- 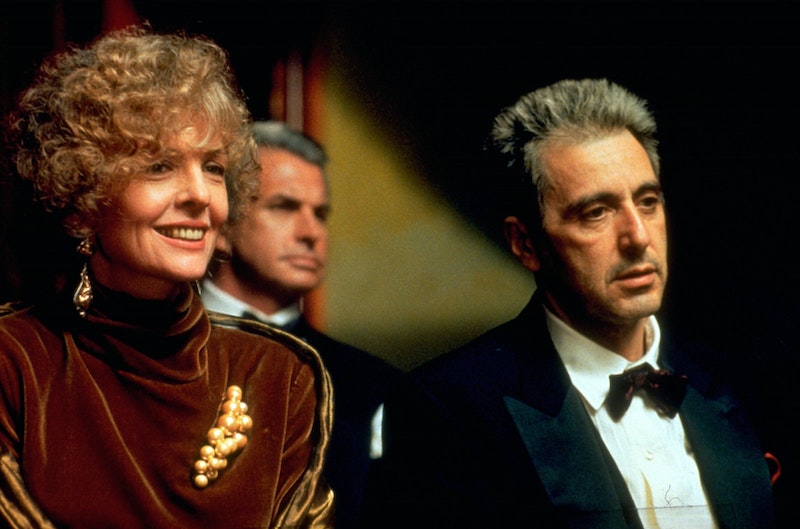 30 years ago, the last Godfather sequel dropped stillborn onto a public that couldn't wait for it but didn’t want to talk about it afterwards. All I’ve ever heard about The Godfather: Part III is how awful it is, how terrible Sofia Coppola is in it, how convoluted and disappointing a denouement it was. Too much time had passed, expectations were sky high and impossible to scale, much less top. Even casting Winona Ryder in the part Coppola eventually played wouldn’t have stopped the stream of lukewarm notices and shrugs from a culture that, only 15 years earlier, almost stopped up the New York City sewage system during the only bathroom break in the first Godfather’s television premiere.

There was no incentive to seek out Part III, unless you were a Coppola or Puzo completist (are there any?) or morbidly curious about high-profile flops. Too many movies to watch, too many “classics” to get to that stretch well past Part III’s 162 minutes (slimmer than Part I by 15 minutes and Part II by 38), and the Lord hasn’t given us enough hours in the day to collect masterpieces and dog shit, and so we must choose what we do with our time.

Francis Ford Coppola has saved the day (?) I guess with his new cut of the final Godfather film: Mario Puzo’s The Godfather: The Death of Michael Corleone. The original subtitle has been restored, and the movie’s been cut up and re-sequenced to clear things up. In a recent interview on CBS This Morning, Coppola said, "If an audience does not understand what is going on, it is very hard for them to be emotional about it.”

He added that he believes his new cut—four minutes shorter than the 1990 version—“vindicates” his daughter Sofia’s performance as Mary Corleone. At this, I can only brush my chin and look away. He’s wrong: Sofia Coppola is awful in Part III, and no amount of re-editing or re-sequencing or “reimagining” is going to fix her atrocious line readings (most of them obviously dubbed). She brings down every scene she’s in, especially with Andy García, playing her cousin and future Don, Vincent Corleone. Somehow, I never heard about their incest subplot—like a lot of pop culture from 1990, so much of Part III was lost to time.

Not a good film, but not a bad either: Pacino gives a fine performance as a dying, regretful, and occasionally raging Michael Corleone, so much better than the “personality” performances he turned to around this time, like 1996’s City Hall. His performance in Heat the previous year is among his best, but it’s one-note. He’s transitioned fully from the Kermit-throated delivery of his youth that last at least through 1980’s Cruising into the shouty-Pacino I’ve grown up seeing on the screen.

Pacino’s Michael Corleone doesn’t die in the movie, nor is his death suggested at the end. He’s condemned to spend the rest of his life alone in Palermo, his daughter dead and his family and friends all (presumably) estranged. There’s nothing in those last two shots but sunshine, two dogs, and an old man in black who’s been pummeled and turned into coal. He’s alive, but he’ll never live again.

This is a good epilogue to the first two Godfather movies. Without having seen the confusing 1990 cut, and without any of the impossible expectations of a popular audience 30 years ago, Coppola’s new version does vindicate it in some major ways: most of the major players return, and they’re all fine—Pacino, Diane Keaton, Talia Shire, and Eli Wallach aren’t left hung out to dry by bad material as I always assumed. The plot isn’t hard to follow, and according to my dad, the Vatican subplot has been reduced and clarified (“It still sucks,” he said, but after only seeing this movie once 30 years ago, he could still notice the changes).

Gordon Willis returns as Director of Photography, and his work is what makes this more than just passable: the darkness returns, but here there are even more golds and bright browns, maybe mirroring the nouveau riche look propped by Donald Trump around this time (but a decade before the film’s late-1970s/early-1980s setting, although these movies are notoriously slippery with their internal chronology).

Bridget Fonda is nice in a role that’s too small (two or three scenes), and Andy García does a decent job as Sonny Corleone’s son. Again, as with Pacino, you see García trying things here he would prove too conservative to try again in the course of his career, particularly the sudden outbursts that are a total James Caan study. He works as a tin don in over his head, the last Corleone dying a thousand deaths by losing the ones around him violently through his own choices. When Mary falls dead in yet another in an endless series of mafia hits at the very end, García doesn’t mug or play it off—he’s as freaked out and useless as Sonny would’ve been, and in these intense moments, he suddenly snaps into Caanisms.

The only performance that’s bad is Sofia Coppola’s. Other than that, The Godfather: Part III—or, in 2020, Mario Puzo’s The Godfather: The Death of Michael Corleone—is okay. As a Christmas night movie at home, with criticism and consensus three decades past, it’s an interesting coda to the first two and worth watching for those that love those movies and have never bothered with anything else in the Puzo Expanded Universe. But as a sequel 16 years in the making to two of the most successful and cherished American films of the 20th century? I see what they mean.

In his review for Variety, Owen Gleiberman wrote that he happened to watch Part III over the summer for the first time since 1990 and before Coppola's new cut was announced. In his review, he claims that almost nothing is different except for different opening and closing scenes. Some music cues and other bits have been moved around, maybe, but in essence, he says, "it's the same damn movie." But he also comes to Sofia Coppola's defense, writing: "It was obvious that she wasn’t a trained actress, yet her ripe sensuality and slightly dazed ordinary-girl inflections had a vividness that came across as authentic. The movie was saying that this—a girl who was clearly a product of the media age—is what a mobster’s daughter might look like [...] What happened is that she showed up and gave a technically unpolished, emotionally alive performance, and for that crime she was bashed like a Kardashian on Twitter."

Besides the hopelessly dated Kardashian reference, Gleiberman is in outer space. "Ripe sensuality" never enters the picture with Sofia Coppola as Mary Corleone. I don't want to be mean, but the amount of apologia out now is an over-correction to the blown out disappointment and obvious scapegoating of 1990. No, Coppola didn't deserve half of what was written or said about her performance in The Godfather: Part III, but let's not get carried away. It's not good, it's not even okay: it's bad, and so bad it nearly sinks the movie. Without the weight of 16 years of expectations, the final Godfather film is simply mediocre.

I want to know what Winona thinks. If she played Mary, this movie wouldn’t be an infamous failure. It’d be a footnote, like The Two Jakes or Texasville, neither bad nor good, never exceeding expectations they never set out to meet, much less exceed.