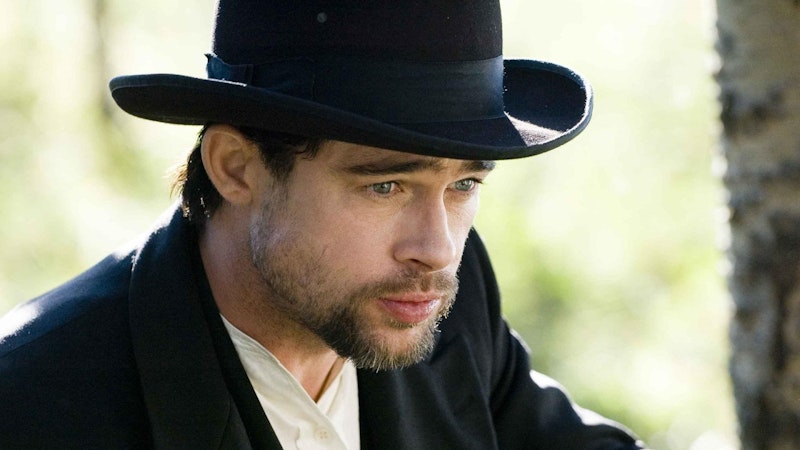 According to Andrew Dominik, the coward Robert Ford once cornered Jesse James’s brother, Frank, at a campsite in the woods. “I honestly believe I’m destined for great things, Mr. James,” Ford tells Frank. “I’ve got qualities that don’t come shining through right at the outset.”

“You may as well quench your mind of it,” Frank replies, on the subject of becoming an outlaw. “You don’t have the ingredients.” He’s right, naturally. Ford is a nuisance, on his best days; he’s awkward, conspicuous, and a prisoner of his own reflections. Eventually he becomes a despicable traitor. But when you go back to that inexorable formula for answers, you come up short. What does it mean to have an outlaw’s disposition, anyway? What is it about two men, standing side by side, that makes us want to measure them up and calculate who’s inferior to whom, and by how much?

It’s not an exaggeration to say that the headache known as “equality” begins with the assertion that all men are created equal, a pinnacle of moral vision that sometimes stings or baffles those of us in the trenches. Was Robert Ford created as an equal to Jesse James, the handsome brother, the gregarious one, with his manic delights and his storms of violence? Everything about Ford is ersatz, almost laughable, but something in us comprehends the petition he delivers to his comic strip idols. We understand his demand for an audition, but whether we understand it or not is also irrelevant. Even if he wanted to, Jesse James couldn’t bottle the lightning inside him; throughout all of Dominik’s beautiful and mournful film The Assassination of Jesse James, James is really the victim of the legend that shines recklessly out from everything he does. His legend grows around him like a strangler fig; ultimately, James is whittled down to the pure and simple craving to be dead.

The burden of seeming perfect to others, and meanwhile finding no outlet or avenue for one’s own authentic self, is the story Brad Pitt’s movies tell over and over again. It’s the reason why Pitt has never been convincing as anything but an American. (I’m going to ignore goofy pieces of trash, like Snatch, in trying to make sense of his legacy.) Pitt’s always a careful craftsman where others are crass and lazy; he gets up earlier than the others to go fly-fishing, in A River Runs Through It, and he’s the lone gangster in Killing Them Softly who admits to being brutal. He has that abundant strength that carries the ubermensch, by virtue of his own exceptionality, out to the farthest margins of society. In Legends of the Fall, and again in A River Runs Through It, Pitt’s men buck convention by settling down with a Native-American woman. His sympathy with the aboriginal inhabitants of stolen lands is juxtaposed with the celluloid world of tawdry illusions: the brother campaigning for office, the boyfriend from Hollywood, and the greasepaint stage where Robert Ford winds up, pantomiming what it feels like to murder Jesse James.

Pitt can never integrate himself properly: in Legends of the Fall he runs afoul of a bootlegging mafia, and in A River Runs Through It he gets in too deep at a card game. Why he is compelled to run headlong into the jaws of such sleepless, unforgiving powers is never explained. Maybe he has a drinking problem; maybe he doesn’t take life seriously enough. The movies toss us these red herrings deliberately; meanwhile, the tragic argument between Pitt’s grinning giants and the Lilliputian world of the real America is a story these men can only tell through the spectacle of their failure. To succeed as a soldier, in Legends of the Fall, would mean endorsing the war; to succeed as a newspaperman, in A River Runs Through It, would mean stooping to glibness.

Even when Pitt’s character Jackie Cogan seems to have won out, in Killing Them Softly, he’s really bereft: his bridges are all burned, and he’s orphaned by his scrupulous integrity and willingness to face facts. “This is a business of relationships,” his handler warns him, but for Cogan and the others like him, what’s inviolate are compacts with oneself. There’s a weariness about Pitt that suggests he might even abandon his principles if he knew how to give them up. He’s afraid, in The Assassination of Jesse James, of the death’s-head his own face has gradually become. But the furor in his blood continually pulls him back out, into deep water, willy-nilly.

In these movies we pass from the grim telos of greatness that the world of men idly smashes to splinters, to the difficulty a storyteller faces when his beautiful and unbowed hero bleeds out. It’s not surprising that Robert Ford would feel unequal to the story, since he’s constantly and simultaneously admitting and denying that he’s Judas. But just as there’s something compelling about Ford’s demands to enter the charmed circle, by sheer force of will, there’s something about his failure on the stage that transcends his own mean motives and derelict personality. “Robert Ford,” at the moment of his own death, “would only lay on the floor and look at the ceiling, the light going out of his eyes before he could find the right words.”

A River Runs Through It, struck comparably dumb, goes skipping from the sepia past to a hoary, nostalgic present. It gets lost in poetic nonsense about time and rocks. “The river was cut by the world's great flood and runs over rocks from the basement of time. On some of those rocks are timeless raindrops. Under the rocks are the words, and some of the words are theirs,” Robert Redford tells us—and only someone as blessed with pathos as Redford could make that sound plausible in the least. I’ve no idea why there are raindrops at the bottom of a river, but then the film brings it all home: “As time passes, my father struggled for more to hold on to, asking me again and again: had I told him everything. And I finally said to him, ‘maybe all I know about Paul is that he was a fine fisherman.’ ‘You know more than that,’ my father said; ‘he was beautiful.’ And that was the last time we spoke of my brother's death.” The philosopher Ludwig Wittgenstein echoes that sentiment like this: “What we cannot speak about, we must pass over in silence.”

After all, the fact of Brad Pitt’s sheer presence, meaning both his frat boy high spirits and his movie star looks, is music without words; it waits to become meaningful within the frame of a story. A lesser actor could’ve spent his entire life playing “gotcha” with the aw-shucks routine, like Pitt did in his brief (but delightful) cameo in Thelma and Louise: look! One can smile, and smile, and be a villain! Or he could have auctioned off his face to the highest bidder, like he’s occasionally done in leaner years—for example, when he made Allied and Fury. But at the core of his filmography is a single story, iterated in a dozen glittering variations, about ungraspable peaks of experience, and how the rest of life becomes suffocating after those perfect triumphs fade.

A River Runs Through It has given me a way of talking about the friend who took too much acid, melted into schizophrenia, and never really came all the way back. Killing Me Softly burns down the lie that, well, if other people are careless, we ought to become a little bit careless ourselves, to make everybody else more comfortable. Meanwhile Legends of the Fall succumbs to its own myth-crazed epicness, featuring narration by an “old Indian” who seems to smile approvingly at all white boys who smear their cheeks with war paint. The idea of getting to the heart of greatness by letting One Staff talk us through it is fond, perhaps, but also ridiculous. There are, in fact, no words to reignite such pastness. The best stories are merely a faint ululation, allowing us to join together in grief. Grief descends like rain and brooks no distinctions. We rediscover our fundamental equality to one another in the act of mourning for things, and people, who have gone out of the world.