Way to Stick it to the Patriarchy 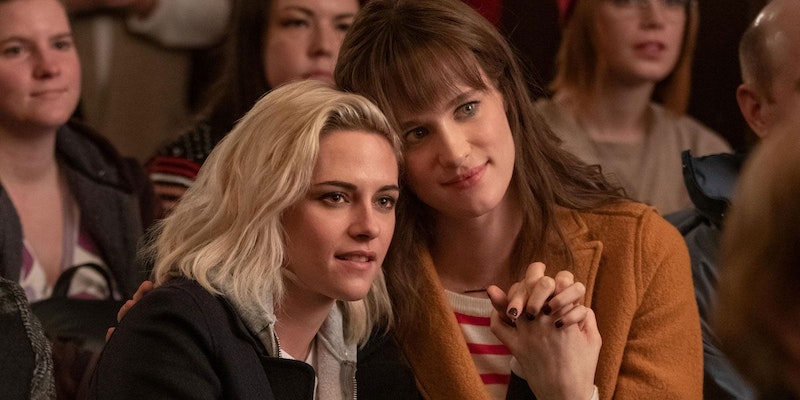 The opening credits of Happiest Season are full of cheesy illustrated postcards of moments shared between Abby (Kristen Stewart) and Harper (Mackenzie Davis). These tableaux feature the couple celebrating Christmas and other holidays together and going on romantic dates. Some of the snapshots include public displays of affection absent from the film that follows. The intro creates expectations for a fun celebration of a lesbian relationship in a holiday setting. But Happiest Season is too concerned with placating a mainstream audience to deliver on these promises. Director Clea Duvall attempts to make the focal lesbian relationship seem more palatable by surrounding it with examples of perversion and scandal.

The film opens as Abby and Harper are listening to a corny Christmas light tour of a street that has really decked its halls. Right away, we’re given a sense of perversion within holiday traditions. The tour guide is sharing the origins of this street’s annual decorating tradition, which involved someone who dressed as Santa until he was ”arrested for child endangerment in 1992.” Abby’s endures these hokey festivities, despite admitting to Harper that she’s “just not a huge Christmas person,” which Harper can’t even comprehend. However, she relents and they leave (after the tour guide shares facts about Christmas tree-related deaths).

It’s not just the forced cheeriness that turns Abby off from joining in the Christmas fun—it’s later revealed that her parents died in a car crash on December 25. In this first scene, however, we understand that she finds the traditions of Christmas silly. We later learn, when Abby is talking with her aloof gay best friend John (Dan Levy), that even though Abby has an aversion to Christmas, she’s very invested in the institution of marriage and wants to propose to Harper at her family Christmas party.

“What you are actually doing is tricking the woman you claim to love, by trapping her in a box of heteronormativity and trying to make her your property,” John tells her. Her response: “It’s not about owning her it’s about building a life with her. She is my person and I really want everyone to know that.” John makes a good point. Abby’s mushy response is a cop-out in that it fails to address the way marriage, built on heteronormative values, would benefit her and Harper.

When Harper and Abby leave the tour it’s the only scene where Harper is cool. Harper leads Abby to parkour up on the housetop of a random nearby resident. They begin to have a sweet intimate moment overlooking the goofy tour guide and the street of lights. But just as they are about to have a sweet kiss, their covert PDA is policed by someone in the house who threatens to call the police. Abby ends up dangling from the roof as a result of this scare. Abby has an expression of shame and disgust as she looks into the window she’s now hanging before. It seems she has interrupted a couple engaging in some kind of Christmas role-play BDSM. Her expression of disgust turns to fear when she’s accused by the woman inside of voyeurism.

Abby then falls or jumps down, deflating one of the only two Christmas decorations outside the house. The inhabitants, one dressed as Mrs. Claus with a whip and the other as a reindeer in a harness and handcuffs meet them downstairs. Mrs. Claus shoos the couple off her front lawn, calling Abby a “pervert.” She then exercises her dominance herding her reindeer back inside with her whip.

In Michael Warner’s book, The Trouble With Normal: Sex Politics, and the Ethics of Queer Life, he discusses German philosopher Theodor Adorno’s response to the early 1960s queer movement: “[Adorno] was able to say as early as 1962 that attempts to reform the regulation of sex had ‘something venerably suffragette about them... Whereas sexuality has been integrated, that which cannot be integrated, the actual spiciness of sex, continues to be detested by society... Sexuality is disarmed as sex, as though it were a kind of sport, and whatever is different about it still causes allergic reactions.”

There’s an effort of assimilation within gay movements for equality, an effort to fit queer relationships into the box of heterosexuality. Part of this effort involves a sanitization and taming of sex. Again, from Warner’s book: “[Adorno] saw that queers, like prostitutes, were going to bear the burden of the new paradox, as a culture that increasingly built itself around an entertainment industry of sex also found it increasingly necessary to insist that sex be hygienic and uplifting, that however ‘wild’ it had to be to funnel optimism into the pseudo-individuality of consumer culture, it also has to be, at times, healthy and normal. Given the celebration of sport sex as a way of selling commodities [like selling streaming platform subscriptions to Hulu], or distracting people from the banality of their mediated and administered lives, it may be hard for many people to recognize any kind of variant sex as having ethical value.”

Happiest Season fits in with this tradition of presenting queer people as “normal” to an audience, in this case, to generate hype and draw people to subscribe to Hulu. And it’s been successful, the most watched Hulu original film in its opening weekend. The Christmas romantic comedy subgenre is the most blatant medium I can think of that is built on “an entertainment industry of sex” while also being “hygienic and uplifting.” This film, the first mainstream lesbian Christmas rom-com wants to appeal to as many people as it can. Its only subversive moments act as ways to appease viewers who may be less comfortable watching displays of lesbian affection. The majority of the film involves Harper and Abby sneaking around and hiding their queerness from Harper’s family because, as Harper manipulatively reveals to Abby while en route to their house, she has kept the fact that she’s a lesbian a secret from them.

The climax of the film, which centers around Harper’s uptight sister, Sloane (Alison Brie), revealing Harper and Abby’s love for one another to her family and everyone at their large annual Christmas Party, is paired with another “scandal.” As Harper and Abby follow Sloane in an effort to curtail their exposure, they run into Sloane’s husband, Eric (Burl Moseley) making out with another woman in the closet. (The same closet that Abby was trapped in earlier when Harper convinced her to sneak up to her bed—not exactly a subtle connection.)

It’s revealed that Sloane already knew about this relationship and that they planned to eventually tell the family about their divorce plans. “I guess I'm not the only one with a secret,” Harper says. The stakes are high for both of these sisters as their father (Victor Garber) is running for office. It’s the political scandal of Harper being a lesbian, not Sloane’s divorce, that results in the father resigning. His sacrifice is portrayed in a heroic way.

The film places this queer relationship in direct opposition to heterosexual adultery/divorce. Happiest Season is at odds with itself in the same way Harper is at odds with her own identity. In order to create a Christmas product with wide appeal, Duvall sacrifices the film’s integrity. Harper’s secret-keeping is meant to be made more digestible for the audience in comparison to her sister’s divorce. At the 11th hour, Harper’s father becomes the film’s savior by accepting his daughter. One might expect something a little more subversive from a lesbian rom-com. As John sarcastically says when, early on in the film, Abby tells him that she plans to ask for Harper’s father’s blessing, “Way to stick it to the patriarchy.”