And the sorry careers of the Stella comedians. 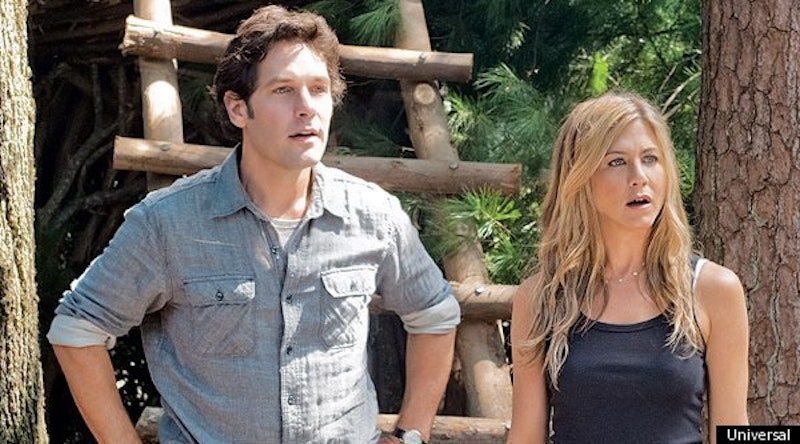 David Wain and his Stella comedy comrades (Michael Showalter and Michael Ian Black) are stuck in a weird place in our comedy landscape. They’ve always been trapped in an awkward zone—too weird and dark for primetime, too bland and clichéd for the snobs. All of them, Black especially, capture the disturbing and passive aggressive selfishness of yuppies and young married guys, regretful and without much to do but ridicule pop culture. Their movies and TV shows have a habit of going nowhere, so Michael, Michael, and David have been relegated to narrating credit card commercials and becoming tenured interviewees on I Love the 70’s/80’s/90’s/00’s for the past decade.

Michael & Michael are absent for most of Wain’s new film Wanderlust, where two New York yuppies fall into living on a hippie commune in the woods and gradually lose it. Stella’s cameo as smug, cynical newsmen making creepy, corny jokes about a ballerina’s birthday suit is the best thing in the movie (it’s interesting to think about a smarter, less simian Anchorman made by these guys). It’s a weird bit in a goofy and light movie, and it’s too bad that Black hasn’t been better utilized by anyone. He could split the straight man roles with Paul Rudd, who plays a parody of himself here, complete with over the top, earnest exasperation, serious communication problems with his flighty spouse (Jennifer Aniston) and women in general, and a scene where he mangles a phrase (“I want you to take my cock”) and pronounces it funny (“yoo tyake muh caauhwuhuuuuukk”).

Wanderlust is a movie you’ll consistently laugh at and probably watch just once. You want to root for the quality weirdo comedy it represents but only matches three-quarters of the time. Predictable jokes and set-ups drag on, but there are runs of really tight writing and editing that make the film swipe by. It’s silly and absent-minded enough for the whippet set, but if you’re not high, petulance and irritation set in. This feels a lot like Wain’s first film, 2001’s Wet Hot American Summer: there’s a camp, befuddled and hapless straight men, creepy old (naked) guys, strange horny old women, comically hot pixie girls, and attractive, buff nemeses. Wanderlust is slightly evolved: there’s money, it looks good, focused and evened out, but the premise and structure of the movie still feel like the work of stoned kids in a dorm, pretty good at coming up with ideas but unable to really pull it together convincingly.