The Hot Messification of the American Dream vs. People Who Can Actually Sing

Why watch American Idol when you can watch The Voice? 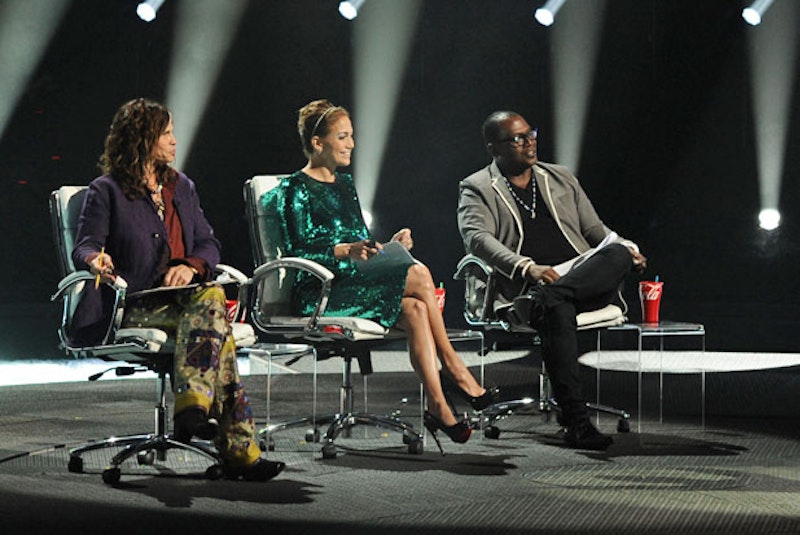 Look, American Idol is a hot ass mess. Every year America’s Favorite Beauty Pageant sweeps in and colonizes three whole nights of television, a fascinating move in that it reveals the shows’ cultural prowess and relevance. I’ve been watching Idol since the show sang its first Celine Dion ballad 10 seasons ago, when I used to do my runway walk all around the University of Michigan campus working it out to “Miss Independent” by Kelly Clarkson, a song I thought was the shit. You couldn’t tell me any different. Umpteen Idols later and only four of them have enjoyed mainstream success, and only two of those four have emerged from the Idol dust as down-right celebrities. (Kelly Clarkson is not a celebrity, people!). As the show reveals the Top 13 contests—the final two better be Phillip Phillips (cute) and Elise Testone, the only two singers serving what RuPaul calls Creativity, Uniqueness, Nerve and Talent—I’ve realized that Idol may want to be a talent competition, but it’s actually a Coca Cola-branded machine that cares more about itself than it does about finding pop stars. And once you stoop to that level—ratings for ratings sake—why keep it up?

I watched Idol this week and the lack of talent made me mad. It wasn’t even the lack of singing talent that bothered me because, let’s be real, some of our favorite pop-stars (Rihanna!) are not fabulous vocalists. But the fact is you can’t be a star if you don’t have presence, because a star’s job is to make an empty stage feel full with presence. So stars need to be able to work: work the room, work a note, work the stage, work the audience, work a pair of high heels. Virtually none of the contestants on Idol has presence because, for some reason, the producers don’t favor these people for the show. If you’re me, you watch an episode of Idol and think, These are the best singers you could find in all of America?!!? I’m no Pavarotti, but I mean really.

The more I watch Idol, the more I realize it’s not a singing competition but a hot messification of the American Dream, a dream which holds that, you know what? You can do it! You can be a celebrity, and we are going to cheer you on! Idol is the opening up—the democratization—of the normally closed system of celebrity. It’s celebrity put up to a vote.

Most people experience celebrity culture without realizing how celebrities are made, or even that they are, in fact, made. Hollywood is the big box of the celebrity industry. So the democratic promise Idol makes to American citizens is that anybody can be a “star.” I think it’s fairly amazing to see some people audition for the show who are all,  “I’ve been watching the show since I was _____, and it’s always been my dream to be on it!” And now, here they are. We haven’t had as powerful a celebrity making institution since Star Search, a show I remember but never really watched. Jn that sense, it must be great to grow up with Idol as an index, have the dream to be on it and actually make that happen.

But what I can’t deal with is the pretense that Idol is this great singing competition. In a bitch slap heard around the world, the much be-makeup-ed Randy Jackson said that “Idol is still the best TV show that's come on anywhere...We're the original. We kind of invented this whole game that everybody's now copying—and I say that they're copying it, right?...The winner of  The Voice, I will remind you, [Javier Colon] was an artist who had a deal at Capitol Records for several years, a failed contract [The Voice] was almost 'second chance people.” So basically what Jackson is getting at is that Idol is the best, most original, greatest singing competition show, even though it’s building on a tradition that other shows—like Star Search and Live at the Apollo—forged decades before Kelly Clarkson had her first period.

The truth is that The Voice is, by all measures, a much better showcase of vocal talent. There’s Jamar Rogers, the very sexy, tatted singer with some serious pipes who came out as HIV+. Then there’s Sera Hill, of team Xtina, who so impressed Ms. Aguilera that she got up out of her chair and sang Mary J. Blige’s “I’m Going Down” with her, and you know Christina doesn’t get out of a chair for just any and everything!

But the major difference between the two shows, though, is that, first of all, amazing singers are out there, it’s just that none of them are on Idol. The second is that almost all the contestants on The Voice have presence, the most important quality in terms of star making. They already know who they are as artists. When you see them you believe that they could, in that moment, not be on a reality TV set but in fact performing at, say, a major award show or in some other headlining space. And that’s where the contestants on Idol just don’t take me. I can’t imagine Taylor Hicks, et al. wowing a head-pieced Lady Gaga at The Grammys. Idol singers will always be glorified karaoke singers, for me anyway, at least until the show’s producers stop serving mess.