Harry Connick Jr. Is Not a Charismatic Assistant DA on Television 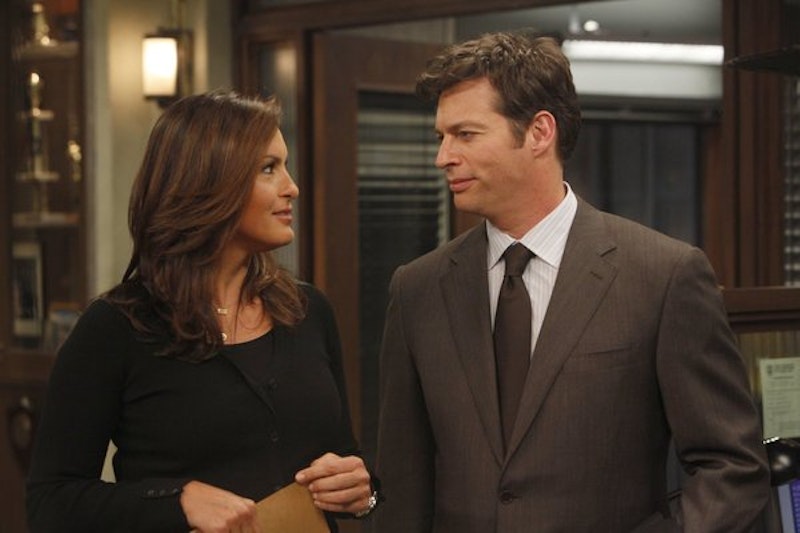 When Harry Connick Jr. smiles on television, it’s a thing of horror. The man doesn’t have dimples, he’s got crevices, grooves in his face that are a bit deeper than they ought to be. Crinkles are everywhere. The top half of his face tells a different story than the bottom does, and because neither story feels especially sincere, watching Connick deliver a line of dialogue is agonizing; it’s as though the two halves of his face are manipulated by puppeteers at cross-purposes. A shifty Southern handsomeness underlying dialectic of flesh made it possible for viewers to buy Connick as Debra Messing’s husband on the last few seasons of Will & Grace. But that was a comedy; Law & Order: SVU is a drama, albeit one with traces of black humor, and given the context, Connick’s a fish out of water. Now and again he’ll try to smile or adopt a suitably butch expression—dude’s playing an Assistant District Attorney, so mild sociopathy is part of the job description—and in so doing will convey the impression that he’s just thrown up in his mouth a little but is totally playing it off legit or that until recently he made his living as a champion prize fighter. This makes for agonizing television.

The Golden Girls wound down by marrying off Bea Arthur to Leslie Nielsen over a handful of episodes. Connick plays Nielsen to Mariska Hargitay’s Arthur; she’s supposed to fall in love with this upstanding champion of justice just as everyone’s learning to trust him. (In this case, when Hargitay exits, the show will go on. As on Criminal Intent and the original Law & Order, everybody’s replaceable. Am I saddened by the end of Benson & Stabler? Sure. Am I going to keep watching anyway? Yeah.) On Girls, Nielsen’s natural affability helped make his and Arthur’s whirlwind courtship believable, and the duo’s charm and comic timing made up for any remaining gaps in believability; it didn’t hurt that the Girls weren’t necessarily shy about hopping under the sheets with balding, eligible bachelors who happened to be related to their friends.

Hargitay’s character, Olivia Benson, is extremely guarded for reasons SVU has spent a decade and change exploring; that in a blink she’d risk her autonomy and career by taking up with a glad-handing stuffed suit strains plausibility. There’s no spark or chemistry to speak of; it all feels artificial. Watching these two kiss is like watching Liza Minnelli make out with David Gest, except that David Gest actually has a chin. And the danger of discovery by colleagues—the dramatic tension in these situations—is offset by the fact that we all know where this is leading, letting the air out of any adjacent thrill one might derive from this.

If she’s watching at home, recently retired CSI: star Marg Helgenberger has gotta be laughing her head off at how this plot is unfolding, because a) her send-off was bitchin’ and involved Ted Danson, and b) really, Harry Connick Jr.? Couldn’t they have lured Dean Winters back or something?