Read parts one, two, and three. 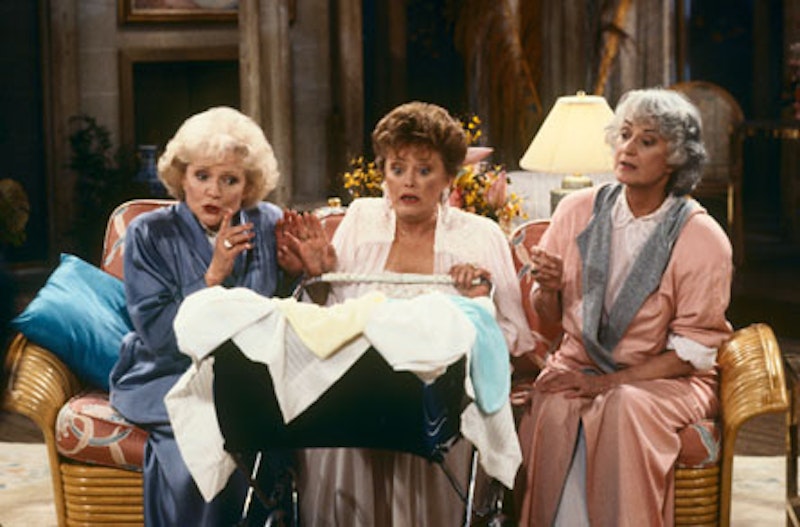 1. The Golden Girls was a television show centered around four retired, working women—oxymoronic, no?—women, supporting themselves, who earlier in life hadn’t necessarily had to work. There’s little indication that Blanche (museum assistant) or Rose (grief center worker initially, television reporter later) pursued careers prior their late spouses’ pre-series deaths; Dorothy’s long teaching career, meanwhile, consisted entirely of substitute teaching, a fact that was never explained; from flashbacks, we know that Sophia took in a bit of sewing work now and again when Dorothy, Gloria, and Phil were growing up, but as an octogenarian her contributions to the national economy consist solely of stints at pirate-themed fast-food restaurants. Revolutionary and revealing as this state of affairs may have seemed in Golden Girls’ me-generation heyday, America has changed so drastically, economically speaking, that a modern re-make of this show couldn’t equitably get away with the same thing.

A revised Golden Girls would by necessity focus less on the four core women characters than it would on those four core women characters and their adult children and grand-children living together in a McMansion somebody picked up for a song in a short-sale, Eight Is Enough/Brady Bunch style; one of them would have to be a part-time realtor. It would probably be a horrible, short-lived show – much too close to reality for anyone’s comfort.

2. A casually vicious racism runs rampant in this candy-coated version of 1980s Miami, a racism which, on Golden Girls, might be excused away by the characters’ age bracket, their closeness and collegiate familiarity, and, you know, the leftist specter of Norman Lear.

3. There’s a great episode—episodes, actually, this was one of those two-part deals—where Blanche gets it in her head that, get this, she’s destined to be a great writer (comparing herself to Ernest Hemingway at one point), and she stays up for days on end scribbling gibberish and emerges from her bedroom delusional and hallucination-prone, mistaking a baggie of egg yolks for tiny suns and just generally giving a bravura of a freak-out performance.

4. Re-thinking the continuity hiccups that plagued this show just yesterday, it occurred to me that maybe these inconsistencies were wholly intentional—the producers’ way, perhaps, of compensating for the cast’s relatively consistent lucidity. Without putting too fine a point on it, there should have been a great many more stoves left on and garage doors left open; while the producers and writers did an admirable job of addressing many aging-related issues, a great deal was sidestepped or played for laughs, giving short shrift to the sinister pitfalls of senior life. Varying gradations of character believability persisted: Rose never lied, rarely forgot; Dorothy wasn’t a teller of tall tales; Blanche embellished and fabricated wildly; Sophia was reliably and enthusiastically full of shit, but her heart was always in the right place.

5. As it aged—as the mannered anarchy of the first few seasons gave way, slowly, to schlock and formula—The Golden Girls threatened to jump the shark repeatedly, usually when the writers tried, too obviously, to piggyback on top of one cause or another.

6. Seriously, there’s almost no one left who Betty White could have anything even approaching a Golden Girls-esque reunion with, now. Getting her together with Cheech Marin and Don Cheadle for a trip down Golden Palace memory lane? Seems pointless, and it’s not like Empty Nest regulars Park Overall, Kristy McNichol, or David Leisure would have anything to gain, either. Everybody’s living on increasingly borrowed time.

7. If you’re above the age of 35 and can make it through the scene above without tearing up a bit, you have no soul.