Trading Places vs. the Myth of Meritocracy

Kick the rich, but not too hard. 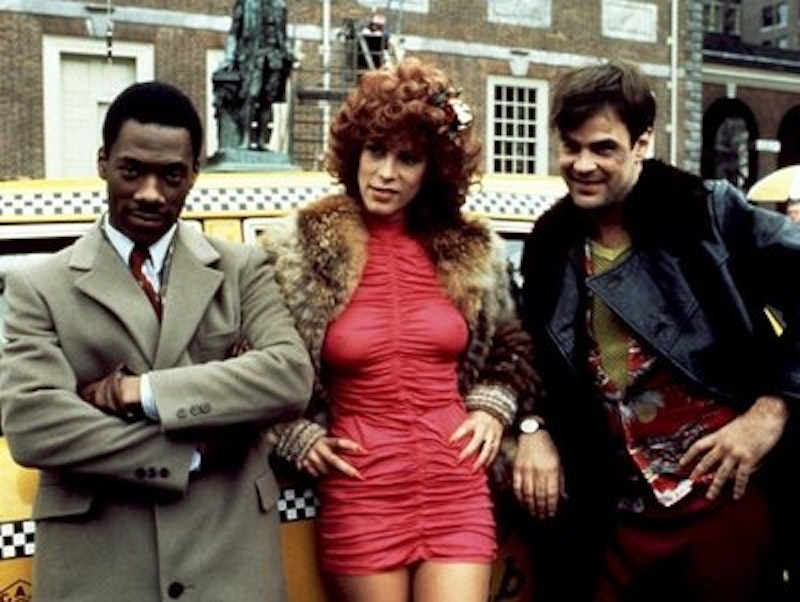 This is part of a series on 1980s comedies. The last entry on Beetlejuice is here.

The myth of meritocracy is a building block of most Hollywood films. Protagonists who win are possessed of moral virtue and relevant competence; villains who lose are evil and not as strong, tough or skilled as the good guys. This is always the case in action movies, but it's even generally true in comedies. Mr. Green ends Clue for the final time with a skillful pistol shot, so competent even the recipient is dazzled. In Beetlejuice, Barbara's purity and niceness is such that the sandworms take her side against the evil titular ghost. An undeserving victory isn't very satisfying, so Hollywood always makes sure it's deserved.

Trading Places (1983), though, doesn't share the Hollywood consensus—or at least, it expresses caveats. Director John Landis' film is a cheerfully pointed parable about the fundamental unfairness of the capitalist system, which it presents as built on luck, prejudice and corruption, not necessarily in that order. The wealthy in Trading Places are bloated incompetent assholes, who conspire to push the losers further into degradation and despair.

The film centers on Louis Winthorpe (Dan Aykroyd) a wealthy manager who runs the brokerage business of Randolph and Mortimer Duke (Ralph Bellamy and Don Ameche). The Duke brothers have an ongoing argument about the relative influence of nature and nurture. Randolph thinks circumstances make the man, Mortimer thinks people are shaped by breeding. They place a bet of $1 to see if they can push Louis into a life of crime while transforming homeless con man Billy Ray Valentine (Eddie Murphy) into a respectable broker.

Those experiment mostly shows that neither Randolph nor Mortimer are right. In the film, nature and nurture don't shape people; rather, privilege does. Before the Dukes start their meddling, Billy Ray is accused of trying to steal the payroll simply because he bumps into Louis on the street. The Dukes pick him to transform because they believe he's a thief corrupted by nature or nurture. But the truth is he didn't do anything; he's thrown in prison because he's poor and black, not because of any moral failure on his part.

Similarly, Louis doesn't slide into crime and despair because his environment changes. He does because the Dukes orchestrate a conspiracy against him. Their thuggish operative Clarence Beeks (Paul Gleason) frames Louis for theft, frames him for dealing PCP, and then pays Ophelia (Jamie Lee Curtis), a prostitute, to proposition him, ruining his relationship with his fiancée. They even pay Louis' butler, Coleman (Denholm Elliott), to pretend not to recognize him. Poverty is less an accident of circumstance than a deliberate plot. The wealthy have minions—including the police—who work ceaselessly to make sure that those without are kept without. Louis was on the side of the powerful; then he was ground underfoot. "Just be yourself, sir. Whatever happens they can't take that away from you," Coleman tells Billy Ray. But the point of the plot is that the self is something the rich can buy and sell. Merit doesn't make you who you are; someone else's money does.

If you give Billy Ray a house and responsibility and no reason to steal, he won't steal. If you take Louis' house, job and fiancée, he'll put on a Santa suit, steal slabs of salmon from the Christmas party, and drink himself into a belching, gun-waving stupor. Prejudice and a malevolent social structure push people into different boxes. That's the obvious critique of meritocracy. But even more telling, perhaps, is the portrait of Randolph and Mortimer Duke, two of the great villains of the 1980s.

Evil rich people are often portrayed with a mixture of loathing and fascination. The wealthy bad guys in Oliver Stone's Wall Street (1987) or The Wolf of Wall Street  (2013) or for that matter in Goodfellas (1980) are appealingly violent and oversexed; they have a badness that swaggers, and a lifestyle to envy.

Randolph and Mortimer, in contrast, are not appealing or enviable in any way. They have no sex lives, and no apparent desires save for money and "scientific experiments" which involve ruining the lives of friends for no reason. They’re stingy; the enormously wealthy Randolph gives his butler five dollars as a Christmas bonus, prompting the man to quip "I can go to the movies, by myself." (Randolph misses the irony.) They’re viciously racist; despite Billy Ray's success in his new job, they both agree that they have to "send him back to the ghetto" eventually because they can't have a "nigger run our family business." Destroying Louis' life was unusual for them only in that Louis is white; the wealthy conspire against black people as a matter of course.

Furthermore, and importantly, Randolph and Mortimer aren't especially good at being bad. They aren't efficiently vicious or even moderately perspicacious; they just have lots of money and can pay people to make them more. The Dukes have spent their lives as Wall Street brokers, but Billy Ray is better at reading the market than they are with about five minutes of instruction. Their big money-making gambit in the film involves straightforward, rudimentary corruption; they pay Beeks to steal an agriculture report on orange juice so they can engage in insider trading.  Nothing about their fortune is earned; they inherited wealth, and then they cheat to expand it.

Trading Places ultimately can't follow through on these bleak insights, or it wouldn't be a comedy. After establishing that merit and success have little to do with each other, it has to somehow get to a conclusion in which the virtuous and talented are rewarded and the rich parasites get what's coming to them. After they've stolen the agriculture report and given the Duke's a false one, Louis gives Billy Ray a pep talk about mental toughness and taking no prisoners on the pit floor. Their success in trading is thus framed as a matter of competence, boldness, and skill, even though it's really, again, a matter of inside information. The Dukes were wealthy assholes who didn't deserve their money. Billy Ray and Louis take their place because they’re better at the game of acquiring assets. The race ultimately goes to the swift, who’re also the most virtuous. Order is restored.

Similarly, even as the film identifies and condemns structures of racism, it rather helplessly reproduces them. Eddie Murphy is a much more charismatic actor than Dan Aykroyd. He dominates every scene he's in, sometimes just by looking deadpan at the camera. Aykroyd's Louis never convincingly evolves beyond the smug, whiney prat from the beginning of the film—not even when, in a very poor directorial choice, he spends a scene in blackface. Yet, it's Louis who gets the leading role. Ophelia falls in love with him, for reasons that are unclear, and in the pit he's the one teaching, with Billy Ray as his mentee. The film knows that Mortimer and Randolph are rich white jerks who don't deserve their fortune. But it can't quite grasp the fact that being briefly poor doesn't make Louis any better.

When Ophelia, Billy Ray, and Coleman become wealthy at the end of the film, it shows that wealth and poverty are structural positions, not moral states. Working people, sex workers, black people, and the homeless are different from the wealthy in that they have less money, not because they have less virtue or skill. But at the same time, moving people from one place to another on the game board doesn't change the board. Trading Places ends happily because the bad people have become poor and the good people have become rich. Coleman now has his own butler to order around. The new boss is, supposedly, more meritocratic than the old boss. But as Trading Places shows, the rich lie a lot, not least when they claim that they are rich by merit.