A Kind of Spiritual Dread

Another look at Ingmar Bergman. 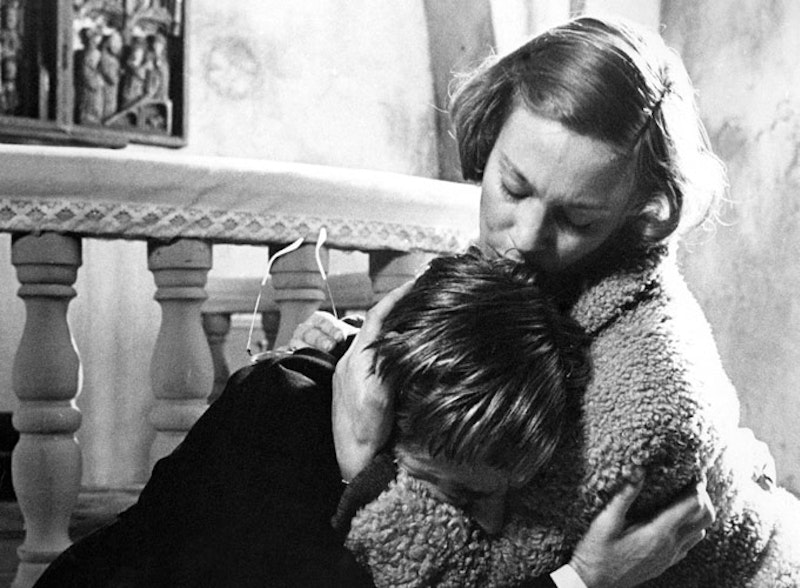 Ingmar Bergman’s vision of God in Through a Glass Darkly (1961), which I wrote about last week, was that of a creature oscillating between a spider and more elusively, love. There was a clean and somewhat hopeful certainty represented by the characters. By contrast, in the second film of the “silence of God” trilogy, Winter Light (1962), God is present in His absence. This may seem like a contradiction but faith, according to Bergman, is contradictory by nature.

Winter Light is presented as a linear story punctuated by the existential dread of two characters—Pastor Tomas Ericsson and Jonas Persson. Dread and anxiety are two themes always present in Bergman’s works but here, we see it more prominently because it’s felt and experienced in relation to God.

Persson suffers from anxiety over China’s threat of an atomic bomb. His interior world is crumbling, and his wife, Karin, asks the Pastor to offer spiritual guidance to Jonas. Immediately, there’s an implication that unless someone brings light and hope into Jonas’ life, he’ll commit suicide.

Tomas is half-hearted about welcoming Jonas and asks him to come later. The waiting creates even more dread for Tomas because there’s no certainty about Jonas’ arrival. When the moment finally occurs, Tomas offers empty words. What should be the case of spiritual guidance and discernment becomes a reverse confession in which Tomas pours out his own fears and failings as a man of the cloth.

The result of this painfully awkward meeting is Jonas’ quiet acceptance of his own fate—he commits suicide. Tomas is greatly affected and yet despite that he’s unable to offer anything more than perfunctory platitudes to Karin. He’s a lost man—lost in his own pain over the death of his wife, lost in the annoying pestering of Märta, a “schoolmarm” set on making Tomas her love partner, lost in the disconnect between himself and Christ. He’s a wanderer in the regions of his own soul and the map that served him well in the past has burned. More than anything, he feels that he’s failed as a pastor and as a human being.

Every faithful person goes through a time of doubt about God’s existence, or as John of the Cross and Teresa of Avila called the “dark night of the soul.” That person suffers silently but never gives up on the possibility of seeing and reuniting with Christ in their earthly life. In fact, it’s in this darkness that faith is strongest because that’s when the biggest spiritual challenge arises. This person hopefully accepts this challenge, as he chooses to be cleansed and purified before he enters another stage of spiritual perfection.

This isn’t the case with Tomas. Just like his name alludes to Doubting Thomas, he remains not only in doubt about God’s existence, but appears to be a coward unwilling to face the call of God.

There are many instances in the film in which Tomas falls asleep. This is an apt metaphor for our own turning away from the suffering (whether our own or of others). As a pastor, he’s supposed to remain in a state of wakefulness at all times and shouldn’t avoid the reality that’s clearly presented to him.

Much of Tomas’ state of being depends upon his relationship with Christ, which then extends into the relationship with individual members of his community. He doesn’t understand the suffering of Jesus and at times is repulsed by it. This is a normal human reaction that anyone might have to the image of the Crucifixion. Questions that Bergman poses are theological—why is God silent in the midst of evil, and how can we possibly be moved by an image of a suffering man, dying in slow agony? What possible ecstasy can even exist in this strange mixture of human dispositions? No doctrine of theodicy is going get Tomas out of this mess.

Maybe Tomas isn’t a coward. Throughout the film, he’s honest about his shortcomings but we never see a man willing to prostrate himself in front of God. He lacks humility in his doubt and because of this, he’s unable to help Jonas break out of the existential prison.

Unlike the priest in Robert Bresson’s adaptation (1951) of Georges Bernanos’ novel (1936) Diary of a Country Priest, who accepts his anxiety as a cross he has to bear, Tomas refuses such a task. This may also be a function of a difference between Roman Catholicism and Protestantism. However, even if we don’t focus on doctrinal differences between two denominations of Christian faith, Bergman’s insistence on presenting us with a man in deep dislike of God, tells us that doubt is just as much a character in this film as Tomas himself.

The film ends with the church service. Despite the low attendance and Jonas’ suicide in the background, Tomas still chooses to celebrate God. Is this an act of merely going through the motions, repeating the rituals with no connection to the spirit of God? It could be.  But in the fact that Tomas makes that decision, Bergman offers a small glimpse of the possibility of being. Just like we will never “know” God fully since God is beyond comprehension, we shall never know fully one man’s interiority.

Today, talking about faith and doubt may seem like a quaint exercise that, by implication, questions whether Bergman’s films are even relevant for today’s audience. But that’s like asking whether we should still read Shakespeare. There’s a universality in Bergman’s works that the audience will still respond to and be moved by. Bergman’s ideas and images are perennial—whether he deals with the question of God’s existence or one man’s reflection on life and death as he’s hounded by dreams (Wild Strawberries), or about choices we make between forgiveness and revenge (The Virgin Spring), or the tension between the erotic and the ethical (Summer with Monika).

Bergman shows us the frailties of human condition. As he shows and focuses the camera on the human face, he presents us with the opportunity to look in the mirror and see those fragmented parts of ourselves as we are desperately trying to put them together.