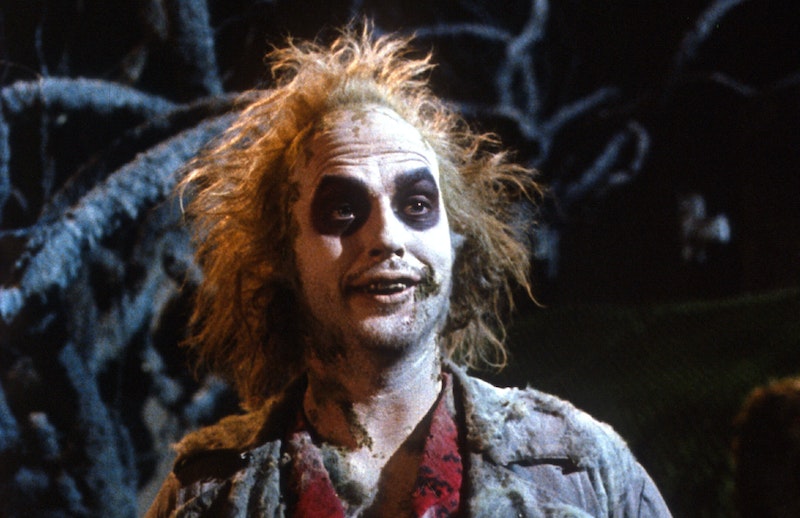 This is part of a series on 1980s comedies. The last entry on Clue

Last week, I wrote about Clue, a film that purports to be about bringing culprits to justice, but in fact revels in the pleasurably libidinous mischief of its anarchic wrongdoers. Beetlejuice, in contrast, presents itself as a joyride of mystical weirdness—but ends up as an oddly sincere embrace of drab suburban conventionality.

The Beetlejuice bait and switch starts with the title character. Michael Keaton as the gross, lecherous, undead Beetlejuice steals every scene he's in, lurching from carnival barker to supervillain while embodying American bourgeois fears of the homeless and déclassé with every well-timed belch or casual snack on a cockroach. His entire performance is a sneer at the middle-class suburban lifestyle and the American meritocratic dream of polished careerism. "Ah. Well..." Beetlejuice says when he's asked for his credentials:

I attended Juilliard... I'm a graduate of the Harvard business school. I travel quite extensively. I lived through the Black Plague and had a pretty good time during that. I've seen the EXORCIST ABOUT A HUNDRED AND SIXTY-SEVEN TIMES, AND IT KEEPS GETTING FUNNIER EVERY SINGLE TIME I SEE IT... NOT TO MENTION THE FACT THAT YOU'RE TALKING TO A DEAD GUY... NOW WHAT DO YOU THINK?!?!?!?!? You think I'm qualified?

The speech, and many others, shows that Keaton is uniquely qualified—but, bizarrely, director Tim Burton doesn't seem to know who his star is. Rather than letting Keaton off the leash, the bulk of screen time is devoted not to Keaton upchucking on middle America, but to the embodiment of middle America (albeit disembodied). The main characters of the film are Adam Maitland (a young Alec Baldwin) and his wife Barbara (Geena Davis), two uninteresting non-entities with a gigantic house that they end up haunting after a car accident. The main conflict of the film involves their efforts to drive away the hip New York family that moves into their home after their death. They can’t rest so long as someone threatens to change their décor from plain vanilla to modernist gray.

The father moving into the house, Charles Deetz (Jeffrey Jones) is a neurotic businessman in search of a rest cure, but the film saves its real animosity for his wife Delia (Catherine O'Hara). Her main sin is that she's a woman artist with ambitions; the film never tires of mocking her sculptures, or sneering at her reasonable irritation at being dragged out to the butt end of nowhere to live in an aggressively cutesy mansion. Even worse than her art, in the film's eyes, is the fact that she employs Otho (Glenn Shadix), an interior decorator who is supposed to be loathsome because he’s overweight and gay.

The film does like the New Yorker's daughter, Lydia (Winona Ryder), who dresses in elaborate funereal gowns and intones morbidly, "I am utterly alone!" But Lydia's weirdness is presented as just a phase or an affectation; once she's come under the tutelage of the boring salt-of-the-earth ghosts Adam and Barbara, she casts it off and starts to study math like good kids are supposed to. At the end of the film she's modified her signature style to accommodate a standard school uniform; she still has a long black dress and boots, but the plaid school skirt is layered over it. As in The Breakfast Club, the happy ending shows the makeover of a troubled teen girl. The Maitlands have become her surrogate parents and are having a positive influence on her, because normal is good.

The domestication of Lydia parallels the domestication of the film's own imaginative weirdness. Burton includes numerous dramatic claymation special effects—the Dune-inspired sandworms with Alien mouths within their mouths, who’ll consume the ghostly Maitlands if they leave their house are perhaps the most dramatic and visually interesting. The half-assed Dali landscape in which the sandworms live is not so great.

Barbara and Adam can twist and warp their features in order to frighten the Deetzes—but the film’s joke is that the cutesy couple is bad at being abnormal and terrifying. The Maitlands end up looking silly rather than frightening. They can put on the appearance of weirdness, but they aren't really weird. The film becomes the story of how the Maitlands overcome the idiosyncrasy of death to reimpose virtuous suburbanism on their home. At the film’s conclusion, Barbara inexplicably tames a sandworm, which she rides through the ceiling to swallow Beetlejuice. Even the sandworms love middle-class order and hate the proles.

The Maitlands do enjoy one unusual ghostly parlor trick, and it's a telling one. They try to frighten the members of a Deetz dinner party by cursing them with a spectral karaoke; they force the Deetzes and their guests to lip-sync their way through Harry Belafonte's "Day-o (Banana Boat Song)."

The recorded Belafonte's singing, at the dinner party and in another karaoke number with Lydia mouthing a calypso tune at the end, is virtually the only dialogue by a black person in the entire film. Even for the 1980s, Beetlejuice is shockingly white. There’s one black moving man with a bit part, and then a couple of stereotypical head-shrinkers encountered in the afterlife waiting room. One of the head-shrinkers gets the last gag, when, in a coda to the film, he silently shrinks Beetlejuice's head.

Blackness is connected in the film to death, magic, and weirdness. The Maitlands’ parlor trick is essentially a blackface lip sync—grabbing a bit of that outré blackness without the inconvenience of actually putting speaking black people on screen. And, notably, the Deetzes are not scared when forced to perform a calypso number. They think it's fun and exciting—a bit of safe, contained otherness they can appropriate for themselves without upending the film's white Hollywood default.

That's how Beetlejuice works. The anarchic fantasy and the imaginative effects are careful to never get too anarchic or imaginative. Happiness is threatened by the tiny homeless Beetlejuice living in Adam's attic scale model, the queer people and artists and Goths moving into the Maitlands’ home. But heterosexuality and mundane interior decoration are ultimately restored. Happiness is a 1950s sitcom, with Harry Belafonte safely relegated to a phonograph.