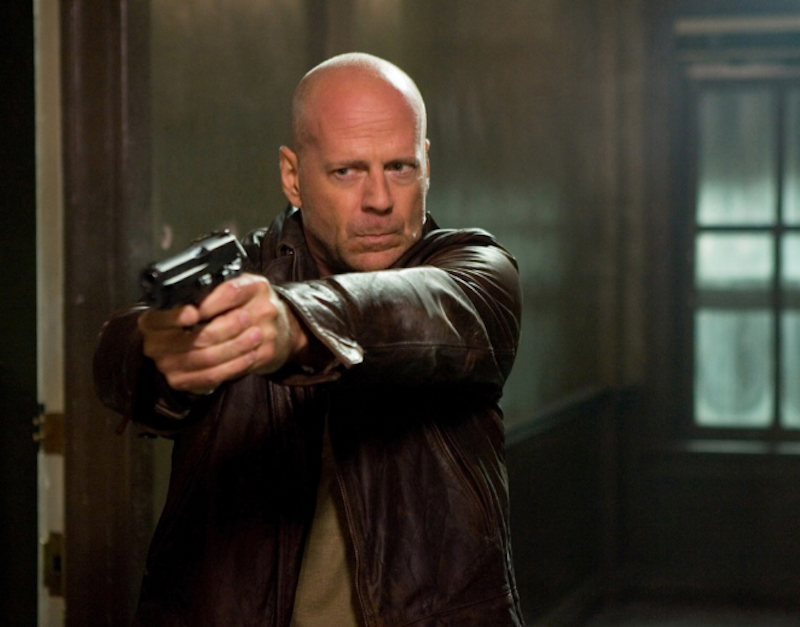 The new Death Wish is a NRA jerkoff fantasy, a love letter to guns, torture, extrajudicial murder, and the joys of self-actualizing as a real man through the commitment of wanton violence. In the works for years, the remake was clearly conceived as an attempt to cash in on the 60-year-old-guy-kicking-ass-to-protect-his-daughter ethos of the Taken films, before finding new meaning in the Trump era. If you nodded along enthusiastically to the president’s “American Carnage” inaugural address, you’re the clear target audience here.

The new Death Wish, moving the action from Abe Beame-era New York to present-day Chicago, stars Bruce Willis as Paul Kersey, a Chicago surgeon who lives with his beautiful wife (Elisabeth Shue) and college-bound daughter (Camila Morrone). Horrific violence arrives quickly, and when the police throw up their hands and say they can’t solve the crime, Paul takes over, offing random criminals before turning his attention to the actual perpetrators.

There are various intriguing directions a Death Wish could’ve gone. A black hero? A different third act that interrogated its own premise, maybe by making it clear that the hero had killed the wrong person by accident? A revisionist take, doing for the Death Wish mythos what Unforgiven did for Westerns? But Eli Roth’s never been an introspective filmmaker, so there’s no revisionism to speak of. In the film’s worldview, much like the president’s, it’s forever 1974.

The timing would’ve been off anyway, even before the Las Vegas and Parkland massacres. Now? To say this film has misread the mood is an understatement. There’s even one scene that, egregiously, treats it as a punchline that it’s too difficult these days to legally buy a gun. As we watch Willis getting radicalized, and learning gun tricks via sketchy YouTube videos, we see Stephen Paddock’s origin story, only this time with Paddock as the hero and audience surrogate.

But beyond its failure of moral tests, the film is just sloppy, even beyond the weird tonal shifts and laughs that pop up where they least belong. Why are Chicago detectives investigating a crime that took place in Evanston? Why isn’t the murder of a beautiful white woman a major news story and huge priority for police? Why does a murderer make a phone call from an unblocked number? Why does the hero grab his daughter—who just survived a horrible trauma—and shove her into a secret compartment with no warning? And why aren’t there reliable security cameras in about 25 locations where there should be?

Willis’ performance may go down as the worst of his career. This is his first starring role in almost five years, as he’s been mostly toiling in direct-to-DVD fare the last few years, and to say he’s lost a step is an understatement. He practically sleepwalks, emotes poorly, tanks his major monologues, and spends most of the film looking tired and out of breath. The Taken films, for all their faults, ran largely on Liam Neeson’s charisma, but Willis’ leading-man screen presence seems all but exhausted.

Also around is Vincent D’Onofrio, playing Willis’ brother in an arc that never goes anywhere and Dean Norris, reprising his Breaking Bad role as the affable law enforcement officer who inexplicably fails to notice that the bald guy right under his nose is obviously guilty of horrific crimes. And the villain, Beau Knapp, gives a performance that’s high school theater-caliber.

The film’s racial politics are awful. The film’s set mostly in downtown Chicago and Evanston, while the Chicago gangland murder epidemic is something that plays out on the margins, in the background, as part of radio commentary. The implication is that the gang members who kill each other are worthless and disposable, while the wealthy white hero—who’s just as violent and bloodthirsty if not more so, is worthy of sympathy and attention.

Death Wish is going to be the favorite movie of the year for people who like to say, “But what about black-on-black crime in Chicago?”