Too Much Personality, Or Not Enough

Split is yet another exercise in exploiting mental illness. 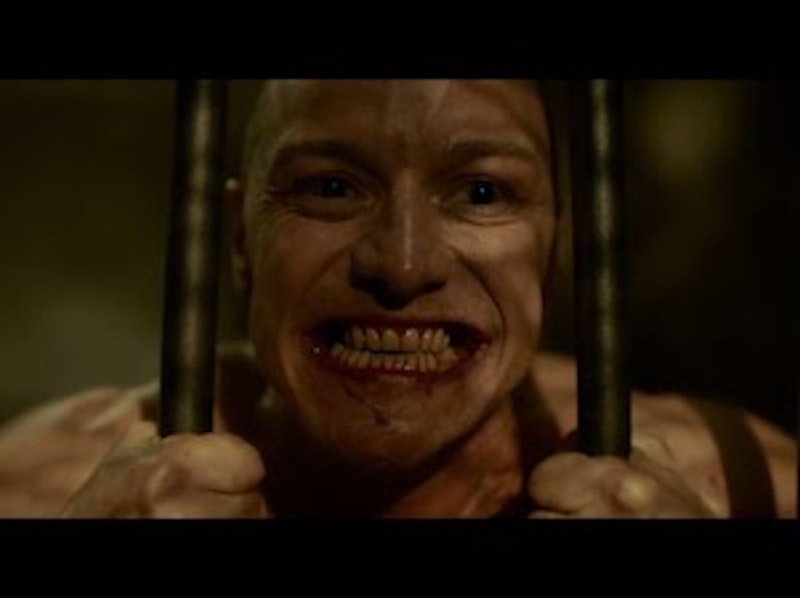 This is part of a series on Blumhouse horror films. The last entry on Paranormal Activity 2 is here.

Hollywood loves abuse. Assault, and especially sexual assault, provides surefire prurient content, which is dramatic and voyeuristic. More than that, abuse is an easy substitute for character building. A tragic backstory tells you everything you need to know about a person on screen. You don't need personality when you have trauma.

M. Night Shyamalan's 2016 film Split takes abuse-as-character to a logical and absurd extreme. The movie is about Kevin Wendell Crumb (James McAvoy), a man who was abused by his mother as a child, and developed dissociative identity disorder. Kevin has 23 distinct personalities. Some of those personas have developed a kind of reverse Nazi ideology, in which the mentally ill are stronger and eugenically superior, and have the right to wipe everyone else out. Kevin's evil personalities kidnap three high school girls, so that a 24thpersonality, known as the Beast, can feed on their impure purity.

Split wallows in preposterous, pseudoscience burble about how Kevin's personalities are actually different people. Trauma can, we’re told, unlock the power of the brain to change the body—the Beast is has super-thick skin and can climb walls. But the real innovation of the film is not any of this silliness, but its blatant equation of abuse, not with power or purity, but with interestingness.

This is most obvious in the portrayal of Kevin. Dr. Fletcher (Betty Buckley) constantly tells various Kevin personas that they’re wonderful and fascinating. In this, she's meant to speak not just for herself, but for the viewers, who are to admire the multiple-personality gimmick, and, especially, the actor at the center of it. McAvoy's performance is a hamfest; he switches back and forth from an OCD janitor named Dennis, to a gay fashion designer named Barry, to a lisping awkward nine-year-old named Hedwig. Each is over the top, laden with schticks and tics, and of course there are inevitable opportunities in the script for him to switch rapidly from one to the other.  Performers are often lauded for portraying mental illness, and Shyamalan clearly wants you to cheer this acting exercise, not because it’s believable, subtle or nuanced, but simply because it’s abnormal.

It's not just Kevin's (multiple) character that’s defined by fascinating trauma. Casey Cooke (Anya Taylor-Joy), one of the kidnapped girls, also has a history of abuse. Through flashbacks, we learn her uncle, who’s also her guardian, has sexually abused her throughout her life.

The abuse explains her acting out at school. It's also, again, why she's presented as more worth watching and sympathizing with than her co-captors. Claire (Haley Lu Richardson) and Marcia (Jessica Sula) are pampered popular kids, who’ve never really suffered. They fantasize about fighting Kevin with karate, but Casey sneers at them for their cluelessness. "Everything is so easy for you guys," she spits. "You do one thing, you can predict the next thing. It's not the way it's gonna be in this situation." (Though the truth is that the Hedwig persona is not very imposing, and with three on one it seems reasonable that they could in fact overpower him. But never mind the plot holes.)

Casey, for her part, is practiced in manipulating abusers; she gets Hedwig to let her out of the locked room, and almost manages to make contact with the outside world. Her life skills, though, are less important overall than the fact that her traumatic past means that the film’s invested in her. "Those who have not been torn have no value in themselves and no place in this world! They are asleep!" the Beast rants. It's supposed to be a sign of his insanity, but it's also the ethos of the film. After murdering her pure, happy companions, the Beast spares Casey when he sees that she's cut herself, and is therefore an abuse victim like Kevin.

You could see Split as a plea for compassion for people with mental illness or a history of trauma. Kevin and Casey (the parallel in their names is no doubt intentional) both feel shunned and mocked by their peers. The narrative focus on them is validating; Shyamalan is insisting that their stories matter and that they’re wonderful and valuable. From this perspective, Split is the unusual Blumhouse film with a conscience.

Alternately, you could see Split as a cynical exercise in exploiting mental illness and abuse for voyeuristic thrills. Shyamalan is obviously indebted to Psycho, and the driving impulse behind the movie seems to be, "Hitchcock had a murderer with only two personalities; I can do six times better than that!" McAvoy's impossibly varied expressions and Casey's blank stare both signal trauma, and nothing else. Their characters are simply what happened to them. Shyamalan, despite his protest, doesn't care about the people who have been torn. He just likes looking at the wounds.