Everyone in the film is more interesting than its 13-year-old protagonist. B- 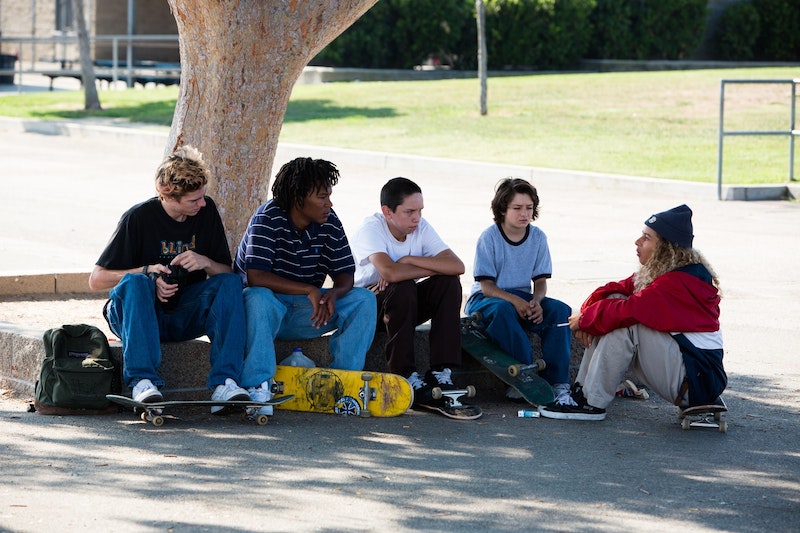 In one of the scenes where Mid90s—Jonah Hill’s drifting, wide-eyed scrape through navigating puberty on a skateboard—is almost a good movie, 13-year-old Stevie (Sunny Suljic) is playing video games with his hardass older brother Ian (a gallon-jug toting Lucas Hedges on steroids), who notices a pack of cigarettes peeking out of his jeans. “Jesus, you smoke now,” he nags in that half-caring way that an older brother will when he wants to express affection and concern but can only do it in a gruff, paternalistic way.

A better filmmaker would live in this moment, but Hill blows through it with a didactic line about how Ian is secretly resentful that their mom (who barely appears in the movie) didn’t have it together for him the way she does now, spoon-feeding us backstory that’s never followed up on.

What Hill’s dialogue absolutely nails, however, is the way teen boys (the only women in this film, it’s worth noting, are his mom and an older girl he hooks up with at a party) talk to each other. Stevie’s aimless skater pals hang around a board shop that they seem to own (no adults or customers appear), shooting the shit with questions like “Would you rather suck your dad’s dick or eat out your mom,” roast each other’s missteps, and inarticulately pose sincere questions (the one white character asks if “It’s cool to be black,” and ringleader Ray explains “People judge you and stuff,” which is exactly how a teen would talk about racism).

It also captures a precise type of reflexive homophobia that rings true for me as a boy growing up in the mid-2000s; I cringed when I remembered being told it was “gay” to flex my fingers out flat to look at my nails, I should curl my fingers instead.

If Mid90s gets the small moments of adolescence right, it flounders trying to take on the big stuff, to channel a time before you’re conscious of the larger world but still have to deal with its effects.

“Why do you think we never want to go home,” Ray (Na-Kel Smith in the best performance of the film), says to Stevie in a heavy-handed pep talk scene that lays out each kid’s troubled home life: Ray’s brother was killed in a car accident, Fourth-Grade is “too poor to afford socks,” Ruben stays out all night to avoid his drug-addicted mother, Fuckshit struggles in school and slips into alcoholism and drug abuse.

Every one of these characters, whose home lives are only hinted at, would’ve been a better protagonist than Stevie, who looks like an LL Bean model and has a pretty nice mom who just doesn’t want him to fall off roofs or take Percocet.

In a standout sequence, police ambush the skate park in a glorious slow-motion tableau, grabbing and tackling kids as they flee en masse on skateboards and juke around mustachioed cops. We follow Stevie, who ducks behind a dumpster and peers out to glimpse the chaos unfold, and an oceanic grin spreads across his face.  “HOW NEAT IS THIS,” Hill’s direction screams at us. It’s pretty neat, but the visceral beauty of pure teen rebellion is anesthetized by our removed perspective—surely based on Hill’s own experience—as a rich kid slumming it in the war zone. Again, this movie would be so much better if it was about any of the other characters in the group. Imagine: we smash cut from the dreamlike scramble of boards and whistles to a devastating close-up of cops smashing a kid to the ground.

Hill achieves this type of dramatic juxtaposition elsewhere in the film, which is dotted by spontaneous outbursts of violence that undercut the sun-speckled languor. In the first shot, Stevie’s older brother Ian throws him into a wall—a signal that this is going to be a “serious” movie—but their complex and abusive relationship never moves past Ian’s protective bullying (“You think you’re tough and shit? You’re just a little fucking kid”).

Hill told Terri Gross that he wanted to “explore male self-abuse,” which is a Sundance-approved way of saying that it’s hardcore but has feelings too. To his credit, Mid90s sensitively shows how boys often spurn the affection they desperately crave so as to fit an image of masculinity, and by the end the film, Stevie’s life is endangered by his friends’ boozy carelessness.

The film ends abruptly, and has little to say about the strained family relationships that drove Stevie to seek acceptance on the half pipe. Instead, we get an admittedly cool montage of skating footage, which, like the rest of the film, is pretty neat.