But it's a serviceable historical epic even if you're not a 14th-century history buff. C 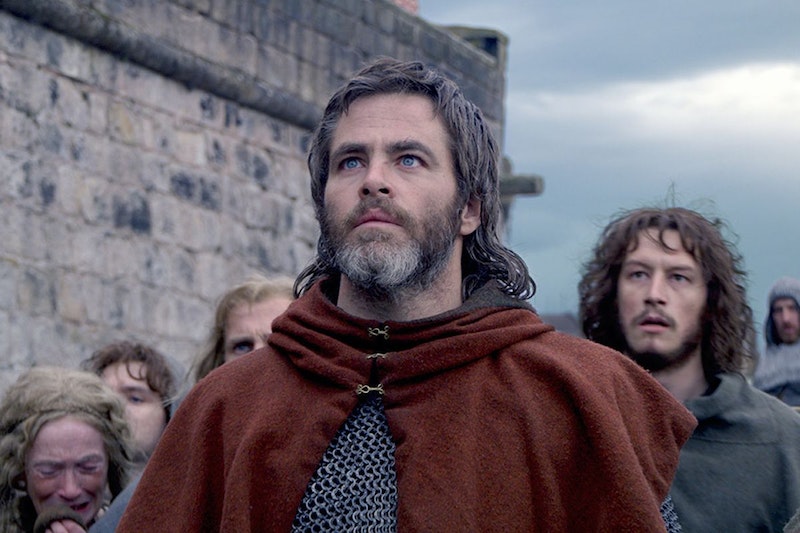 Outlaw King, the new film about the rise of the 14th-century Scottish king Robert the Bruce, raises a fascinating question: If Robert's revolt succeeded and William Wallace's failed, why did Wallace get a movie made about him almost 25 years earlier? The answer, it would appear, is that Mel Gibson would rather film himself being tortured than winning a war.

In Outlaw King, there's not so much torture, though a lot of blood and gore. It’s a decidedly pro-Scottish take on the First Scottish War of Independence, one that was filmed entirely in Scotland and even made by a Scottish director.

Outlaw King is an unofficial pseudo-sequel to Braveheart, picking up just before Wallace's death in 1305 and depicting the resulting rebellion led by Robert (Chris Pine) against the English crown. While the film lacks the ambition and epic scale of Gibson's 1995 Best Picture winner, Outlaw King is a worthwhile effort, driven by strong performances by Pine and Florence Pugh.

Outlaw King reportedly lost about 15 minutes of running time following its tepidly received debut at the Toronto Film Festival; as is, it's a length that feels about right. As the film begins, Wallace's revolt has failed and England and Scotland have reached an uneasy peace, with Robert and others asked to pledge fealty. But once the unseen Wallace is killed, the rebellion rises again, with Robert squaring off against the Prince of Wales (Generic British Handsome Guy Billy Howie). Meanwhile, Elizabeth de Burgh (Pugh) becomes Robert's queen and is placed in peril.

In the film, Pine once again widens his lead as the most magnetic of the current group of leading men named "Chris." He shined in Wonder Woman and was one of the best things about the otherwise forgettable A Wrinkle in Time. Here, he's convincing as the hero, even if his Scottish accent is lacking. It’d be a shame if Pine's brief full-frontal nude scene were the only thing anyone remembers from this performance, if not the film itself.

But Florence Pugh just about walks off with the movie, despite limited screen time. The 22-year-old English actress broke through last year with a truly chilling performance in the creepy, incongruously non-Shakespearean drama Lady Macbeth. Here, she's much more than just a love interest as Robert's bride, whose loyalties are ultimately tested.

Outlaw King, which is getting a theatrical release as well as a Netflix debut this week, was directed by David Mackenzie, who previously made 2016's great Hell or High Water, which also starred Pine; he's also one of five screenwriters. Like most medieval-based entertainment these days, Outlaw King owes a lot to Game of Thrones, with that series especially having an obvious influence on the battle scenes. Stephen Dillane, who played a king on Game of Thrones, does here as well.

It's a season for historically-based battle and intrigue between England and Scotland. Next month's Mary Queen of Scots depicts another such skirmish a couple of centuries later, although the English crown's enemy in the upcoming, 18th-century-set The Favourite is the French and not the Scots.

Outlaw King is no Braveheart, but it remains a serviceable historical epic even if you're not a 14th-century history buff. That, and the ending is much happier.