Film Review: Can You Ever Forgive Me? is Refreshingly Bleak 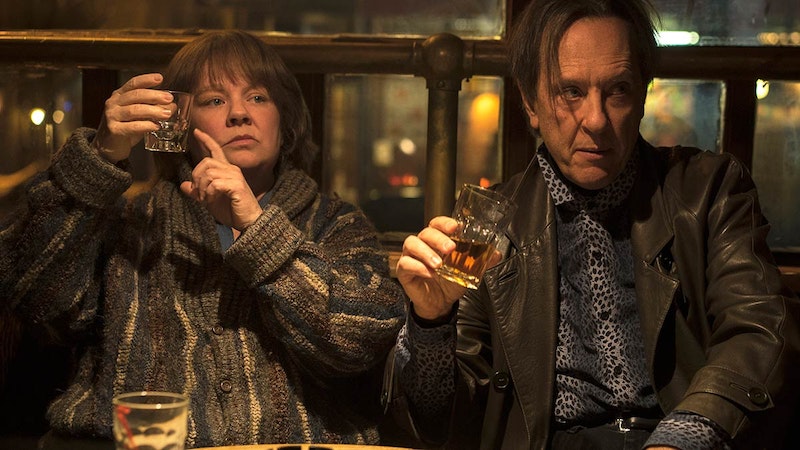 Few films with the MOR arthouse aesthetic and target demographic of Can You Ever Forgive Me? are as dour or downbeat. Marielle Heller’s second feature stars Melissa McCarthy as Lee Israel, a minor biographer and magazine contributor who only gained recognition through a brief life in crime: beginning in 1991, Israel forged nearly 400 letters “written by” celebrities like Dorothy Parker, Noël Coward, and Marlene Dietrich. Though these scraps of correspondence were of little to no value to the vast majority of people (hence their inevitable homes for decades: underneath furniture, buried under paperwork, or lost in libraries as forgotten bookmarks), each letter could fetch between $400 and $2,000, their price inevitably inflated along the way as they passed through countless private collections, research facilities, and auction houses.

Israel’s forgeries, a desperate attempt to make ends meet at a time when her career was in the tubes, became a runaway occupation, the kind of grift that imbues one with so much momentum and excitement that it becomes impossible to stop even as obvious dangers present themselves. Early on, we see Israel present a Noël Coward letter, forged signature and all, to a dealer in New York who responds enthusiastically, noting that a friend on the West Coast who knew Coward personally would be very interested in seeing these discoveries. This happens less than an hour into the movie, but strapped for cash, Israel has no other choice but to continue.

By 1993 the jig was up and by the grace of God Israel avoided any jail time, getting off with five years probation and six months house arrest. She died in 2014, six years after publishing the memoir from which this film takes its title, much to the chagrin of collectors who were scammed by Israel in the early-90s. The film begins in 1991 and almost completely elides Israel’s past successes and employers, focusing instead on the most grim and misanthropic period of her life. Wonderful! Really, Melissa McCarthy is fantastic in this, more than able as a crank but never the buffoon she so often plays in comedies. Israel was a lesbian who lived alone, had no children, and never succeeded in keeping long-term relationships going, if she ever wanted to. Dolly Wells is fantastic as a bookseller who asks Israel on a date (immediately after she swindled her).

The dinner they have is heartbreaking: Wells’ character so clearly crushing on someone who says she wants to be alone but is stuck in a state of extreme ambivalence. Their affection is mutual but Israel just cannot take that leap into being vulnerable, volatile, and truly alive again. Often in a scene like this, a character’s decision is a foregone conclusion from frame one, or a change is made obvious. McCarthy’s depiction of extreme ambivalence and her character’s romantic complexes is extraordinary, because we truly don’t know what is going to happen until they awkwardly part ways on the sidewalk, never to talk again.

Again, it’s refreshing to see a romantic subplot play out like this, a rejection of intimacy not due to misanthropy but of ambivalence, and perhaps a little cowardice. Israel’s only other friend is Jack Hock, played by Richard E. Grant in a semi-reprise/riff on his famous role as Withnail in Withnail & I. They are partners in degeneracy, Hock slinging coke and picking up young waiters in diners while Israel searches for more collectors to swindle.

Can You Ever Forgive Me? is full of unsympathetic people—everyone from the criminals to Israel’s discouraging agent (played by Jane Curtin), even to the seller shown in the final shot of the movie to knowingly put up a forged Dorothy Parker letter for sale—and that’s why it feels like a fresh gust amongst so many redemptive, feel-good, and emotionally two dimensional MOR barely art house pictures. I doubt it’ll have any legs going into awards season, but McCarthy deserves notice for her subtle and sad performance, and at the very least, this bodes well for her possibilities as a dramatic actor going forward.