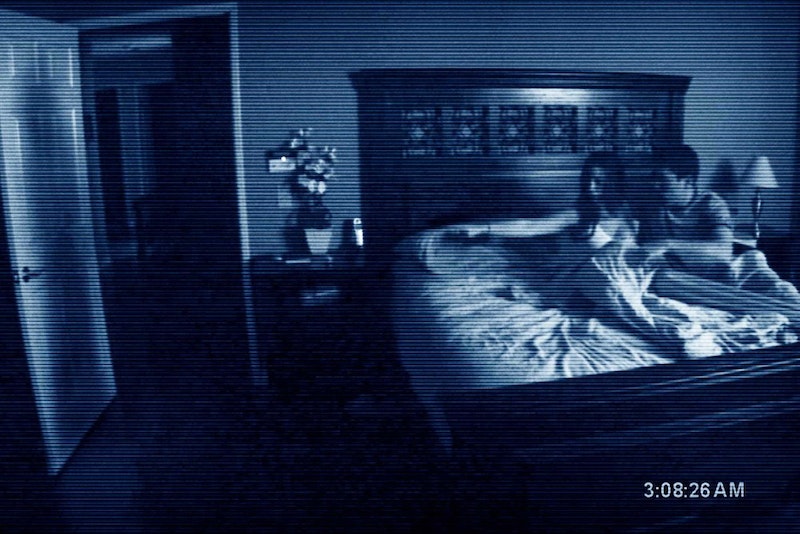 This is part of a series on Blumhouse horror films. The last entry on Ouija is here.

Action movie sequels, especially in the current era, often function as serialized continuations of the first film. Horror films, though, are less about narrative than mood, and spinning out the first can interfere with the second. As a result, horror sequels function as either remakes or separate films altogether. The Friday the 13th movies, for example, don't develop a plot or extend a narrative; they just give you more of Jason slaughtering people in inventive ways. Alternately, sequels to the Exorcist have little to do with the first except for a couple of tenuous thematic links to justify using the same title for marketing purposes.

Paranormal Activity 2 is, for a horror film, closely tied to its predecessor. It's a simultaneous sequel and prequel, unfolding at the same time as the first and (supposedly) adding background and depth. The first film snuffles at the edge of the second, haunting its protagonists and, eventually, possessing them. It's an impressively clever narrative achievement—though it still doesn't quite make for satisfying horror.

The original Paranormal Activity was an aggressively self-contained film, set entirely in the home of Katie (Katie Featherston) and Micah (Micah Sloat), as over a couple of weeks Katie is first haunted then possessed. The sequel focuses on the family of Katie's sister, Kristi (Sprague Grayden), and is less claustrophobic in several respects. It covers a longer period of time—starting with the birth of Kristi's son Hunter, and then fast-forwarding a year or so to the main events. It also includes a bigger cast, including Kristi's husband Dan (Brian Boland), step-daughter Ali (Molly Ephraim), their maid Martine (Vivis Cortez) and cameos by Micah and Katie from the first film. Stylistically, it's more professional. Kristi's family has multiple cameras installed in their comfortable suburban home as a security measure, so while the film is still technically found footage, it looks a lot more like a typical movie, as the filmmakers can cut between different angles, and most shots are steady rather than wobbling vertiginously.

Kristi's family is also happier than Katie's; she has a substantially better relationship with her husband than Katie has with Micah, and she also gets along well with her step-daughter.

As a result, the escalating paranormal events—pans swinging, doors closing—are less connected to Kristi's particular emotional trauma, or to a particular abusive relationship. Instead, they seem to come genuinely from outside. The suburban idyll isn't necessarily corrupt in itself; it's invaded by outside forces.

That outside force is the nameless demon from the first film, which is trying to get its invisible claws into baby Hunter. Towards that end, it possesses Kristi. But rather than murdering everyone in sight, as Katie does when she's possessed, Kristi mostly sleeps, and then is anti-climactically cured when Dan manages to perform an exorcism.

That should be a happy ending of sorts; the suburban family is restored to health, the demon's gone. The problem is that Dan, to save his wife and child, had to send the demon over to a blood relative, i.e. Katie.

It's significant that earlier in the movie, when Kristi asks her older sister for advice about the demonic phenomenon, Katie tells her to keep silent about it. The two experienced paranormal phenomenon when they were kids, and Katie believes that paying attention to the demon only encourages it and makes it stronger. The proper course is silence. The lesson is that abuse, and monstrosity must be ignored and repressed.

That advice predictably backfires. The repressed returns in the form of Katie herself. Possessed, Katie murders Micah (as seen in the first film) then returns to her sister's house, where she kills her brother-in-law and Kristi, and steals the baby. Family secrets, hatred, and pain can be shoved into the basement, but they'll come back and eat you. Kristi's happy family is shadowed by Katie's ugly relationship.

But why should Kristi be haunted by her sister's unhappiness? The problem with Paranormal Activity 2 is that it never answers that question. The complex narrative interweaving of the two films is never matched by a similarly complex examination of Kristi and Katie's family. We never learn much about their parents for example—you can read in an abusive childhood, but there's not much evidence for it in the movie. Nor are Kristi and Katie ever at odds over anything; they seem to have a healthy, loving relationship.

We know from Paranormal Activity why Katie would want to kill Micah—he's an abusive jerk. But there's no reason for her to want to kill her sister. The haunting in the first film is anchored in an understandable emotional dynamic. The murders in the second are just an arbitrary homage to the first. Dan sacrifices his sister-in-law to save his wife, but that desperate decision isn't anchored to any tension between Dan and Katie, nor to any other history we can learn about. It's just a last minute twist required to explain the first film.

Despite its ambitions, Paranormal Activity 2 ends up demonstrating why horror sequels are so often not very sequential. Kristi and Dan need to be at the center of their own nightmare for the movie to work. But instead they're possessed by someone else's problem, and someone else's plot. Demons are individual critters; they don't mean as much when you sublet them, even to your sister.