The biggest swing-and-miss of any film this year. C 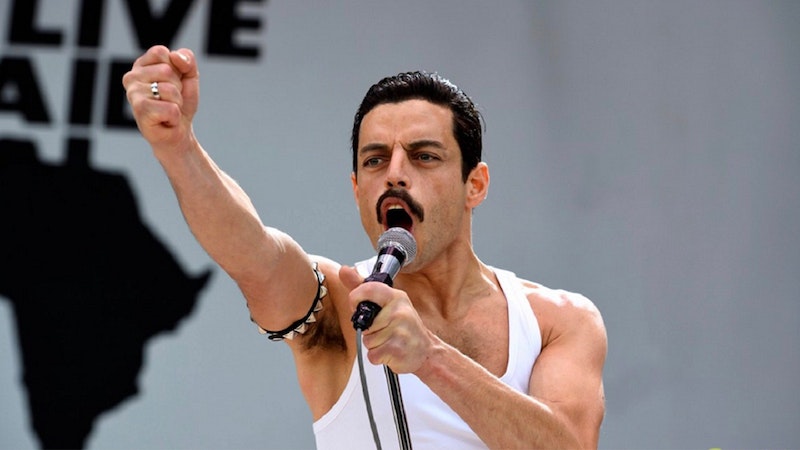 Bohemian Rhapsody, the long-awaited biopic of Queen and its late front man Freddie Mercury, was simultaneously one of the films this year I was most looking forward to, and the one I was most worried the filmmakers would screw up. My worries were well-founded.

Bohemian Rhapsody has a revelatory, go-for-broke performance from Rami Malek in the lead role, and access to some of the greatest rock songs in history, which are mostly used well. The film ends with a pretty outstanding recreation of the band's famous Live Aid performance from 1985. But other than that, it's a toothless, compromised mess, one that doesn’t seem to have more than a passing understanding of its real-life protagonist. Bohemian Rhapsody is the biggest swing-and-miss of any film this year.

Freddie Mercury, who died of an AIDS-related death in 1991, was one of the most colorful and charismatic rock front men. He was a fantastic, flamboyant real-life character, who had a compelling arc, one that's naturally cinematic. A movie about him, done right, could’ve been great. Bohemian Rhapsody isn't done right, and isn't great. It hits every beat that's familiar from every other rock biopic. There're humble beginnings. There's the introduction, as if on cue, of drugs. There's inter-band strife. There's the hero suddenly becoming an asshole for about 15 minutes and then getting over it just as quickly. And ludicrously, the film is rated PG-13. There's no way to do Freddie Mercury's story justice without an R.

Malek plays Mercury, from the band's formation in 1971 up until Live Aid in 1985. He's believable at all of the ages, which is more than I can say for Ben Hardy, who plays Roger Taylor and looks 23 at all times. We see the band's rise, as they tour the world, as well as some decent scenes of them in the studio, which are reminiscent of the Pet Sounds sessions in Love & Mercy. That 2015 Brian Wilson film, between its unconventional structure and raw honesty, should’ve served as more of a template for the Queen biopic.

We also follow Mercury during his early marriage to Mary Austin (Lucy Boynton), and during various relationships with men. The film, as silly rumors suggested a year ago, does not omit or cover up that Mercury was gay. Nevertheless, Bohemian Rhapsody is incongruously chaste, with the camera seeming to strategically cut away from anything that shows even a hint of overt queer sexuality. And the introduction of Mercury's late-in-life partner is given almost no development.

If you don't know the history of the project, Sacha Baron Cohen was, for a period of time, attached to play Mercury and possibly direct. It was practically a perfect casting fit—Baron Cohen has enough of a resemblance, and the singing voice, and has never shied away from either aggressive physical acting, or from playing gay.

If the trade industry reporting is to be believed, the comedian was planning a hard-R version of Mercury's story, likely with lots of on-screen sex and an extended telling of his illness and death—an arena rock version of Steven Soderbergh's Liberace biopic, Behind the Candelabra. It’s the sort of film that, combined with Queen’s great catalogue, might’ve been a classic.

But surviving band members Brian May and Roger Taylor wanted a happier and more sanitized version, and they won the day. Malek was cast, with Bryan Singer directing. Singer, in turn, was fired late in production due to some combination of his disappearing from the set and renewed #MeToo-related allegations, leading Dexter Fletcher to finish the film, although Singer is the credited director.

Overall, like a lot of recent music biopics, Bohemian Rhapsody comes across as self-serving, on the part of the band members who had a hand in the production. Over and over, the film shows May and Taylor winning arguments, having key ideas, and (worst of all) appearing to pull Mercury away from his opulent gay life back towards the studio. On top of its willingness to cave to every whim demanded by its subject/producers, the script, credited to Theory of Everything and Darkest Hour veteran Anthony McCarten, is sloppy.

The band comes together to solve a dispute over money and songwriting credit, which was never even hinted at previously in the film. A reconciliation between Mercury and his old-world parents feels totally unearned. Early on, they refuse to accept his music or lifestyle. Then, they disappear from the movie for 90 minutes, and then suddenly accept him. We're given no indication as to why or how.

Why don't we see Queen's collaboration with David Bowie on "Under Pressure"? What about the time Mercury recorded with Michael Jackson but cut it short due to his discomfort with the singer's pet llama? And speaking of animals, Mercury's two cats get more development than most of the human characters.

While Malek changes his appearance dramatically throughout the film, we never see him sick. The script even fudges the timeline of his diagnosis, placing it before Live Aid rather than after and creating an entire overarching third-act motivation that didn't really take place.

And Bohemian Rhapsody also contains the worst movie scene of the year. The band and their managers are arguing, in 1975, about whether or not the song "Bohemian Rhapsody" is too long to be a single. This comes in the era of "Stairway to Heaven" and "American Pie," but never mind. Mike Myers is in the scene, which considering his history with the title track is about a C+ joke at best. But then he says a line so obvious, that I audibly blurted out "Oh, come on!"