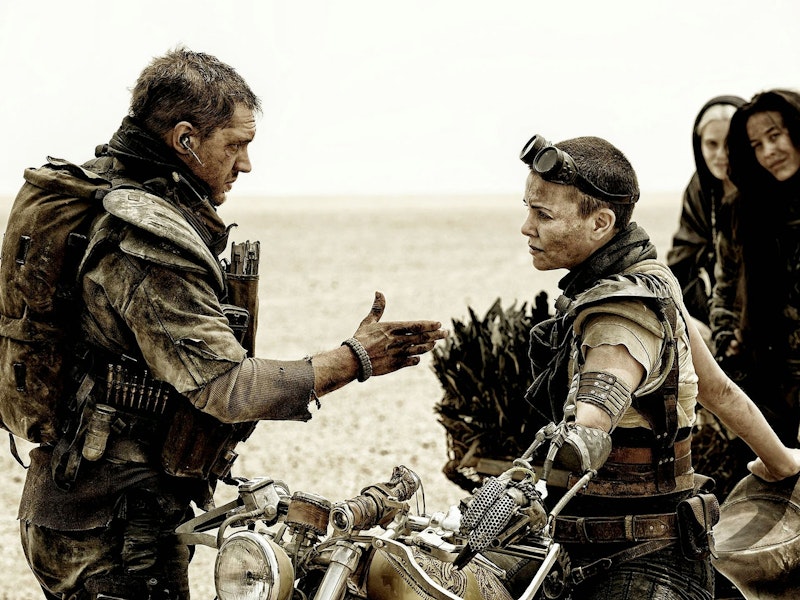 In post-apocalyptic Australia, a male road warrior is captured and press-ganged into service as a plasma donor for a rig driver. When a convoy of this craven empire—led by a female road warrior—goes rogue, all hell breaks loose, and the two road warriors become unlikely allies in a battle for survival against all odds. Their cargo? Gasoline, but also the emperor’s escaping brides. A soldier of the empire joins a crusade eventually aided and abetted by a bad-ass motorcycle gang of leathery elderly matriarchs.

Though the very idea of synopsizing seems superfluous, that’s the plot of Mad Max: Road Fury in a singed nutshell; it’s probably more than anyone needs to know to enjoy it. What else? You want more? Well, Tom Hardy plays the titular road warrior with a (mostly) stoic, shit-happens shrug; Charlize Theron plays the other road warrior with steely, armless cool; and the movie as a whole is a gigantic, CGI-enhanced chase scene with occasional interruptions. A lot of steroidal muscle cars-cum-rigs collide violently as baddies cling to or leap from towering poles attached to said rigs.

Metal twists metal at insane velocities through deserts and nuclear tornadoes and bizarre landscapes left unexplained because, fuck it, director George Miller has too much faith in his audience’s ability to parse contexts. There’s a plethora of minor details and Easter eggs and world-building largesse everywhere guaranteed to reward anyone willing to hurdle through this nightmare more than twice, from the freak guitarist leashed to an empire sound truck, peeling off heavy metal riffs; to the antique foot measure welded into the floorboard of the protagonists’ main rig; to the Herculean efforts of the costume design team, who deserve an Oscar.

Sure, one can find political grist to mill here in the notion of a matriarchy vs. patriarchy showdown or the hoary despot lording control of a water spigot over unwashed hordes. But voluminous escapism is really the name of the game here—from real life, from whatever’s afoot on Twitter, even from the 1970s/80s films this Road Fury is ostensibly rebooting, if you can even remember them. Forcing this movie to make logical or pure narrative sense or getting bent out of shape because some of the model-level prisoner brides turn out to be full-on bad-asses—I was especially enamored on the one who knew how to load firearms and had a toothpick lodged in the corner of her mouth, because in this desperate future, toothpicks?—is totally besides the point here. This was fun.