Game of Thrones Recap 5x4 - "The Sons of the Harpy" 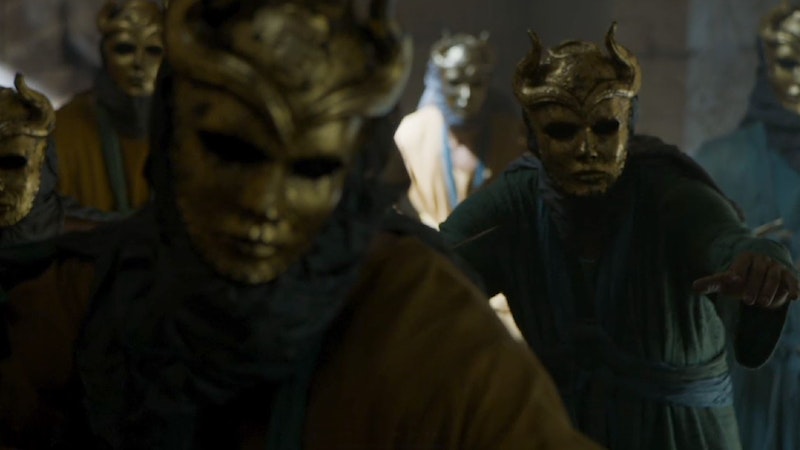 Meereen is in full uprising. I hate to start a review at the end of an episode but we’re all wondering if Grey Worm and Ser Barristan died. I have my doubts. GoT isn’t shy about on-screen deaths—this is a show that explicitly kills off main characters all the time, brutally, and even the least explicit death scenes (Ned Stark’s execution in season one, for example) aren’t vague about what happened. The fact that Grey Worm and Ser Barristan could be alive, makes me think they are (though likely recuperating for a while, which also makes me think Daenerys may welcome back Ser Jorah).

Speaking of Ser Jorah, it doesn’t take long for Tyrion to work out who he is and what he’s doing. It’s a fantastic scene, as the two make their way down the river to Meereen, and Tyrion is amused to find out Jorah’s taking him where he was already going; “What a waste of a good kidnapping.” Tyron describes Jorah’s plan as “desperate,” and it is, but the fact that he works out his particular situation so quickly just proves Varys right, he’s exactly the kind of advisor Daenerys needs, and I can’t wait to have the two of them together.

Elsewhere, Jaime and Bronn arrive in Dorne, only to come upon trouble almost immediately, as four Dornish soldiers discover them walking along the beach. Jaime has his first real sword fight since losing his right hand, and finds out that a metal replacement actually has its uses, grabbing the Dornish soldier’s sword before stabbing him through the chest. Little do they know that their former ship’s captain sold them out to the Sand Snakes, daughters of the late Prince Oberyn. Getting in and out of the Water Gardens just got that much harder.

Meanwhile, Cersei continues to complicate things for Queen Margaery, sending away Mace Tyrell to renegotiate terms with the Iron Bank, escorted by Ser Meryn, who may or may not be intended as his executioner. Either way, Arya waits in Braavos, and with Ser Meryn on her list, she might just scratch off a name sooner rather than later. Afterwards, Cersei empowers the High Sparrow and the Faith Militant to punish whatever wickedness they find in King’s Landing, specifically in Littlefinger’s brothel. When they arrest Ser Loras, Margaery demands King Tommen free him, and we find out not only how weak Tommen is, but also how dangerous Cerise’s new allies are—shouting down the King as an abomination.

Up North, there’s a nice scene between Stannis and his daughter, who tells her how he refused to send her away to the Stone Men after she contracted greyscale as a baby—“You are the Princess Shireen of House Baratheon. And you are my daughter.” It’s an oddly affecting scene for Stannis, a character who is, if not unlikable, often forgettable.

Back at Winterfell, we get another story from the past, as Sansa keeps a candle burning in the crypts, and Littlefinger tells her about the start of Robert’s Rebellion, and Lord Whent’s great tourney at Harrenhal. If nothing else, it’s a reminder of just how long Littlefinger has been around, scheming—“You can imagine what is was like for me, a boy from nowhere, with nothing to his name, watching these legendary men tilting at the lists.” He tells Sansa that Cersei has sent for him, and that he must return to King’s Landing, but promises her things will be okay; Stannis will soon be riding south. “You think he can defeat the Boltons?” Sansa asks. “He has a larger army,” Littlefinger tells her. “He’s the finest military commander in Westeros. A betting man would put his money on Stannis. As it happens, I am a betting man.” If Stannis wins, he’ll name Sansa Wardeness of the North, and for the first time Sansa understands just what sort of power she’s been positioned for.