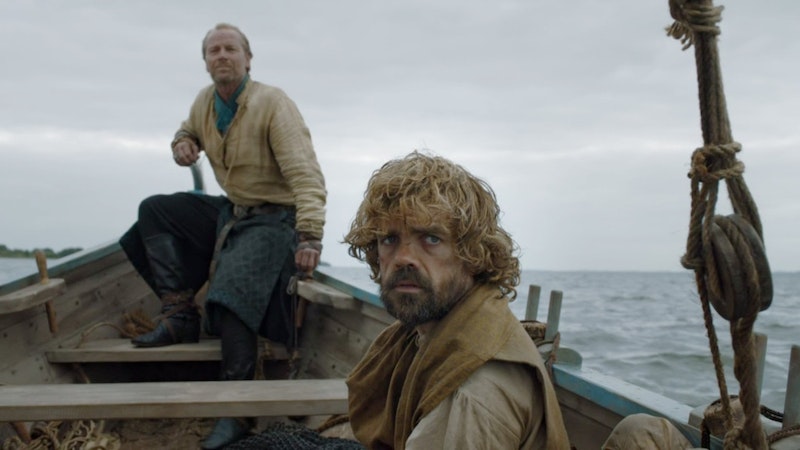 Well, I was half right. While Grey Worm survived the Sons of the Harpy uprising, Ser Barristan did not. It’s rather disappointing that for a knight as renowned as Ser Barristan it took five seasons to finally see him draw his sword—his first fight scene was also his last. Deanerys rounds up the leaders of Meereen’s great families and feeds one of them to her dragons. “Who is innocent?” she asks. “Maybe all of you are, maybe none of you are. Maybe, I should let the dragons decide…” And runs her hand along Hizdahr’s back.

Later in the episode, Missandei offers her own advice: “I have seen you listen to your counselors. I have seen you lean on their experience when your own is lacking… and I have seen you ignore your counselors, because there was a better choice. One that only you can see.” So Deanerys visits Hizdahr in his cell, who begs for mercy, unaware that Deanerys has decided on a compromise: she’ll reopen the fighting pits, though only free men will be allowed to fight. And she’ll marry the leader of a great family—“Thankfully a suitor is already on his knees.”

At Castle Black, Jon Snow is given much the same advice by Maester Aemon—“Kill the boy and let the man be born.” Winter is coming, and Jon wants to bring the Wildlings south of the Wall, before it’s too late—as he tells the rest of the Night’s Watch, “we can learn to live with the Wildlings, or we can add them to the army of the dead.” Tormund agrees to help, but only if Jon goes with him to Hardhome. Stannis lends his fleet, and consults with Samwell, who’s busy studying old books in the library, trying to figure out why his dragonglass dagger would kill a White Walker. “Keep reading,” Stannis tells him, before ordering Ser Davos to ready the troops. They can’t wait any longer to march on Winterfell.

Meanwhile, Sansa has the inevitable run-in with Theon (Reek), which leads to an incredibly awkward dinner with the Boltons. Ramsay brings in Reek and makes him apologize to Sansa for killing her two brothers, and announces that Reek will give away Sansa at their wedding. Roose has an announcement of his own: Walda’s pregnant. “From the way she’s carrying, Maester Walkin says it looks like a boy.”

Ramsay is understandably worried about his position—“I’m your son… until a better alternative comes along”—which prompts Roose to tell him about his mother, a peasant girl he raped. “A year later she came to my gates with a squalling baby in her arms… I nearly had her whipped, and the child thrown in the river.” It’s not the most endearing story, especially compared to Stannis’ scene last week with his daughter. Still, it works for Ramsay, who agrees to help his father defeat Stannis—“the North is ours, it’s yours and mine.”

And Stannis’ mention last week of the Valyrian ruins and the Stonemen comes back around, as Jorah and Tyrion sail down the Smoking Sea, only to be distracted by Deanerys’ errant dragon before they’re attacked by the Stonemen. Tyrion nearly drowns but the two of them manage a Walking Dead-style escape—cut to black, then show them safe on a distant shore. Or, safe enough at least. Tyrion is fine, but Jorah lifts a part of his sleeve to show he’s contracted Greyscale. The disease can’t be cured, but it can be stopped, and I have to assume this won’t be the end of Jorah—otherwise what a particularly odd divergent storyline.