Well, there are some sixes. 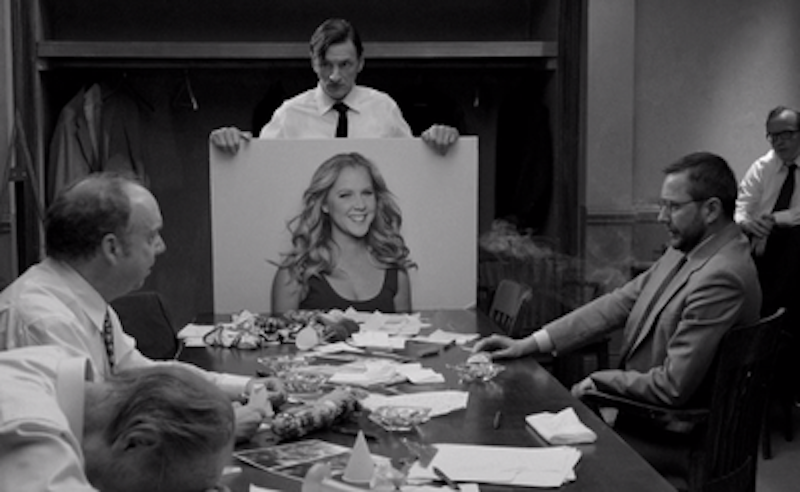 Viewed full on, John Hawkes has a face that's like a lemur trapped behind a jagged piece of rock; his pop eyes, dangerously near each other, peer from just beyond his pointed outcropping of nose. He has the Henry Fonda part in the 12 Angry Men parody Amy Schumer just ran on her show. He's the rangy, cool-headed humanitarian who talks everyone toward reason. Schumer doesn't have to be hot to get on TV, says the man with the beak and the pop eyes. She just has to give you a bit of a chub, a reasonable chub. “That's all our system demands,” he reminds his colleagues. Paul Giamatti will have none of it. “She's built like a lineman,” he shouts. “She has Cabbage Patch–like features. And her ass... her ass makes me furious.” The blooper reel at the episode's end has a better rendition of that line, just before Schumer sneaks up on Giamatti for a goof. This time he's bleak when he says it; he's a man staring into nothing.

The sketch runs about 20 minutes and is built on one joke: these ugly men, the jurors, get to decide if Schumer is hot. Okay, two jokes, because they're very self-important about it: the no votes are indignant, Hawkes is beautifully earnest and fair-minded. Guys debating a girl's hotness take themselves as seriously as a bunch of Actors Studio heavyweights deciding a murder trial—I guess that would be the idea. All in black and white, and with people wearing shirts and ties like the old days. There's business about the heat, as in the original, and men stand up and start shouting at each other during key moments.

But the best bits come from Hawkes, the quiet man: the reflective, attentive shift of his gaze toward a colleague as he takes in what the man says, the tender half-smile as he considers our common human heritage (the old juror is talking about how ugly girls really give it in bed), the tenor thrill to his voice when he's forced to speak up for simple fairness. Giamatti gets the second-most airtime but isn't nearly as good; he plays it so broad that he has an ongoing fit of spluttering. The no vote who really helps the sketch is Nick Di Paolo, the Lee J. Cobb stand-in. He's loud but funny, and he and Henry Zebrowski (that's the Jack Warden guy, the juror who has tickets to the Garbage Dick Tour) pin together a sequence at the sketch's beginning where everybody chats and mills about, finding their seats. A minute and a half without cuts, and these two are the actors who move from foreground to background, leading the camera behind them. It's an ambitious sequence, and it makes the sketch funnier just by making it more like 12 Angry Men.

What the sketch doesn't have is a whole lot of Amy Schumer. This is the second time in a row that she has sat out most of a showcase number; last week it was the rape culture sketch about football. These are calculated sacrifices done for the cause: if you're going to make fun of sexism, men will tend to get airtime. It's not fair, but not a whole lot is.