Arya is initiaed, Sansa is married. 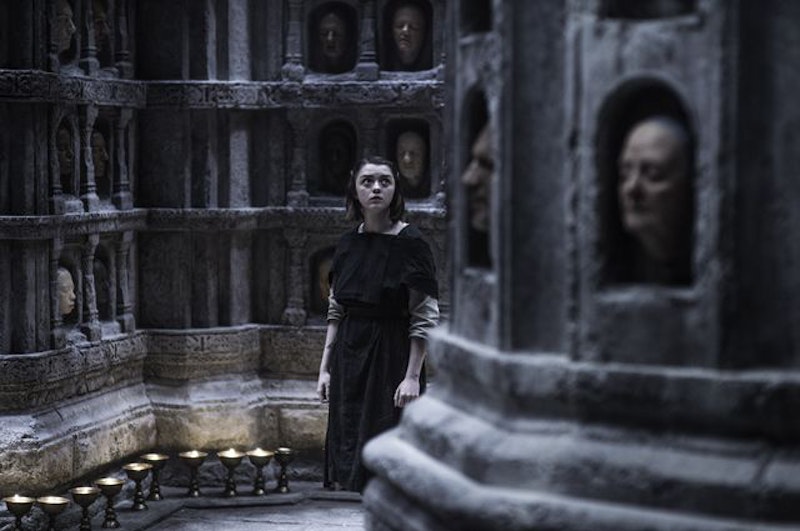 Game of Thrones is maybe the best show on TV when it comes to mixing light comedy with the truly horrific. In an episode that ends with Sansa’s brutal, humiliating rape by Ramsay Bolton, as Reek is ordered to watch, we also have Tyrian bartering with a slaver about cock merchants, Bronn muttering “Oh, for fuck’s sake” after a run-in with the Sand Snakes and a terse back-and-forth between Cersei and Olenna Tyrell—“Ah yes, the famous tart-tongued Queen of Thorns…” “And the famous tart, Queen Cersei.”

In Braavos, Arya is finally initiated by Jaqen H’ghar into the Faceless Men, though he understands her hesitation—“A girl is not ready to become no one… Though she is ready to become someone else.” We also find out that the dead bodies Arya has been washing end up as sacrifices to the Many-Faced God, and masks for the Faceless Men. The only question is: How long till Ser Meryn arrives in Braavos to be Arya’s first kill.

Meanwhile, Tyrian and Ser Jorah have perhaps found unlikely salvation thanks to a slave ship. Tyrian convinces the captain that they should go to Meereen, where Ser Jorah (“one of the great warriors in the Seven Kingdoms… they wrote songs about him!”) can fight in the newly-reopened fighting pits. He also saves himself after the captain orders his throat cut and cock chopped off—“We’ll sell it for a fortune; a dwarf’s cock has magic powers.” How will a merchant know it was a dwarf’s cock unless he sees the dwarf, Tyrian argues, prompting truly the show’s best line: “The dwarf lives till we find a cock merchant.”

Back in King’s Landing, Olenna arrives to free Ser Loras from the Sparrows. Of all the amazing actors on GoT, Diana Rigg may be my favorite. She can make a throwaway scene amazing, as when her carriage stops on the road to King’s Landing and she gazes out on the city—“You can smell the shit from five miles away!” Olenna knows that Cersei has encouraged this recent fanaticism, but can’t fathom the extent to which Cersei will go to destroy the Tyrells. I don’t understand Cersei’s plan at all. Littlefinger has already told her about Sansa’s betrothal to Ramsay Bolton, so you’d think she’d want to keep the Lannister-Tyrell alliance strong. Still, the inquest does not go well for Loras, or Queen Margaery, who’s imprisoned after Olyvar’s damning testimony—“Bearing false witness before the Gods is as great a sin as any.”

And while Jaime and Bronn make it to the Water Gardens and find Myrcella, the Sand Snakes are there to interrupt their quick escape. Dornish guards break things up quickly and arrest everyone, though not before Nymeria kidnaps Myrcella, and Bronn is cut on the arm (let's hope the Sand Snakes aren't as proficient in poison as Oberyn was). Bronn's gentle mocking of Tyene—"You fight pretty good for a little girl"—makes me think these two might just have something.

Jokes aside, Sansa is trying her best to follow Littlefinger's advice—"There's no justice in the world, not unless we make it"—while Littlefinger convinces Cersei to let the Knights of the Vale take care of things at Winterfell. After Stannis attacks, Littlefinger figures that no matter who wins, the Knights of the Vale will best them. With the Boltons dead, Cersei will name Littlefinger Warden of the North, at which point he'll turn on Cersei and marry Sansa himself—the final betrayal. A complicated plan, though Littlefinger may be the only character on GoT who's truly thinking Big Picture.